Over 40 students and faculty gathered on the Storke Tower lawn Thursday evening for a vigil in support of survivors of sexual assault and in opposition to the federal government’s repeal of campus sexual assault policies.

The event was part of the National Vigil for Survivors of Campus Sexual Assault, a national demonstration of solidarity with survivors in response to recent threats to campus sexual assault policies.

Ro’Shawndra “Ro” Earvin, a fourth-year religious studies major, hosted the UCSB vigil and spoke about her own experiences with sexual assault on campus and the way the university responded.

“I did not have justice,” she said to the group. “I am using my voice today and I pray that you all continue to use your voices to change somebody else’s life.” 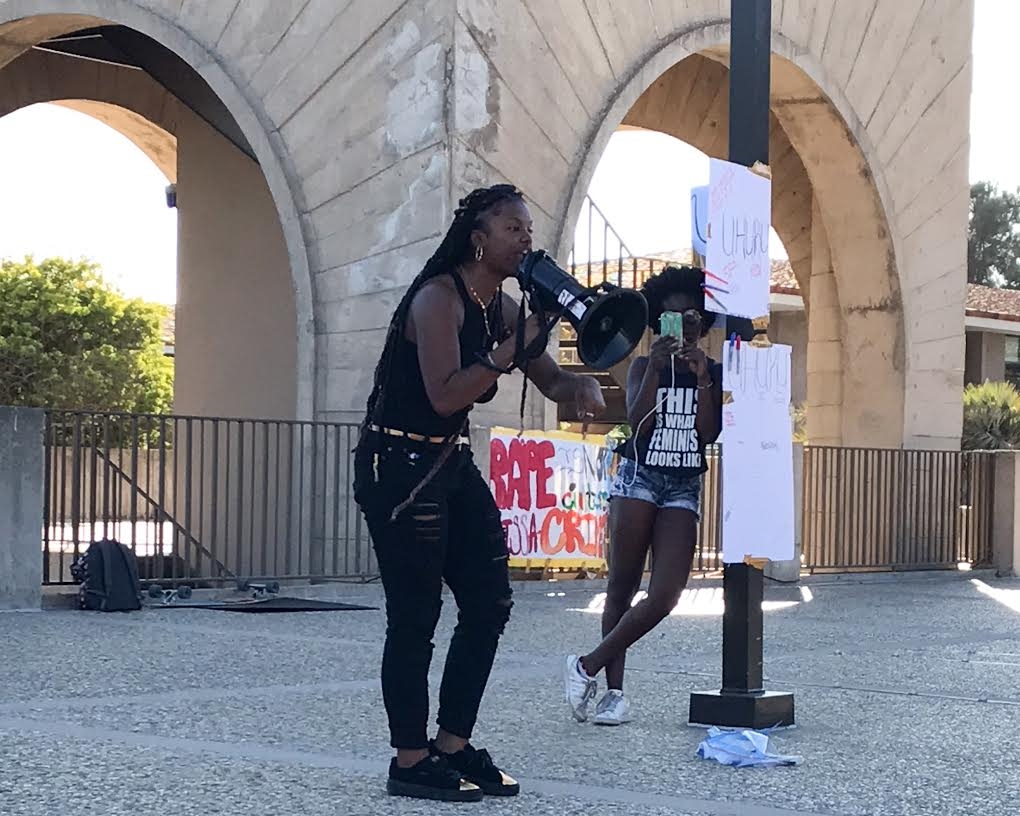 Ro’Shawndra “Ro” Earvin read aloud a list of demands addressed to the university at the Thursday vigil. She intends the demands to improve the way UCSB handles cases of sexual violence. Evelyn Spence / Daily Nexus

Earvin invited vigil attendees to write down what freedom means to them on a poster board that read “Uhuru,” a word that means “freedom” in Swahili. When the vigil ended, student expressions covered the board.

“Freedom is not being scared to live my life,” one student wrote. Another student wrote that freedom is “not breaking down” every time they think about their experience of sexual assault.

“Freedom is knowing my loved ones will be beside me when I feel whole again one day,” another attendee added to the board.

The word “Uhuru” was also spelled out with tape and candles in front of Storke Tower. Attendees planned to light the candles once the sun went down but were unable to do so because of strong winds.

Approximately 650 survivors and allies attended the main vigil in Washington, D.C. in front of the U.S. Department of Education. News and support of the event spread through hashtags such as #StopBetsy and #SupportSurvivors.

UCSB was the only UC to participate in the national vigil. 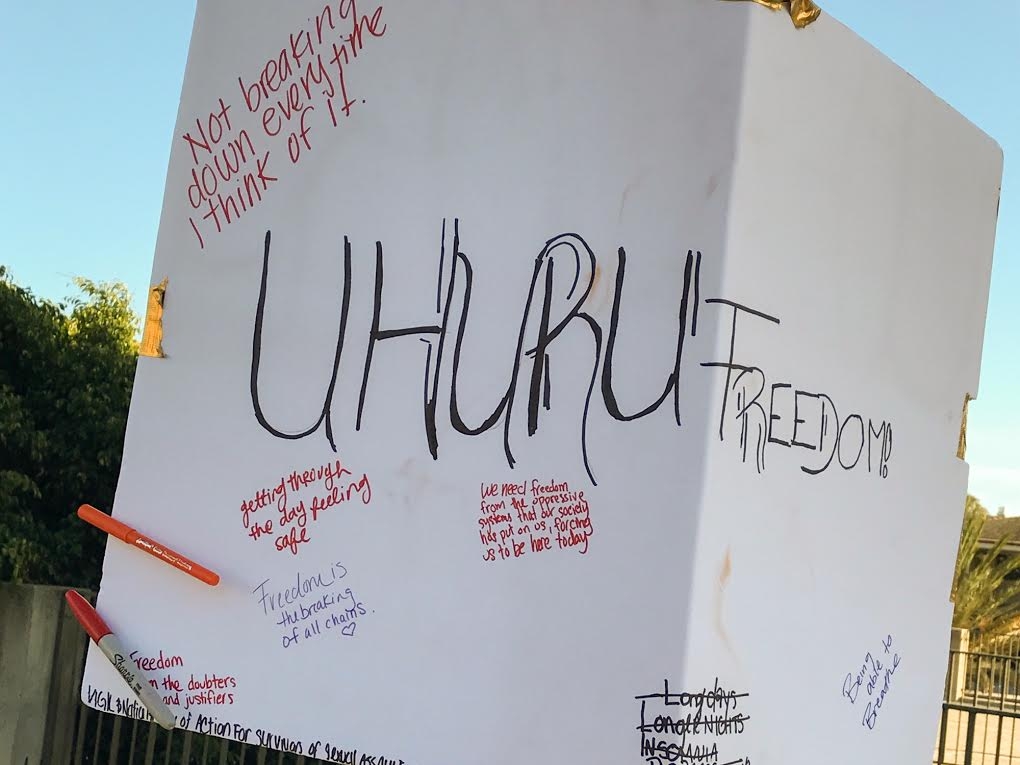 Earvin said she wanted to host a vigil at UCSB to draw attention to the survivors of sexual assault and to urge students to take action when they see injustice.

Earvin also read aloud a list of demands addressed to the university, such as creating and funding a Survivor Resource Center in Isla Vista, changing how law enforcement handles sexual assault investigations and providing education on sexual assault and interpersonal violence for the UCSB fraternity and sorority system.

Students presented the list of demands to Chancellor Henry T. Yang at a meeting in May that lasted nearly nine hours. The university has since met several of the demands, such as providing mandatory sensitivity training for the UC Police Department to address sexual assault and interpersonal violence as well as changing jurisdiction and protocol for how cases are managed.

Earvin said the Isla Vista Foot Patrol changed the jurisdiction for cases by hiring a full-time detective with specialized training in sexual assault investigations in September.

Faculty members from UCSB’s Campus Advocacy, Resources and Education (C.A.R.E.) office also attended the vigil. C.A.R.E. director Briana Conway said she believes the vigil was a good opportunity for UCSB to take part in the national dialogue about sexual assault on college campuses.

“The more often that we can engage in honest, thoughtful conversations, [the more] we can work towards creating change and creating improvements for our students,” Conway told the Nexus.

“The survivors I serve every year are in my thoughts and on my mind more days than they’re not,” she added.

Earvin said she wants sexual assault survivors at UCSB to understand their own power to share their stories and know there is “hope for the future.”

“I know that [the vigil is] going to help somebody,” Earvin said. “It’s gonna make somebody not want to be silent, make somebody wanna shout from the top of their lungs.”

Why don’t you have a vigil for the student who was screwed over by Sandra Vasquez and UCSB’s Title IX office last year? Because you don’t care about “freedom” unless it suits you. Thank you Betsy DeVos for ending the unjust and ideologically motivated Dear Colleague Letter!