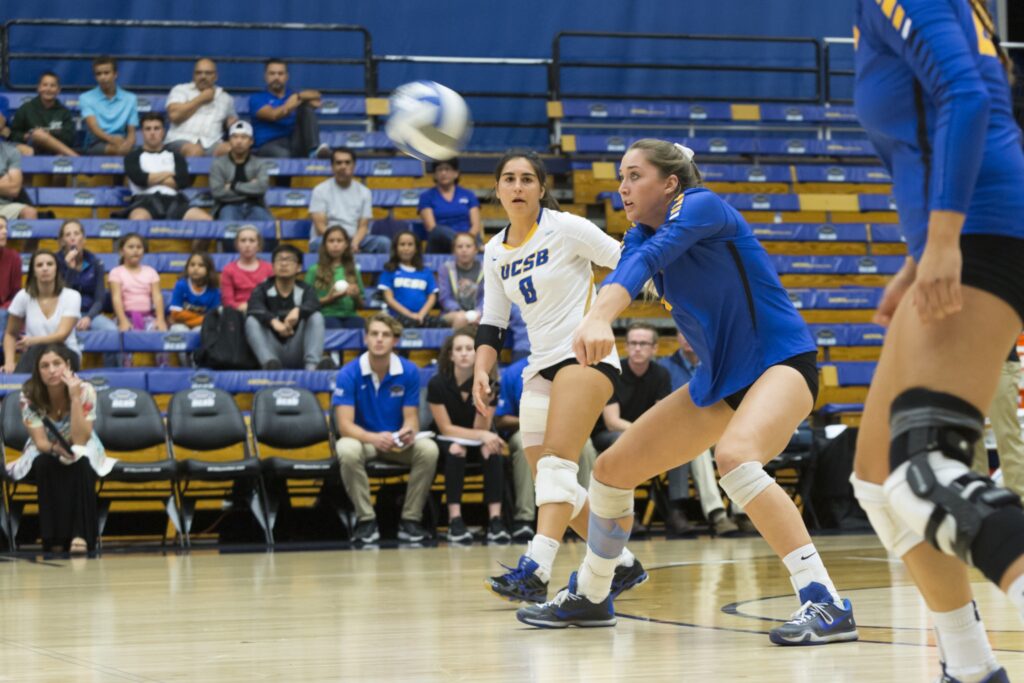 Lindsey Ruddins passes passes a ball up the middle of the court. Dustin Harris / Daily Nexus

UCSB’s star outside hitter Lindsey Ruddins had 26 of those kills, over half of her team’s attacking production.

No other Gaucho had more than ten kills, and only two had more than five. Compare that to the Aggies, who had three players above ten kills and another with eight, and UCSB’s lack of attack diversity is stark.

That didn’t matter on Tuesday night, however. Ruddins was all the offensive power the Gauchos needed, finishing with her second-highest kill total in a four-set match all season. The redshirt sophomore also led UCSB with 15 digs in her sixth double-double match of the season and her second in Big West play.

Counting Tuesday night, Ruddins has led the Gauchos in kills in 14 of the team’s 19 games, and has done so in every Big West match thus far. Tuesday night’s result was just one of the more extreme occurrences of what has become a major trend for UCSB.

To be clear, though, the win over the Aggies was not just a one-woman show. Libero Emilia Petrarchi also registered double-digit digs with 10. Petrarchi has finished with at least 10 kills in every game so far this season, a streak that’s landed the junior in the top-50 nationally in digs per set. She enter the weekday match No. 42 in the nation with a 4.94 average.

Annie Hasselmann had a game-high 40 assists in her role as UCSB’s setter, the player who sets Ruddins up to post her wild statlines. Hasselmann put up a well-balanced statline of five kills, five digs and a service ace to go with her pile of assists, serving as a sort of Swiss Army knife for the Gauchos.

As a team, UCSB hit at a .242 percentage, the team’s highest rate since its loss to Cal State Northridge on Sept. 9. It was the ninth time the Gauchos cracked the .200 threshold all season. Unsurprisingly, all four of the Gauchos’ wins have come in games they’ve hit at a clip above that mark.

UC Davis was only a beat behind UCSB in hitting percentage, as the Aggies hit at a .238 clip. That .004 gap, along with the Gauchos’ seven service aces, helped make the difference. UCD had more kills than UCSB in the final set, but the Aggies’ eight errors to Santa Barbara’s four doomed the hosts.

They might have only needed four sets to take the win, but the Gauchos were never truly comfortable on Tuesday night. Their largest lead was five, which the Aggies promptly turned into a one-point deficit over the next four points.

The final set was intense and went back-and-forth, with the Gauchos managing only an 18-14 lead as their largest advantage. Just as they had done when down five, UCD quickly cleaned up the deficit, this time tying the match up at 18.

Both teams played continuously exchanged points down the stretch of that fourth set. Davis managed to take a 23-22 lead, its first advantage since it led 4-3 early on, but UCSB won four of the next five points to clinch the match.

Next up for UCSB is a back-to-back against Long Beach State on Friday, followed by Cal State Northridge on Saturday night. Both games will begin at 7 p.m. in the Thunderdome, and will give the Gauchos two chances to avenge earlier conference losses to both opponents.