The Daily Nexus
Volleyball
Women’s Volleyball Hopes to Pull off Upset Over Surging Mustangs
October 12, 2017 at 5:00 am by Spencer Ault 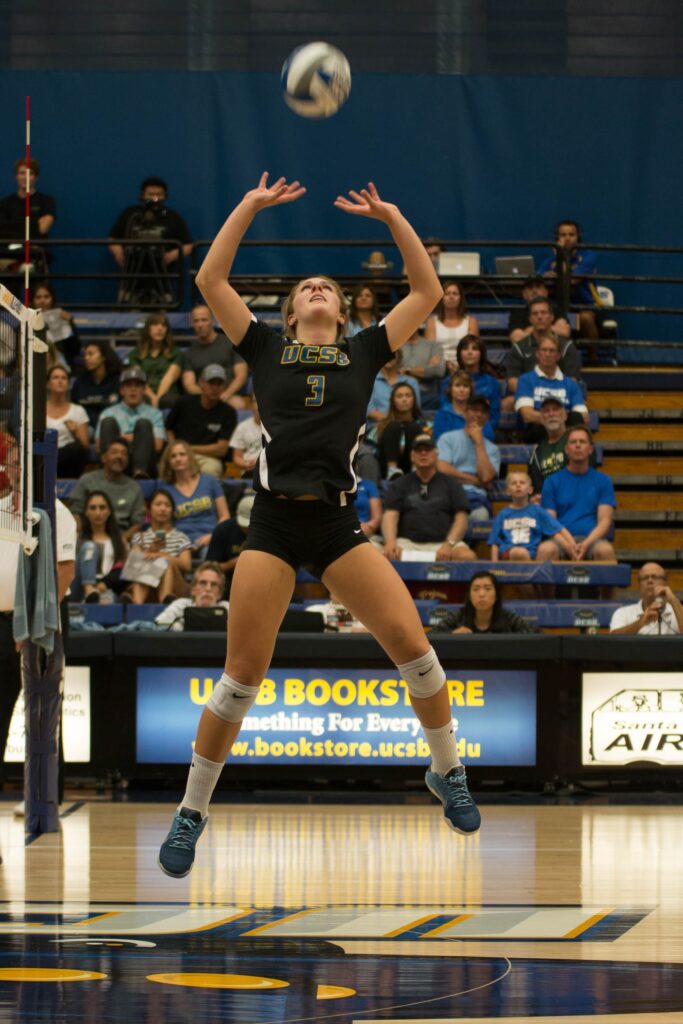 Sitting at 3-14 and 2-3 in Big West play and landing in the middle of the conference standings, the UCSB women’s volleyball team is at a crossroads.

How the Gauchos fare on Saturday night against Cal Poly in the Blue-Green rivalry match will stand as a strong indicator of which road the team intends to take.

First in the Big West with a 6-0 conference record and a sterling 16-2 overall mark, the No. 24 ranked Mustangs will be a major test for UCSB. Cal Poly is returning to the AVCA National Top 25 for the first time since 2008, when the Mustangs were No. 22.

The visitors will enter the Thunderdome as winners of their last 11 consecutive games, including wins over then No. 20 Wichita State and defending Big West champion Hawai’i.

Things are not quite as favorable on the Gaucho side of the equation as UCSB lost its last three matches in addition to having already lost nine of its last 10 sets played.
Santa Barbara will look to bounce back from being swept in four of its last five contests. Even with such results, the season is far from over.

Two wins against UC Riverside and Cal State Fullerton to open up Big West play gave the Gauchos a bit of a cushion to afford to lose their last three games, but they don’t have much left. A loss to Cal Poly would push UCSB underwater, with a difficult path back up to the .500 mark in the conference.

To beat the Mustangs, the Gauchos must focus on at least limiting the attacking power of the high-flying sibling duo of Torrey and Adlee Van Winden.

The Van Windens are Cal Poly’s best outside hitters with a combined 498 kills this season. Torrey’s 278 kills gives her the edge on her younger sister’s 220, but Adlee has an advantage in service aces with five more, 22 to 17.

However, Cal Poly is more than just a sideshow.

Two different attackers, seniors Raeann Greisen and Savannah Niemen, both boast over 100 kills and kill per set ratios of over two. Senior setter Taylor Nelson keeps the Mustang machine in motion with her 12.03 assists per set, which is fourth best in the nation.

“[Cal Poly has] a great setter and a great offense,” UCSB head coach Nicole Welch said. “And we just have to have everybody do their part because they’re going to have some “wow” kills and we have to be okay with that and take care of the ones we can handle.”

The array of attacking options, plus the setting abilities of Nelson, has provided the push behind the Mustangs’ torrid start to the season.

Cal Poly appears motivated to break through after two-straight third-place conference finishes, and the Gauchos now stand squarely in their path.

“Playing Cal Poly is always going to bring out a lot of excitement and aggression from our side,” UCSB head coach Nicole Welch said. “We just want to play clean volleyball, and be better this week than we were last week.”

After managing just one win in 12 non-conference tries, it seemed as though UCSB had found a higher gear when the team won its first two Big West games.

Three-straight road losses – to Cal State Northridge, UC Irvine and Hawai’i – have brought the Gauchos back to Earth, but there’s still time to make noise with 11 conference games remaining.

“When we struggled on that road weekend, for CSUN and Long Beach, our passing kind of broke down,” Welch said. “That’s one of our strengths, so we’ve been working to get that better, and it was much better against Hawai’i and we played a much better match.”

The Gauchos will need standout performances from all their top players in order to avoid being trampled by the Mustang stampede.

Top on the list of standouts is redshirt sophomore outside hitter Lindsey Ruddins. Ruddins’s average of 5.42 kills per set is top in the Big West, and second-best in the nation. Junior setter Annie Hasselmann has set Ruddins up for the majority of those kills, and has a total of 467 assists this season.

Junior defensive specialist Emilia Petrachi has filled her role perfectly as well, piling up a team high 317 digs at a rate of 5.20 per set. That’s the 28th best rate in the nation and the best rate in the Big West.

Beating a juggernaut like Cal Poly, however, requires near-perfect execution from every player that touches the court, not just the traditional torch-bearers.

That’s been lacking from this year’s iteration of Gauchos, but that’s what it will take to stop the skid and breathe new life into the season.

UCSB takes on Cal Poly on Saturday evening at 5 p.m. in the Thunderdome.