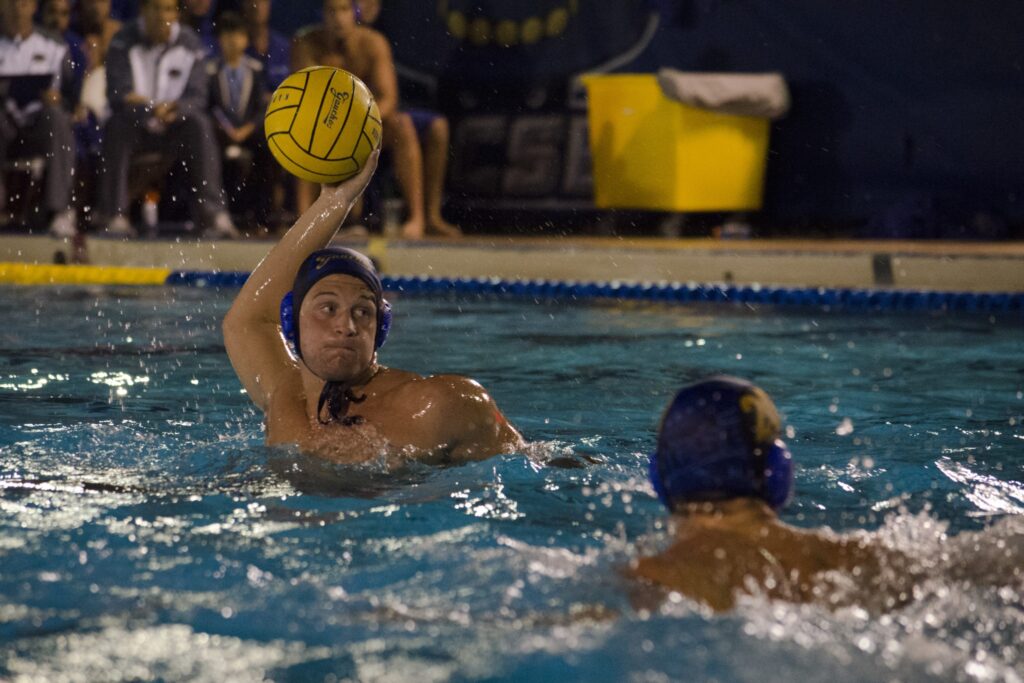 The No. 8 UCSB men’s water polo team will travel north this week to play in its first Golden Coast Conference match of the year against No. 16 San Jose State.
Santa Barbara will continue its journey at PAC-12 powerhouse No. 4 Stanford the next day.

The chance to win both matches could be momentous for the Gauchos, as they will prepare to close out the season with four straight conference matches following its upcoming pair of matches.

UCSB enters its away matches at 9-6. It will take on the San Jose St. Spartans, who own an overall record of 8-7. Santa Barbara will look to upset the 8-3 Stanford Cardinal.

While the Spartans have a young roster featuring only four juniors and one lone senior, it appears they have a rising star in freshman Jacob Mercep. Mercep is definitely San Jose St.’s go-to option on offense, as he has scored 37 goals off of 75 total shot attempts.

The Gauchos are quite familiar with Mercep’s skill, having met in the Mountain Pacific Invitational tournament last month. In that tightly-contested game, which UCSB won 13-12, Mercep scored six goals.

What’s even more impressive is, at one point this season, Mercep had a four-game streak of scoring six goals, one of which took place in the loss to UCSB.

While Mercep gives San Jose St. an offensive force, UCSB has a lesser need to rely on a single player. UCSB’s three-headed arsenal consisting of Ivan Gvozdanovic, Boris Jovanovic, and Shane Hauschild has contributed to over one-third of Santa Barbara’s total goals this season at 62.

An interesting dynamic of Friday’s game in San Jose will be Shane Hauschild competing against his younger brother Ben.

Both brothers went to San Marcos High in Santa Barbara and interestingly enough are leading their respective teams in total steals this season. Shane leads the Gauchos with 17 while Ben holds 21 on the year.

Regardless of the result of their matchup with San Jose State, the Gauchos will undoubtedly be focused and motivated for an even higher-stakes game less than 24 hours later when they play Stanford.

After losing two close games to USC and Cal back-to-back, the Cardinal have bounced back and are now on a two-match win streak as they await UCSB.

Both Hallock and Parrish, playing as drivers, have combined for 53 goals this season, nearly a third of Stanford’s total goals this year.

Although Hallock and Parrish both stand out among the Cardinal in terms of scoring, Stanford’s defense should also draw attention.

Before playing USC and Cal, Stanford had held its opponents to eight or fewer points per game.

Stanford’s goalkeepers have so far earned a GAA (goals against average) of 6.00, while Gaucho goalkeepers have tallied a GAA of 8.89. This means that UCSB has given up almost nine goals per game, while Stanford only allowed six.

Head coach Wolf Wigo will likely be tuning the Gauchos’ defense in preparation to play his old team.

Wigo holds the sixth spot on the Stanford career goals list, which is spearheaded by Bret Bonanni and Tony Azevedo.

Last year, with UCSB ranked No. 7 and Stanford at No. 5, the Gauchos upset the Cardinal 7-6 at Campus Pool for their first win versus Stanford in four years.

The Cardinal likely still bitter and the memory of that game only a year old, Saturday’s matchup will be intense and one for bragging rights.