The Daily Nexus
Music
The Flaming Lips and Mac Demarco Ignite SB Bowl
October 12, 2017 at 11:45 am by Zoe Jones 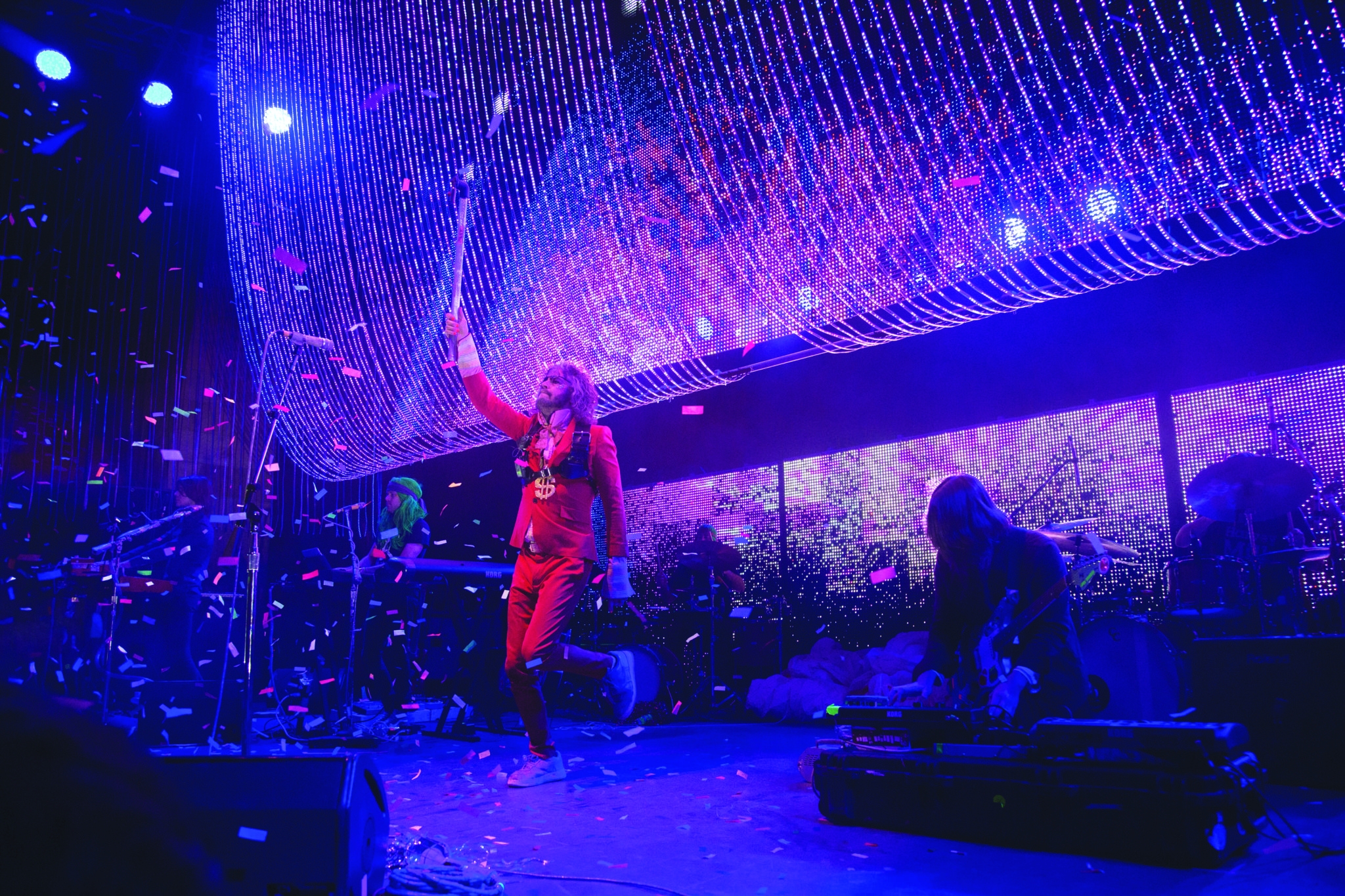 I have a confession to make: After two-plus years of covering shows for Artsweek, last Friday was my first time at the Santa Barbara Bowl. Now, don’t get me wrong, there have been plenty of interesting, noteworthy shows that have happened there during that time, but something always happens to go wrong as I’m planning to make my way there. This time around, though, going to the Bowl was a must. Two acts from my high school iTunes days were making a stop at the Bowl on a joint headlining tour: The Flaming Lips and Mac Demarco.

While standing in line to receive my ticket, I already heard the opening lines to Mac’s now-classic “Salad Days.” His signature warbly guitar tones floated down to the bottom of the Bowl, and I grew more and more anxious to get to the top. As I walked up the steep slope, he was already churning through “Cooking Up Something Good,” a chilled-out set list staple that tells the story of a family who cooks methamphetamines in their home (yes, really). Blue and purple lights reminiscent of the ’80s reflected from the rotating disco ball that hung from the rafters of the stage, and shined onto every face in the audience — a display of the simple and slightly corny delight that is a Mac Demarco show. I had already seen him live twice before that night, but never in a true concert setting, only on large music festival stages. Hundreds of blonde and brown heads bobbed along to his music, making for a much more comfortable experience for the singer. With a beer in one hand, microphone in the other and a smile plastered across his face, he truly looked like he was having a good time.

The gap-toothed guitarist, matching with at least half of the audience, wore his standard uniform of a baseball cap, too-large trousers and an old t-shirt. Halfway through the set, he and his band began to churn through “Freaking Out the Neighborhood,” a slightly anxious, but very danceable tune about a slacker son. In many ways, this song embodies the Mac Demarco ethos: music with a lackadaisical attitude and hiding something simply brilliant. He skillfully and meticulously crafts the guitar riffs in all of his songs, and his smooth voice is able to soar high above them despite his notorious onstage cigarette habit. Although his antics are predictable — such as jumping from sound equipment and kissing bandmates — it is unfair to characterize him as untalented. His work ethic is impeccable, and his talent is obvious.

Despite his talent, I noticed some of the older audience members seemed less engaged with Demarco’s performance than the rest of the crowd. At first glance, a show billed with him and The Flaming Lips as headliners doesn’t make much sense. However, when you consider the sheer weirdness of both, it’s clear why they’d be a perfect fit. Toward the end of his set, Demarco mentioned that this was one of the last shows that he’d be playing with the Lips, and opening act The Garden. He thanked them both graciously and closed out his set with “Still Together,” a long-time, end-of-show tradition.

The intermission between acts was relatively short and was used to set up The Flaming Lips’ extravagant stage effects. From my vantage point, I could see large, colorful balloons waiting to be dropped down onto the audience, which explained the sign in the front of the venue encouraging patrons with latex allergies to make staff aware. Soon after the setup was complete, the Lips came onto the stage with a burst of color. Within five minutes of making their entrance, smoke, confetti and a flash of multicolored lights had already been put into gear. Wayne Coyne, the group’s frontman and leader, greeted the crowd with a shout, outfitted in a slim crimson colored suit, completing an appropriate entrance for a band oft-described as eccentric.

As the band presented a balloon that read “Fuck Yeah Santa Barbara” in big silver letters, they knew that the crowd was anticipating hearing their favorite songs. The Lips then launched into the fan favorite “Yoshimi Battles the Pink Robots Part 1.” The titular Yoshimi serves as a sort of mascot for the band in her fight against the pink robots serving as a symbol for whatever the listeners may desire. The Flaming Lips have been active since the early ’80s, which means that its members are all nearing their sixties. Despite their graying hair and increasing age, however, they still approach shows with the same bright energy that they became famous for. 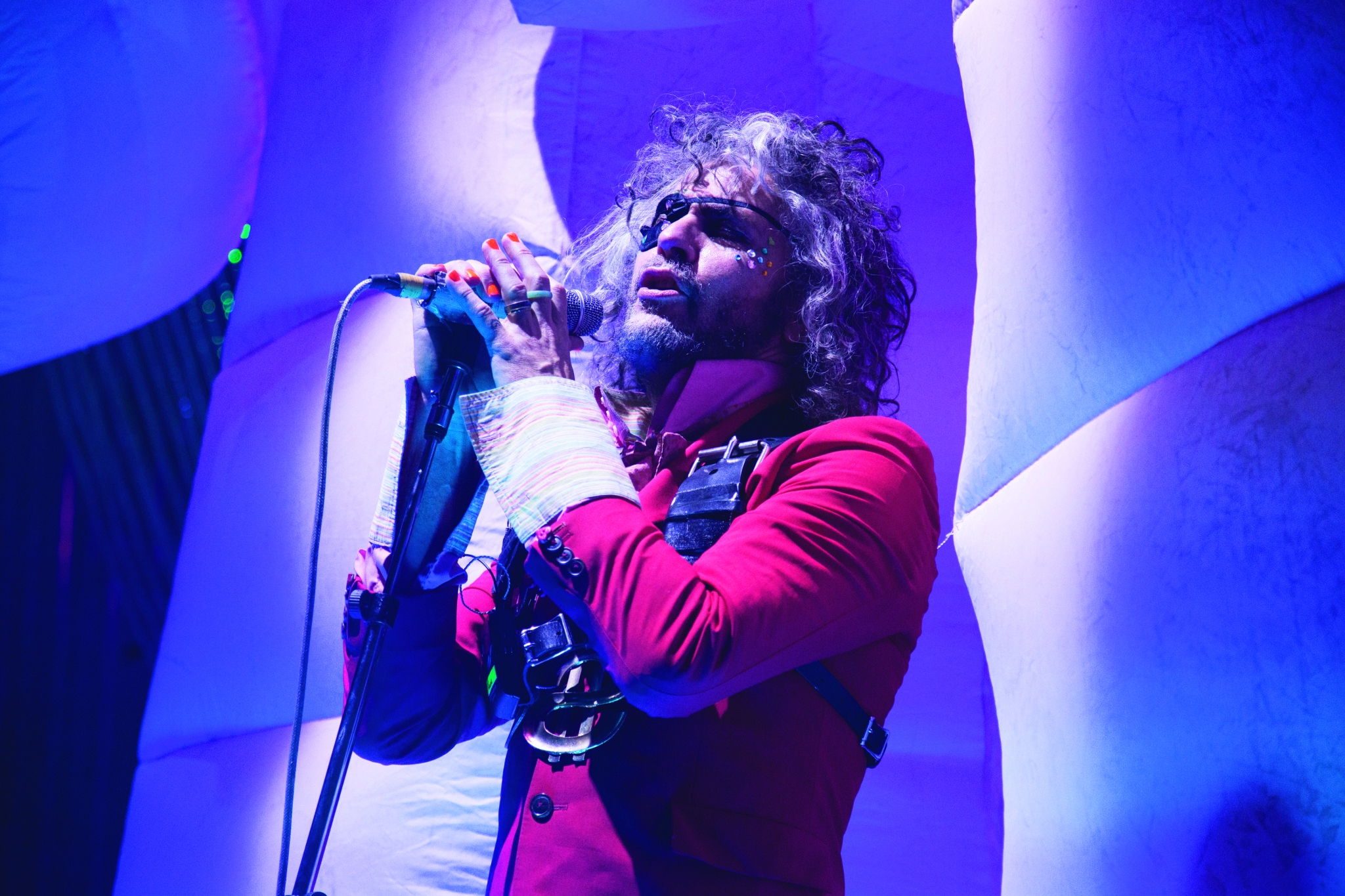 Throughout the course of the show, Coyne paid homage to the unconventional artists that have influenced himself and his band of misfits the most. He traveled across the crowd in a plastic, transparent bubble, a nod to the funk group Parliament Funkadelic, and performed a sonically faithful cover of “Space Oddity,” a tribute to the late, great David Bowie. The band closed their set with “Do You Realize??,” a sweet ballad which has been dubbed by Coyne as the best song they’ve ever written.

The Flaming Lips and Mac Demarco put on a weird, wonderful show — one that lit up the Santa Barbara Bowl with bright lights, beautiful colors and smiles alike.