The Daily Nexus
The Daily Stench
USMNT Failure To Have Far Reaching Implications on Me Specifically
October 11, 2017 at 4:20 am by Jenny De La Cuadra 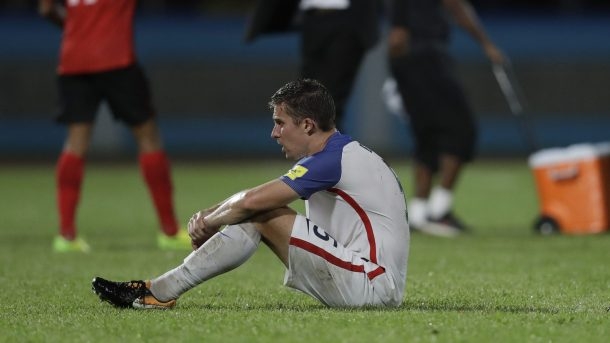 Last night the US Men’s soccer team lost 2-1 to Trinidad and Tobago, meaning they will miss out on participating in the 2018 World Cup.

“But, Jenny,” you say. “Isn’t Trinidad and Tobago, like, ranked 99th in the world or something? Doesn’t the U.S. have basically 251.6 times the people to choose from when picking a team?”

Yes. You are correct — oddly specific but definitely correct. Also, I don’t wanna talk about it.

While Bruce Arena and Co. may try to pass this off as a preemptive abstention from the Russian hosted event, it’s nothing more and nothing less than an utter failure and an embarrassment which may well prove to undermine all the great progress U.S. soccer has fought hard for over the past two decades.

Heads will and must roll throughout the ranks of the national program, but this is really my sob story.

Heads will and must roll throughout the ranks of the national program, but this is really my sob story.

I’m a senior; I’m set to graduate this year. Summer ’18 was going to be the last relatively carefree time in my young adult life.

Putting off any real responsibility, I had planned to move home and spend the summer watching the national team take on all comers before flaming out in the Round of 16.

What the fuck am I supposed to do now? Actually try and get a full time job? That’s absurd.

A pox on you, Men’s national team. Your abject failure is forcing me to grow up too soon.

Jenny de la Cuadra is a fourth-year communication major WHO APPARENTLY SHOULD GO AND LOOK FOR A FREAKING JOB NOW. Thanks, Sunil Gulati.