The Daily Nexus
Sports
Gauchos Look to Extend Winning Streak Away at UC Davis
October 10, 2017 at 5:00 am by Richard Benites 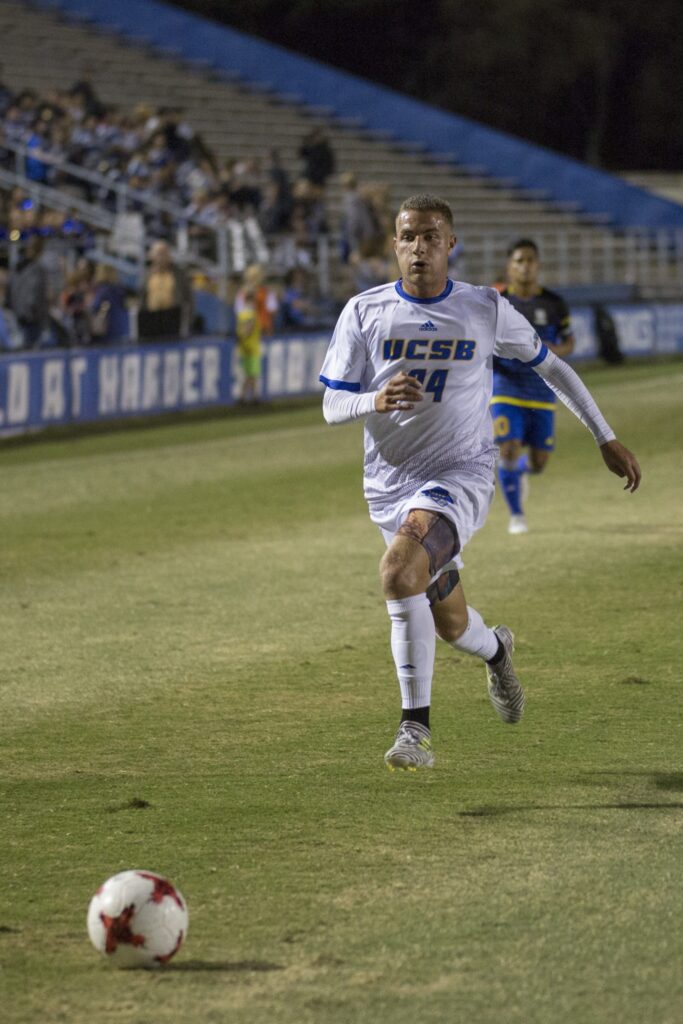 While making a break for the goal, Kaya Fabbretti races down the field. Dustin Harris/Daily Nexus

Considering that the UCSB men’s soccer team’s closest performance so far this season came last Saturday in a double overtime thriller against UC Irvine, it means the Gauchos have been continuing their fine form even on the road.

This Wednesday, away at Irvine, will be Santa Barbara’s third and final matchup of their midseason road series. While currently 1-0-1 during away games, UCSB are also undefeated on the season at a 3-0-1 record. They’ll try to keep their winning ways afloat however, as they face off against a 2-1-1 UC Davis side who currently hold the third place position on the Big West league standings.

Nonetheless, even with the Gauchos’ impressive start, a win for UC Davis will be enough to hoist them up to the first place spot. So UCSB will be in fully competitive spirits in order to assert their conference domination even more. Expect another low scoring affair due to the Aggies lack of offense and the Gauchos on the road productivity, but quite a heated game as each side of the pitch would like to find the back of the net early on.

Looking back on last Saturday’s game, a lot can be taken away from the defensive end. Specifically so, straight from the goalkeeper himself: UCSB freshman Alan Carillo. Carillo, who currently averages only a single goal allowed per game, has recently been awarded his 2nd honor as the Big West Defensive Player of the Week. With a clean sheet already on record, and coming off an outstanding 8 save game versus Irvine, he is truly on fire and it’s helping pave the way for UCSB’s continued success.

As for the Gauchos attacking third of the pitch, a clear cut MVP for the early part of the season can be found in freshman forward Rodney Michael. With already the most goals for the team (5) and the most assists as well (4), Michael has seemingly found himself to be a part of the match highlights week in and week out.

A recurring trend can be spotted here considering underclassmen play has been very vital for UCSB thus far. Altogether combined, Gaucho underclassmen have notched a grand total of 14 goals and 11 assists on the year. So it’s clear to see that the men’s soccer program’s future is bright and head coach Tim Vom Steeg has done his due diligence during the offseason scouting.

When analyzing UC Davis’ current team performance, praise can be given to them on the final third of the pitch. However, not much offensive productivity has been observed so far. With only 5 goals over their first 4 conference games, it can be argued that the Aggies have yet to click; it’s unlikely they’ll finally get things going come Wednesday night when they face off against an ever stout UCSB backline. UC Davis are led by junior forward Matt Baringer and senior midfielder Miguel Acevedo, whom both have 3 goals on the year and 2 assists apiece.

The Aggies last game definitely didn’t go their way as they fell 2-0 to UC Riverside. In perspective, UC Riverside is dead last in Big West conference standings and the Gauchos bested them a couple weeks ago at home by a score of 3-1.

UCSB enters this week’s matchup as the slight favorite, but this game can still go either way. The Gauchos also lead in their all time record against the Aggies by a score of 22-8-5.

The Gauchos will visit UC Davis this Wednesday, October 11 at 4 p.m. They will also host Cal Poly for the Blue-Green rivalry this Saturday, Oct. 14 at 7 p.m.