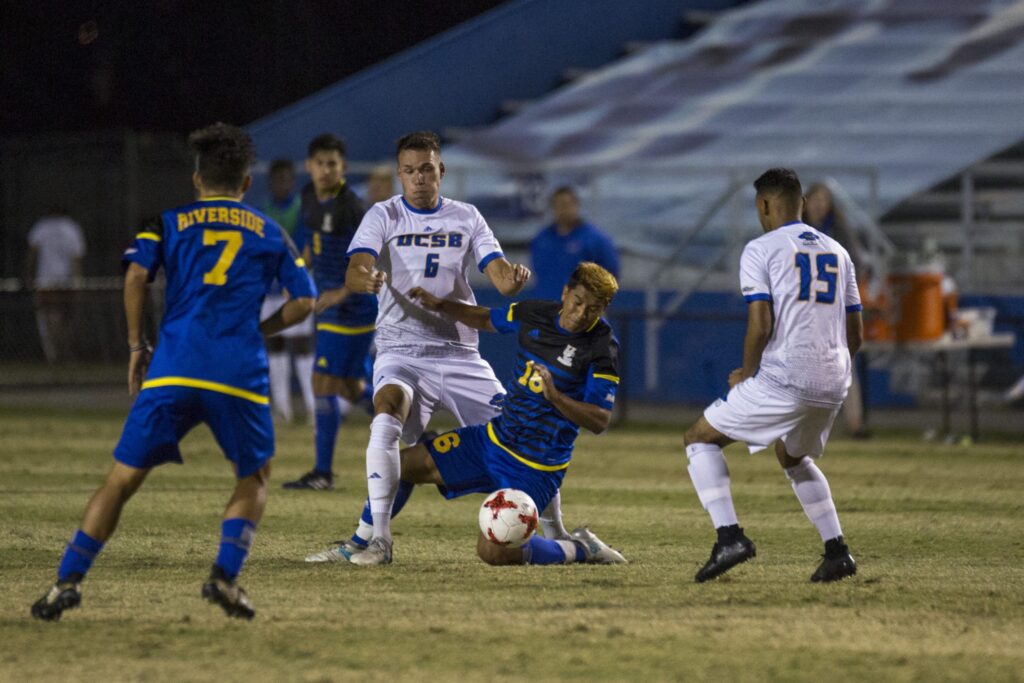 Jan Ilskens and Giovanny Acosta surround their opponent to get the ball back. Dustin Harris/Daily Nexus

The UCSB men’s soccer team began its first all-conference road trip following an exciting win at home against UC Riverside which saw the team climb to 4-4-2 and 2-0 in non-conference and conference play respectively.

The Gauchos had a four-game winning streak headed into the road trip and UCSB was looking to keep the streak alive against the California State University, Northridge Matadors Thursday night.

The Matadors found themselves on a streak of their own, unfortunately for the team, it was four games without a win headed into their Thursday match where CSUN was looking for some new spirit in their first home conference match.

The match got off to a steady pace as both sides were trying to feel out their offense looking to establish a rhythm. However, neither side could break through as by the end of the half neither side had managed to put any offensive pressure on the other. At halftime, both teams had one shot, zero saves, and only one corner kick from UCSB.

The teams were able to find their rhythm in the second half of the match with each side getting five shots off. UCSB was able to get four corner kicks as part of their efforts in making junior CSUN goalkeeper Henrik Regitnig work in the second half, forcing him to make four saves. Despite the chances on offense to score, UCSB could not put the ball in the net and the match ended at a regulation time in a draw bringing on overtime.

That opportunity came in the second half of overtime in the 106th minute, where Gaucho freshman Rodney Michael got through two Matador defenders and played the ball to sophomore Noah Billingsley, who was able to put the ball past the CSUN keeper Regitnig from the right side of the box.

The shot was good for the golden goal earning the Gauchos the win, 1-0 in 2OT, increasing their win streak to five. The UCSB defense also continued their shutout streak at the end of this game, bringing their total shutouts for the season to five. The Gauchos ended Thursday night with an overall record of 5-4-2, and 3-0 in conference play.

The Gauchos then went south to play the University of California, Irvine Anteaters, at Anteater Stadium, Saturday night. Headed into the match, UCI had an overall record of 6-4-2 and 1-1-1 conference record.

The second North-South division matchup of the trip began with an explosion of offense from both sides. Neither side was able to put a point on the board until the 28th minute where senior Anteater Giovanni Godoy drew a foul in the penalty box bringing senior teammate Mario Ortiz to the penalty spot.

Ortiz was able to put the ball past UCSB keeper Alan Carrillo, giving the senior his third goal of the season. The offense from both sides continued as 18 shots were taken between the two teams by the end of the first half, but surprisingly it was only Ortiz’s shot which was on the board, giving UCI the lead at 1-0.

UCI found themselves in their own end as UCSB was able to take possession and create some chances for good shots on goal. The Anteater defense was forced to try to stop the Gauchos as they took their own turn on the offensive end in a second half that would see nine shots taken by the away team.

UCI was able to take six shots of their own in the second half and did have an opportunity to increase their lead, but Gaucho keeper Carrillo kept them out of the net earning four saves.

It was in the 83rd minute where UCSB would finally get the finishing chance they needed to execute on when junior forward Jonah Adomakoh played the ball along the right wing to freshman standout Rodney Michael who sent the shot into the net for his fifth goal of the season.

The match would slowly wind down, ending in regulation at 1-1, and the Gauchos would find themselves in another OT period.

The first OT period found the Anteaters with yet another helping of steady offensive play. Their closest chance came in the 95th minute on a header that went off the far post and was unable to be put away by any Anteater.

Santa Barbara’s defense was able to hold steady throughout both overtime periods, not allowing a successful offensive outburst in the first and keeping the Anteater offense quiet in the second.

The Gaucho offense found nothing in the OT periods and could not put ahead a second golden goal after staving off a valiant UCI offense. The match would be played to a draw at 1-1 at the end of 2OT.

The Gauchos played well this week in their first instances of conference road play. Earning the exciting win against CSUN and getting a draw against UC Irvine are good signs for a heavily-favored squad which is looking to get ahead early.

The next match for the Gauchos will be played at Aggie Stadium as UCSB will be taking on the UC Davis Aggies on Wednesday, October 11.

The next home game for the Gauchos is a surely anticipated match in the 2017 men’s soccer installment of the Blue-Green Rivalry against the Cal Poly Mustangs, which will be played at 7 PM PST on Saturday, October 14th at Harder Stadium.