It’s been nothing but smiles last week from both the UCSB men’s soccer team and fans alike as the Gauchos ended week one of Big West play undefeated for the sixth-straight year. This week, they’ll attempt to sustain their recent four-match win streak against reigning Big West champion Cal State Northridge. 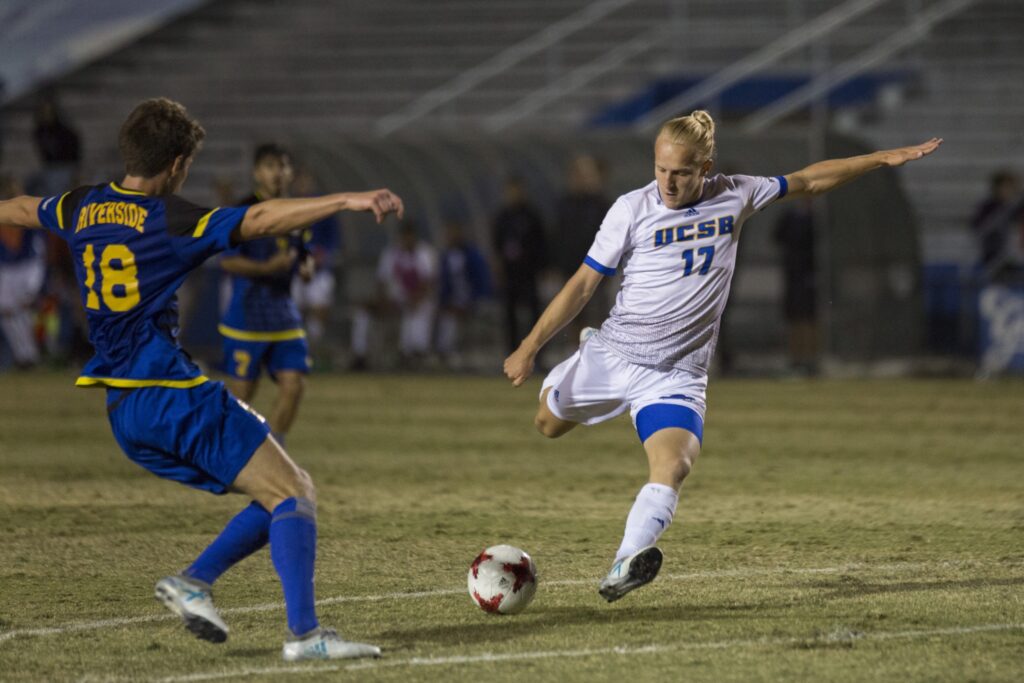 No longer does UCSB sit below the .500 mark as it will go into its first Big West road match at 4-4-2, 2-0. Santa Barbara will look to avoid being defeated by a Northridge team that has struggled as of late, going 0-3-1 in its last four matches, which included a three-match losing slump, and owning a 5-5-1 record.

The Gauchos were tagged as the preseason favorite to win the Big West North Division for a fifth-consecutive time entering this season and seem to be en route to doing so as a result of their improved goal scoring. During its undefeated stretch, UCSB has outscored its opponents 10-3.

Meanwhile, the Matadors will be trying to find their offense sooner rather than later considering they only scored one goal in the conference opening weekend.

Altogether, both ends of the pitch will be meticulously planning for Thursday’s game as UCSB won’t wish to relinquish their top spot in the North Division standings and Northridge will seek its first conference win.

The recent season can attest to the fact that UCSB becomes a different team for the better when conference play begins. After losing its conference opener in the 2016-17 season, UCSB went on to win six of its eight next matches (6-0-2) before its next loss. In 2015-16, the Gauchos won their first four Big West matchups.

Over its two conference matchups, UCSB has already netted a total of eight goals on the season.

Compared to the eight goals they scored throughout their entire 10-match non-conference schedule, the progress of this young roster is very much visible.

With a current total of seven different goal scorers, the team is now led by two different players in this statistic category. Sophomore forward Ignacio Tellechea originally came onto the scene as the team’s leading goal scorer during the non-conference portion of the year. He also notched in another goal during the conference home opener against Fullerton via a beautifully curled shot from around the corner spot.

Next up is freshman forward Rodney Michael, who has now scored a goal in each Big West match thus far. It was announced Monday that Michael was selected as the Big West Offensive Player of the Week. Both Tellechea and

Michael currently sit at the top of the team’s scoring stats with four goals apiece, and will look to improve upon that tally come game night against CSUN.

As for the Matadors, the beginning stages of the Big West season have not been very kind as they had to start off with two games on the road to finish five straight road matches. Still, Northridge is 2-1 on the year at home and will expect to turn things around once UCSB comes to town.

A likely candidate to resolve CSUN’s goal scoring drought would be senior forward Emmanuel Usen Jr., who has totaled five goals for his side on the year. Also adding two assists to his name, Usen will surely be the beneficiary of most Matador targets and key to Head Coach Terry Davila’s game plan.

Speaking of head coaches, much respect can be awarded to UCSB’s Tim Vom Steeg for getting his team ready in time for the conference regular season. The Gauchos are currently the only Big West team without a conference loss. Consistency will be key from here on out, and all signs point upwards for the Gauchos’ yearlong campaign and postseason aspirations.

UCSB will be on the road this Thursday night, Oct. 5, to face Cal State Northridge at 7 p.m. at the Matador Soccer Field.