The Daily Nexus
Sports
Gauchos Remain Winless in Conference Play Following 1-1 Draw Against CSUN
October 5, 2017 at 11:14 am by Omar Hernandez 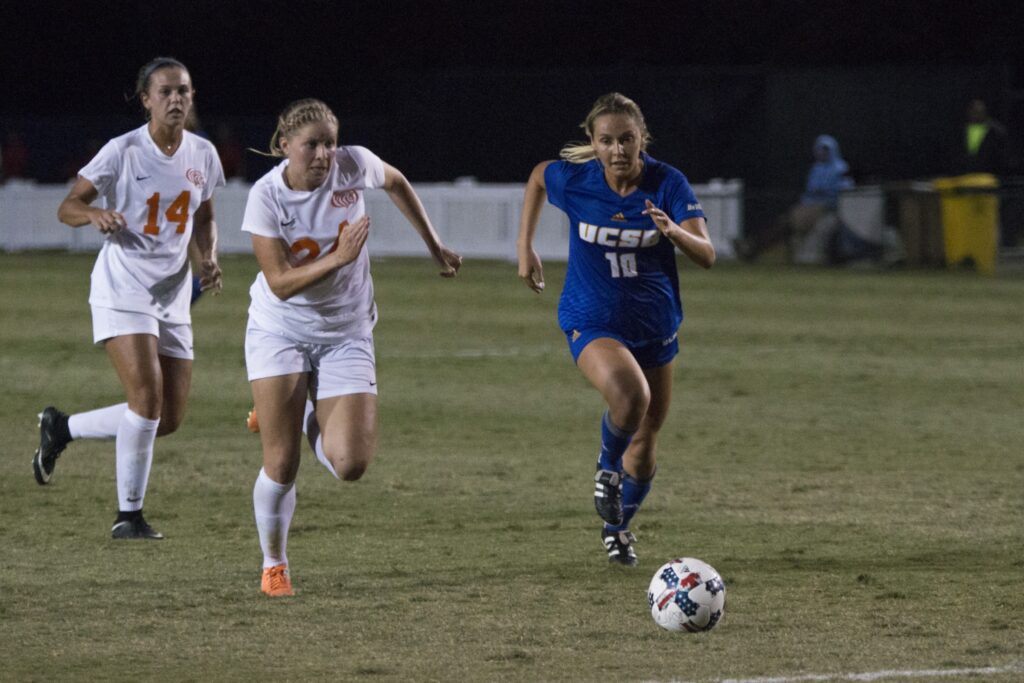 UCSB was able to hold on for a tie in a tough away game at Northridge on thursday. This game gave the Gauchos their first point of the conference season and bumped them up two places in the Big West to their current seventh place standing. CSU Northridge fell to sixth place in the standings as a result of the tie and are still looking for their first conference win.

The Gauchos came out with a much more offensively aggressive mindset than in their last two losses, and it paid off with a goal by freshman Christine Maurer in the 14th minute. She knocked in a perfect corner kick by midfielder Chace Schornstein to the near post, and with that they had their first lead in two games. Maurer has been on a tear for the Gauchos recently, having scored three goals in the last three games leading up to this one, and this goal put her at five for the season. That sort of offensive output from the midfield is rare, and her continued improvement has been one of the biggest positives for the team this year.

The rest of the first half was mostly back and forth, however the Gauchos were able to continue to attack and get three shots on goal the remainder of the period, two of those courtesy of Maurer.

The second half belonged to Northridge however, as a complete shift of momentum ensued when the teams came out of the locker room. CSUN got five shots off in the first 15 minutes of play, and they eventually broke through with a goal in the 60’ minute. It was another goal by a freshman, however this time it was the Matadors’ Amy Aquino who netted it after her teammate Cynthia Sanchez beat the Gauchos goalie in a one on one situation in the box.

CSUN continued to apply pressure on UCSB just how the Gauchos were able to do to them in the first half after their goal, yet they couldn’t create any goals off their four scoring opportunities which led the game to overtime.

In a repeat of the beginning of the game, the Gauchos worked to impose themselves on the Matadors defense during the first overtime period. Shots by both Colby Parker and Madeline Gibson didn’t find their marks however, leading to a second period of overtime.

Both teams had their share of opportunities in double overtime, yet UCSB almost came out with the victory in the final minute of play when junior midfielder Mallory Hromatko’s shot was saved by the goalie Jovani Mccaskill. The game ended in a tie, a result that the Gauchos can certainly live with.

Looking forward to UCSB’s next matchup against Hawaii, the Gauchos have a chance to make an even higher ascent up the rankings. Although they’ve lost two games already, fouth place is only one victory away and it’s up to UCSB to beat the second to last place team in the conference to get there.