While any household views fruit flies as an annoying pest, their behavior when searching for food has piqued the interest of UC Santa Barbara scientists.

In order to develop into a fruit fly, the drosophila melanogaster larva must gain an enormous amount of weight very quickly. Often, their motivation to find a food source comes with potential risks.

To fully understand the larvae decision-making process, UCSB researchers and colleagues from the Center for Genomic Regulation (CRG) in Barcelona with the help of the Catalan Institute of Nanoscience and Nanotechnology are using this organism to study brain function and behavior control.

The researchers at Catalan built a vivarium based on microfluidics with which they were able to observe fruit fly larvae behavior. The vivarium contained agarose, a hydrogel similar to the natural habitat of the larvae that consists of soft semi-liquid structures.

The hydrogel used for the experiment can be adjusted to replicate different conditions, such as soft or hard. The larvae were introduced at the surface of the gel, and when the condition was not too hard, they dug. This behavior helps them avoid predators like wasps and sunlight, which can dehydrate them.

However, since larvae are air-breathing animals that cannot oxygenate underwater, diving in hydrogels poses a physiological challenge. Larvae that failed to return to the surface after a few minutes stopped moving, and the majority of them drowned.

“Larvae have relatively simple brains compared to vertebrates, which make them good candidates for study,” Matthieu Louis, an assistant professor in UCSB’s Department of Molecular, Cellular, and Developmental Biology and corresponding author, said. “We wanted to explore the capabilities of these larvae in naturalistic conditions. We know they have a tendency to move toward food when there’s an attractive odor, so we designed the vivarium to mimic the conditions of decaying fruit, larvae’s favorite meal.”

The researchers examined how the dives are conditioned by physiological and sensory signals. They first analyzed the effect of hypoxia on diving behavior. By partially blocking the respiratory tracks of larvae, they found evidence that the level of oxygenation determines the tendency of larvae to dive. This result suggests that diving is regulated by a cost-benefit balance, which combined internal physiological signals, such as oxygenation levels and possibly hunger, with external cues, like the presence of food odor.

They then studied the effect of the hardness of the hydrogel on the control of diving behavior. They asked whether the detection of an attractive odor was sufficient to influence food-search behavior and, more specifically, to promote diving.

The results demonstrated that larvae perceive and respond to liquid-borne odorant molecules. In line with the idea that diving relies on a cost-benefit balance adjusted by sensory signals, they found that the duration of the dives increased upon detection of an attractive odor. 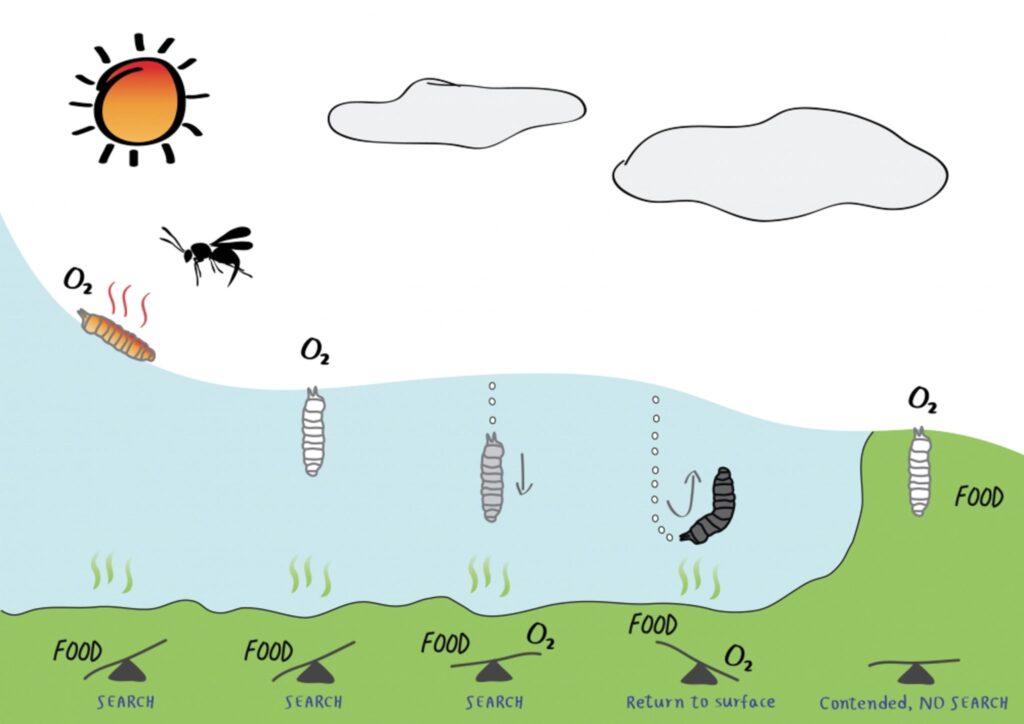 The drawing above depicts the food searching process larvae go through. In their habitat, larvae will risk drowning in order to escape heat from the sun or predators, such as wasps. They will also risk their lives in the hopes of finding food. However, if they go too long without air, they will drown. / Courtesy of Daeyeon Kim

“If the hydrogel contains no food but we add a food cue at the bottom of the chamber, the larvae dive deeper and more frequently,” lead author Daeyeon Kim said. “In fact, they can go deeper for quite a long time before returning to the surface to breathe. However, this diving behavior is suppressed when the agarose contains food. Then they just stay at the surface and keep eating the substrate.”

Kim conducted this research at the CRG and is now a postdoctoral fellow at UCSB.

Additionally, they compared the dig-and-dive behavior of D. melanogaster with a second species of the Drosophila group, the fruit pest D. suzukii. Consistent with the innate preference of D. suzukii for fresh fruits, larvae of this species were capable of digging into harder substrates than D. melanogaster. This indicated that D. suzukii is also more resistant to hypoxia.

Using the dig-and-dive method, they examined whether aversive odors could be used as a means to deter larvae from digging and diving into fruits.

The researchers tested the effect of geosmin, an odorant volatile associated with the presence of toxic compounds in overripe fruits. In both D. melanogaster and D. suzukii, geosmin increased its surfacing time. In the case of D. suzukii, this trend co-occurred with a significant reduction in diving and active attempts to escape the vivarium.

For D. suzukii, they additionally tested the effect of the common insect repellent DEET and found that it elicited significant reduction in diving and that it promoted escapes out of the vivarium as well.

Together, these observations highlighted the potential of pest control strategies in which the use of non-toxic chemicals could refrain D. suzukii larvae from digging and diving, which in turn would slow down feeding and development and increase exposure to parasitoid wasps at the surface of fruits. These strategies could complement existing efforts to lure adult flies into traps filled with attractive volatile chemicals.

Furthermore, the dig-and-dive method appears well-suited to identify and to characterize the effects of pheromones involved in aggregation behavior. The researchers believe that this knowledge might guide future efforts to devise methods to interfere with the ability of larvae to aggregate and to destroy crops by feeding through their dig-and-dive behavior.