The Daily Nexus
Sports
Fresh Start for Gauchos as They Open Big West Play Hosting UCR
September 28, 2017 at 5:05 am by Omar Hernandez 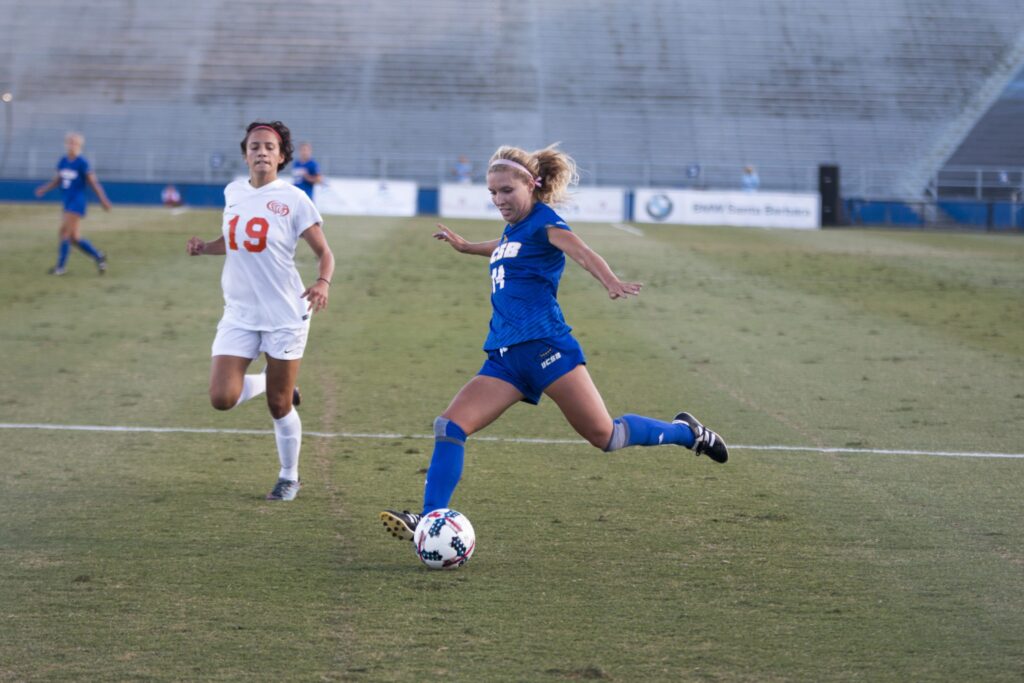 Amanda Ball passes to a teammate near the goal. Stephen Manga/Daily Nexus

Coming off of a revitalizing 4-0 victory over Denver, the UCSB women’s soccer team is now looking ahead to its first Big West matchup of the year against UC Riverside.

The Highlanders came into Friday’s match with a 3-7-2 record, while UCSB came in sporting a 4-4-3 record and looking to get over .500 for the first time since Sept. 10.

The Gauchos had a decent showing in their non-conference games to start the season, but they ended on a strong note with a hard-fought loss to Pepperdine, 1-0, and the aforementioned win against Denver. Though UC Riverside ended the first part of their season with a victory, they still sit in eighth place, just below UCSB in conference standings.

While it is still early in the season, this could end up being a pivotal matchup for both teams, as both need to accumulate as many wins as they can against themselves and other low-ranking teams as possible.

One of the keys to the Gauchos’ success is going to be carrying over the offensive flow they showed in their last game. In order to maintain that level, they will have to continue to keep diversifying their attack, which is something they did a great job of in Denver, where seven players had double-digit shot numbers.

Going up against UC Riverside will be a great opportunity for UCSB to refine its offensive skills, seeing as the Highlanders’ defense has been known to be weak at times. UCR has given up twice as many goals on almost the same amount of shots compared to their opponents while shooting at a much lower percentage on average. If the Gauchos are able to replicate at least some of their performance from last game they should be able to score early and often.

Alternatively, UCSB will be looking to continue the stalwart defensive effort that has led to four shutouts so far this year. Again, this matchup should be less of a challenge and more of a chance to improve for the home squad as they have only surrendered more than two goals once this season. Senior defender Kate Shoemaker’s plays have been useful in maintaining the integrity of the defense, and her experience and leadership make for a much more efficient team.

The Gauchos should prepare to strike first and keep the energy up, which, this year, has not been easy. UCSB actually has a better record on the road than at home so far, but building up and feeding off the home crowd will be an essential component for the team heading into the later stages of the year.

UC Riverside has been abysmal on the road this year, coming into the game with a 1-4-1 record when they are away, so the Gauchos have to be able to capitalize on home field advantage.

According to the stats, UCSB should be able to win against UCR, as they are a lower-ranked opponent. However, it is crucial that the Gauchos not underestimate UCR.

Early season wins might seem irrelevant as the Big West tournament is months away, but starting off strong and focusing on self-improvement is essential to keeping UCSB on a path to success.

Kick-off between the Gauchos and the Highlanders is at 7 p.m. on Friday, Sept. 29, at Harder Stadium.