The Daily Nexus
Sign of the Times
Sheriff Brown Has Been Waiting for a President Like Trump
September 26, 2017 at 8:17 pm by Kathy Swift 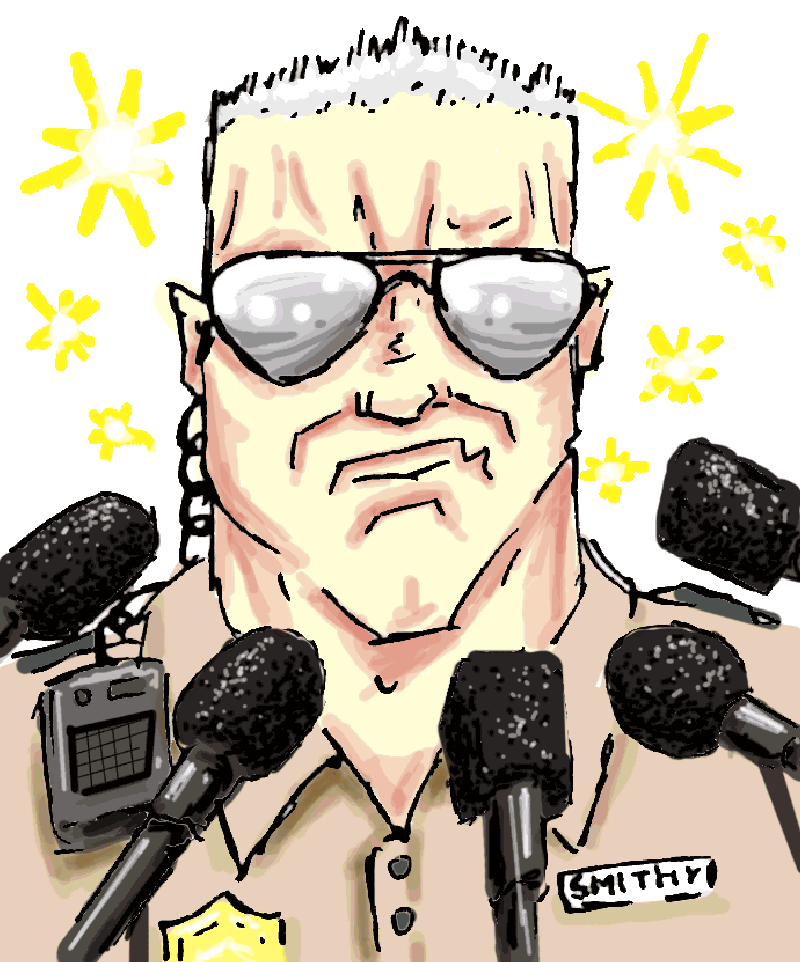 The Trump administration’s discriminatory citizenship policies have served to fuel white nationalism across the United States.

From California to Virginia, white supremacists have terrorized communities as Americans have watched in dismay.  The most recent attack occurred at the University of Virginia in Charlottesville when hundreds of Klansmen and Neo-Nazis chanting, “Jew will not replace us,” and  “White lives matter,” beat up a small group of student activists ahead of a planned Unite the Right rally.

The torch-wielding white nationalists attacked students en route to St. Paul’s Memorial Church where civil rights leaders Cornel West and Traci Blackmon were addressing an interfaith community of Black Lives Matter activists.  In an interview for “Democracy Now!,” West remarked on the notable lack of police protection for students and clergy that evening.

Many journalists reported heavily armed white nationalists attacking counter-demonstrators while police stood looking on.  When a Jewish synagogue was menaced by Neo-Nazis, it was similarly denied police protection.  Black Lives Matter activist De’Andre Harris was beaten unconscious by white supremacists around the corner from the Charlottesville police station.

It’s hard to argue that such policies have made our country any safer.

The violence culminated with the murder of Heather Heyer, a labor organizer killed when a car driven by a white supremacist from Vanguard America smashed into protesters of the Unite the Right rally.

Largely in response to the protests of anti-DAPL and Black Lives Matter activists, conservative politicos in several states have proposed laws to protect drivers who run down protesters.   These laws have received backing by police unions in Texas and Florida.

It would seem that police public relations are dipping to a nadir.

Last month, when Donald Trump made a speech to the Long Island police department, he encouraged officers to mishandle alleged Latino gang members amid laughter and applause.

In the troubled months since Trump assumed presidency, the country has been thrown into turmoil as his administration seeks to effectively redefine U.S. citizenship.  His call for a Muslim ban against people of the Islamic faith, along with accelerated deportation raids for undocumented workers discriminate against already vulnerable populations.

It’s hard to argue that such policies have made our country any safer.

More recently, Trump has said he will cut immigration in half by restricting future immigrants to those of English speaking ability, a measure that flies in the face of the linguistic diversity that is America’s lived historical experience.  Needless to say, Trump’s efforts to demarcate U.S. citizenship along religious and ethnic lines have stoked the flames of xenophobic white nationalism.

As a result, state, county and municipal authorities have struggled to maintain cohesion in the face of the Trump administration’s dangerous instability.  Shortly after he became president, municipalities across the nation declared themselves sanctuary cities in response to his orders for accelerated I.C.E. raids on undocumented immigrants.

Here in California, Senate Bill 54, also known as the California Sanctuary State Bill, seeks to countermand some of the broad powers of federal authorities and return a modicum of sanity to our state’s immigration policies.

As such, it prevents state law enforcement agencies from divulging the immigration status of the incarcerated to I.C.E. agents.  It also protects immigrants’ identities in public schools, medical clinics and courthouses.

However, many police departments have opposed SB-54 over concerns about the threatened loss of federal funding from the Trump administration.

One of them is Sheriff Bill Brown.  As president of the California State Sheriffs’ Association, Brown is strongly opposed to California’s sanctuary state law.  He claims that “this bill, in its current form, provides sanctuary for criminals.”  He stresses that SB-54 will “shield criminals and put hardworking people in harm’s way.”

It seems that Brown is often on the wrong side of public opinion.

A few years ago, he similarly opposed Proposition 47, a measure to reduce prison overcrowding by freeing people held for low-level crimes and nonviolent drug offenses.  Most were imprisoned simply because they could not afford to post bail.

Despite Brown’s stance against Proposition 47, it passed with overwhelming support from the people of California.

Prior to that, Brown used the same tactic in order to push for the construction of a new jail even as cost overruns and community opposition ran high against it.

More recently, he has conflated immigrant status with criminality in order to divert attention from the numbers arrested for nonviolent drug and alcohol use.  Though he alleges the legislation will grant “criminals sanctuary,” SB-54 attempts to redress some of the excesses of the failed drug war by preventing the automatic deportation of immigrants arrested for substance abuse problems.

It seems that Brown is often on the wrong side of public opinion.

In generalizing immigrants with criminality, he employs the kind of reductionist thinking that is in keeping with Trump’s own bellicose bigotry.  Stereotyping Americans according to their race, class, gender, sexual orientation, physical ability or religion dehumanizes the people so-labeled and needlessly divides our communities.

Unfortunately, as recent events in Virginia and Long Island reveal, it seems that many in law enforcement would appear to be falling in line with Trump’s brand of irresponsible racist rhetoric.  Motivated by fear, hate and ignorance, such reductive reasoning imposes simplistic categories of otherness on a pluralistic people and further inflames white supremacist sentiments.

But Sheriff Brown holds public office that requires him to be responsible to his diverse constituency.  With his re-election looming, he should remember his oath of office and respect Santa Barbara’s inherent multiculturalism.  Support for California’s State Sanctuary law is a step toward alleviating some of the dangerous divisiveness espoused by the Trump administration.

Kathy Swift wants readers to pay attention to whether their elected officials are really representing their best interests.

Lies, half-truths and innuendo do not a reasoned argument make Kathy. 60 million plus Americans voted for Trump and he won the Electoral College and the Presidency. You don’t like the policies he ran on and as President, is implementing. OK. Plenty of us prefer him and his approach to policy and governance to the alternative. The country is not in a turmoil, only certain elements of the political party that lost the election (including those demonstrators funded by Soros and others). Having lived through the 1960’s I know what national political turmoil is, and what is happening now is… Read more »

You are missing the word “illegal” in front of “immigrants.” People with valid, legal immigration status (e.g. green card holders) are not subject to deportation.

Holy crap, who the hell is the editor that let this piece of work get through. It appears that Kathy didnt even read the articles she referenced. “However, many police departments have opposed SB-54 over concerns about the threatened loss of federal funding from the Trump administration.” The article cited here says they are concerned that violent criminals will walk free, and that they would lose funds. It mentions no threat from the Trump admin, because there is none. They are obviously going to lose federal funds if they decide to stop enforcing federal laws. To the editor of the… Read more »

More drivel and rhetoric published by liberal zombies… how about the Daily Nexus get back to reporting local news and refrain from publishing errant political based articles.

Seriously, this online posting does not even qualify as a “news article” for it is not objective and its message is to violate Federal Law. In my opinion, liberalism is no longer a viable political view for it has been hijacked and taken over by fascists. President Trump has done more in the past year than the previous sitting president had done in eight years. A legacy of ashes… that is what the previous president will go down in history for “creating”… a legacy of ashes. Just ask the Middle-East, Europe, Mediterranean, Israel, United States… all of them were negatively… Read more »