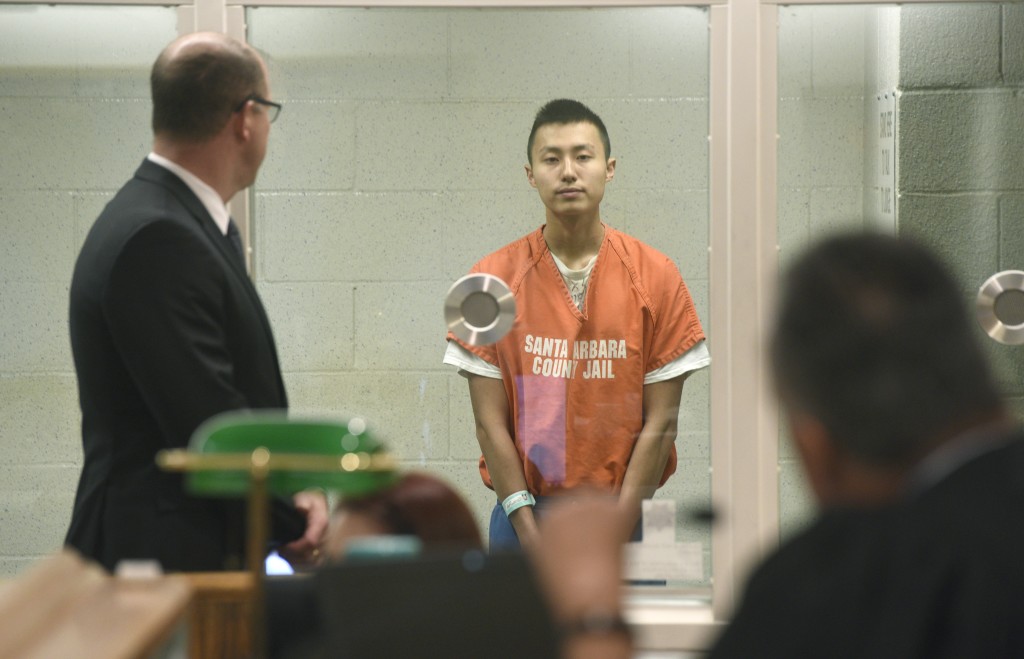 Daniel Jiang Chen (center), was charged with two counts of rape and represented by defense attorney Adam Pearlman (left) on February 16, 2016. He entered not guilty pleas in February, but pleaded guilty to three felony counts in front of Judge James E. Herman on August 30, 2017. Pool Photo

A former UC Santa Barbara student was convicted of violently raping a female UCSB student in February 2014 after he pled guilty to multiple felony counts on Wednesday.

Daniel Jiang Chen, 22, faces a 36-year sentence for two felony counts of rape and one felony count of robbery. He will be sentenced in October.

UC Santa Barbara Police arrested Chen in San Ramon, Calif., two years after a female student was brutally raped and assaulted near the UCSB track and tennis courts on campus. He has been held without bail since his arrest.

Chen appeared in formal clothing, wrist shackles and foot restraints for a plea hearing in front of Judge James E. Herman at the Santa Barbara Superior Court on Wednesday. He was convicted of two counts of rape and one count of robbery for stealing the victim’s phone after the attack.

He was also convicted of two special allegations of committing great bodily injury and one of kidnapping with the purpose of committing rape.

In February 2016, Chen pleaded not guilty to both felony rape counts.

Benjamin Ladinig, the prosecutor for the case, questioned Chen during the hearing. Chen admitted to each felony count and special allegation and waived his right to a trial.

The victim, known in the case as Jane Doe, was also present at the hearing.

Five witnesses testified against Chen in October 2016. Cynthia Hecox, a registered nurse, examined the victim after the sexual assault. She said she had to leave the room when she saw the woman’s injuries, which included a ruptured ear drum, a broken nose and severe body and vaginal trauma.

Though the victim was psychologically traumatized after the attack, UCSB Police Detective Dawn Arviso described the woman as a “survivor” multiple times during her testimony.

The victim and several witnesses will likely be present at the sentencing hearing in October to gain closure, Ladinig said.

Police located Chen when his DNA sample from an unrelated felony arrest matched evidence from two condoms at the crime scene. Due to the presence of strong DNA evidence and other factors, Ladinig said, Chen’s lawyers negotiated a mutually beneficial agreement before going to trial.

Chen will be registered as a sex offender for life after his sentencing. Due to the nature of his crimes, he will face 15 years of parole after his release from prison.

The sentencing hearing will take place on October 20 at 1:30 p.m. in Department 1 of the Santa Barbara Superior Court.

The victim also filed a civil suit against the UC Regents in January, claiming the location of the attack had dense foliage which allowed the rape to occur.

The UC Regents failed in their initial challenge of the allegations, and attorneys are currently negotiating whether the case will go to trial or end with a settlement.

I’m glad they caught this dirtbag and hope he enjoys his time in the penn. Hopefully they put him in gen-pop somewhere hardcore. I think it is ludicrous that UCSB is being sued though for having bushes and trees. This needs to get tossed out – the precedent this would create – can you imagine?