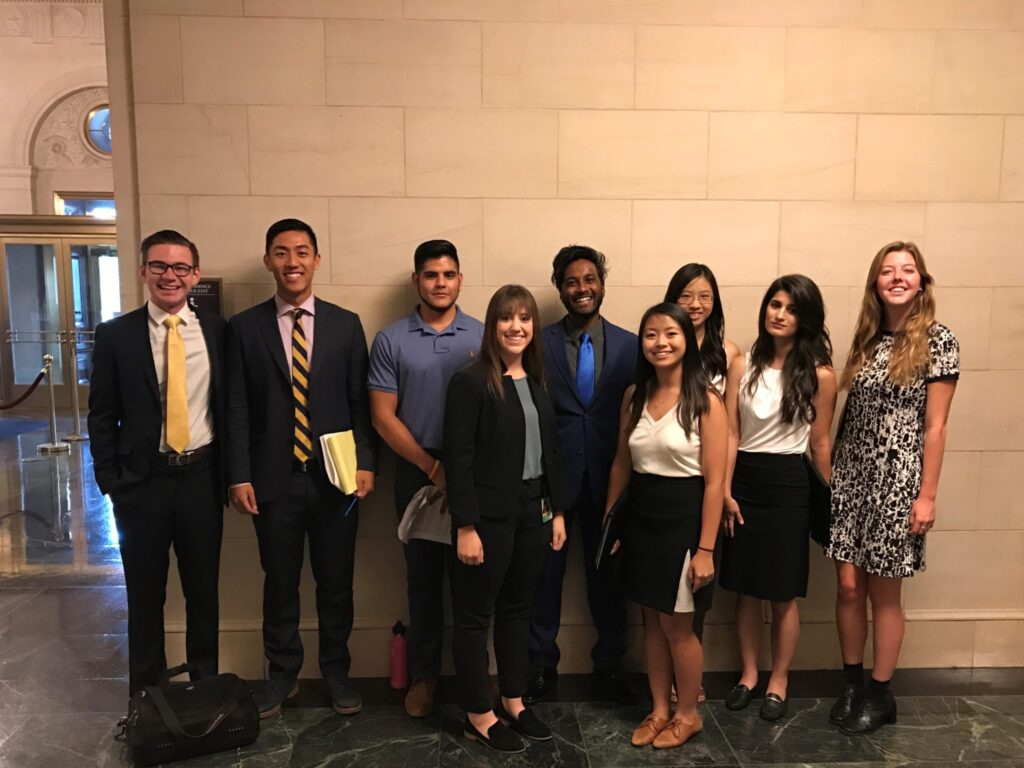 “We flew in on a red-eye flight Tuesday night, and we arrived Wednesday morning [at 7 a.m.],” said Kristin Hsu, external vice president of statewide affairs (EVPSA). “Three hours later, our group was ready to go and lobby.”

“These are issues that we deemed important because they were in response to President Trump’s proposed budget,” Hsu said. “We thought it was really important to get out there and make sure students were not forgotten when [representatives] were going through the budgetary process.”

The Trump administration released its proposed budget in May and severely cut funding to science and technology, the arts and social welfare programs. The Department of Education also lost 13.5 percent of funding, resulting in potential cuts to Pell Grant and options for repaying student loans.

Spencer Brandt, legislative liaison for the EVPSA office, helped prepare for the federal advocacy visit by analyzing the budget and understanding how the Pell Grant and student loans would be affected. He said the group used different tactics to address each representative based on their political party or if they were members of specific congressional committees.

“[Representatives] care about their district, so we always tried to make sure we had one of the members’ constituents in the room so they could speak to the lived experience and connect on a personal level with the member or with staff,” Brandt said.

Brandt said it was also important for the group to show its support for the D.R.E.A.M. Act and undocumented students.

The bill, first proposed in 2001, would put DACA policies and protections from the Obama administration into law while also creating a pathway to citizenship for undocumented students.

“Here at UC Santa Barbara, we have a very large and thriving undocumented student community, and they’re feeling very threatened by the actions that we see from the [Trump] administration,” Brandt said.

The EVPSA office takes students on federal advocacy trips in Sacramento and Washington, D.C. throughout the year, but Hsu said this particular trip felt more “disheartening,” as many Democratic representatives appeared discouraged in the face of the Republican-majority Congress.

She said, however, a staffer from Representative Lucille Roybal-Allard reassured the group that the year-round Pell Grant would be reinstated, an advantage for students taking summer session classes. Hsu said she is also hopeful for the future of the D.R.E.A.M. Act because of its bipartisan nature.

“I think bipartisan efforts are hard to find, but when they are, they’re a sure fire way to get passed,” she said.

Despite the congressional Republican majority, Brandt said representatives were receptive to student concerns, especially when a student lobbyist was from the representative’s district.

“They’re trying to get re-elected, so it would be wise for them to hear their constituents out and hear their concerns seriously,” Brandt said.

Associated Students President Hieu Le was among the student lobbyists and said the smaller group of students created a more intimate environment and allowed for the students to “strengthen” their stories and engage with the representatives.

“I felt that by having such a small group of folks, we were able to really get to know each other in terms of our backgrounds that we come from,” Le said.

Hsu said the EVPSA office will be making more federal advocacy trips to Washington, D.C. in the coming year to ensure students are heard during this “critical” time in American politics.

UCSB students say, “Give me free stuff! I am entitled.”

Actually, students like those at UCSB are hoping for an equal chance, those that many here are entitled to. If anything, these students are going above and beyond those that are already documented and come from well off backgrounds receive.

Wow – what an insane waste of time. Pell Grants and the DREAM Act need to be eliminated – period!

Yep. The growth in the cost of higher ed tracks the increase in college administrative staff. We did fine without so many administrators before and can do so again. It also parallels the growth in government backed loans.

Agreed – for example – is Chancellor Yang really deserving of a $300K+ salary?

Right, Yang should go into industry ,where he can earn a lot more and not have to deal with whining left-wingers.

Sorry UCSB, you won’t ever get a dime from this alumna while you’re aiding and abetting criminals…which is what ILLEGAL immigrants are!

I was young, dumb, and liberal 25 years ago…just like you. Hopefully you’ll see the light like I did. Good luck.