The Daily Nexus
The Brew Review
Rincon Brewery Isla Vista, Where Everything But Good Beer Remains Untapped
July 29, 2017 at 12:34 am by Simone Dupuy

Long-time Pardall staple Gio’s was abruptly replaced by Rincon Brewery at the turn of July, and while the Carpinteria-based brewery’s reputation is already a step up from it’s predecessor’s in that it is clean of allegations of racism, this reporter’s outlook is dismal concerning whether the Rincon will make a particularly great name for itself. 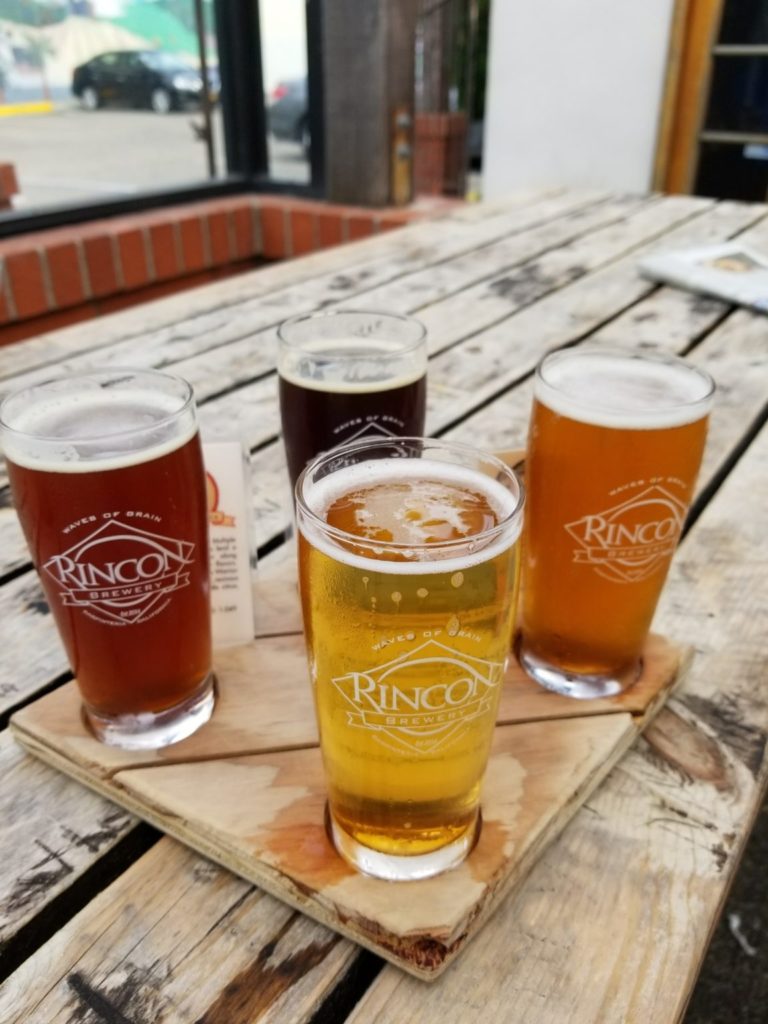 Don’t get me wrong; the beer was good. Pretty damn good, actually. Unfortunately, it needed to be better to make me want to come back to an atmosphere and menu reminiscent of a high school cafeteria. Of course, Gio’s was never on the cutting edge of decor – not even close – but I thought a small, local, craft brewery would have higher standards than a greasy sports bar or pizza joint. In fact, Rincon seems to be lowering the bar. The interior remains unflatteringly bright and industrial, and visitors on Alumni Weekend will be sad to see that all but two of their beloved, memory-scarred wooden tables outdoors have been replaced by pathetic and aesthetically offensive plastic ones. 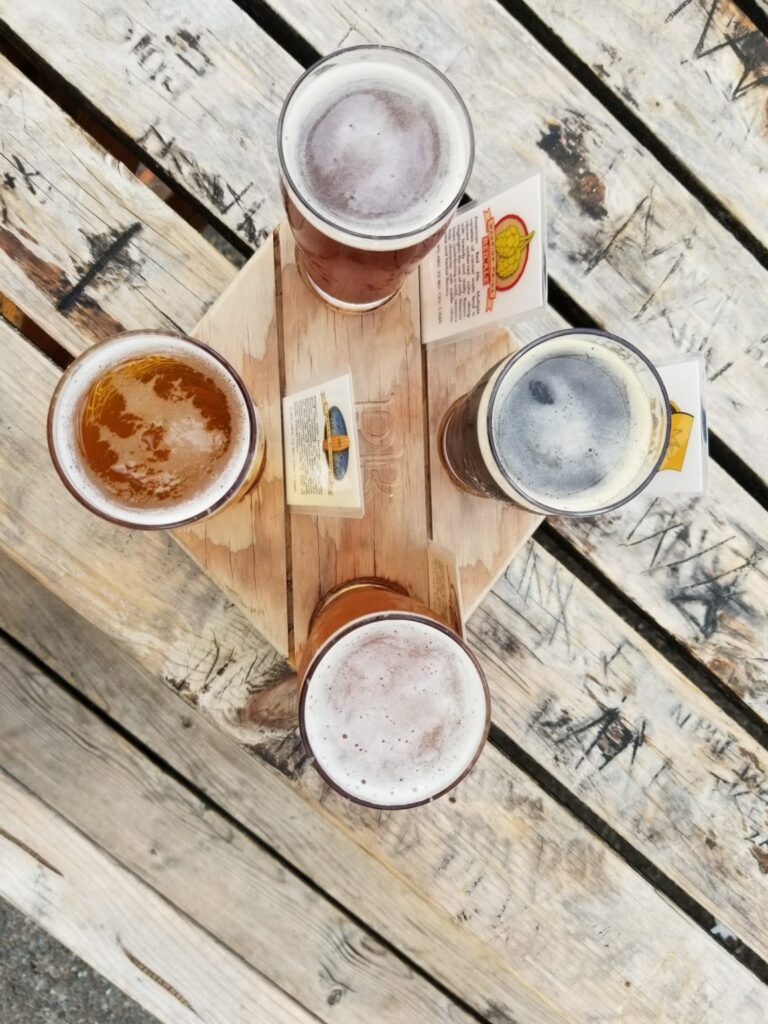 So. The beer. At Rincon, one has the option to sample a hefty flight of all four original selections currently available on the rotating tap for $17. This may seem steep, but it’s actually a better deal than buying the equivalent volume as individual pints, so I suggest sharing and sampling with friends. In any case, I had the pleasure of trying Rincon’s Bates Blond Ale, American Red Ale, 17 @ 17 India Pale Ale and Mac Brown Ale. They really like their ales here.

The blond was truly the height of its trade, and yellow beers are hip again, folks! Receding are the claims that aggressively hoppy IPAs and so-rich-they’re-just-barely-sippable stouts are the mark of true craftsmanship. Summer 2017 has brought with it a renewed appreciation for crisp Kölschs, Pilsners and lagers. I’m here for it, and The L.A. Times agreed last week. Anyway, back to the Bates Blond. Sparkling happily in its glass like some magical elixir, it was the highlight of my flight to both my eyes and palate. Fellow recent graduate Emily Kerchner and I both favored its light but still very flavorful profile with hints of citrus and a crisp, clean finish. Meanwhile, arguably more seasoned beer-drinker, yeast biologist and sixth-year Ph.D. candidate Kelly Thomasson was unimpressed but not critical. But what does she know, anyway?

Moving on to the American Red Ale, I was excited. I hadn’t yet met a red I didn’t love, whether it be Danish, Irish or, hopefully now, American? Alas, I was somewhat let down, but my expectations were quite high to begin with and so the ale garnered a second-place spot in my rankings regardless. In a few words, it was a stout disguised as an ale. Rich, malty, smooth, drinkable. Yummy. Kerchner, who is a weenie and only likes very light beers, declined comment save a weak, dissentful, “eehhmmm.” Thomasson said only “snoresville.” Again, what does she know, anyway?

The 17 @ 17 IPA was pleasantly mild, “refreshing and tasted like you got seductively slapped by a pine tree.” I’ll agree with Thomasson on this one. Those both in love with and wary of IPAs should give this a sip. Kudos to Rincon for matching flavors to season.

Finally, the Mac Brown Ale. Although this came in at my number-four spot, I didn’t dislike it at all. The dark brew was creamy and mocha-esque. The carbonation seemed more plentiful and effervescent, bringing to mind the sensation and flavors of enjoying a black cow (a chocolate ice cream and cola float to you uncultured root beer drinkers out there). All in all, this was a well-balanced and delectable flight. It seems Rincon curates its tap to complement both the seasons and one another. 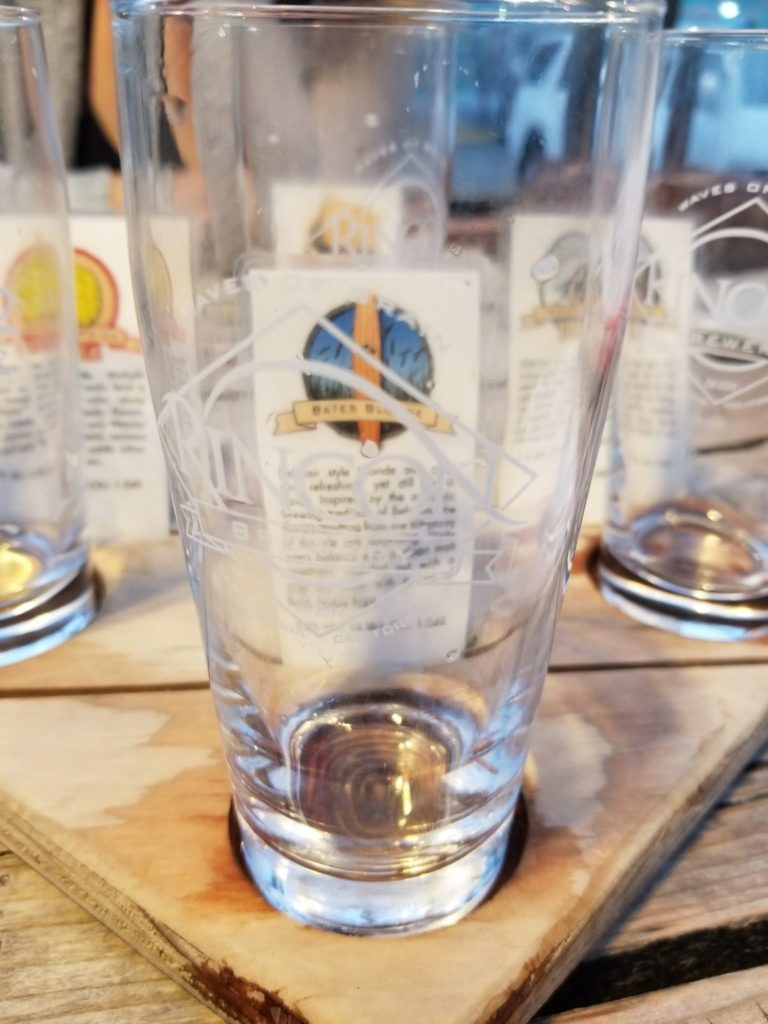 Now. The food. Supreme Culinary Overlord Anthony Bourdain once said, “Beer loves crispy. Beer loves salty. Beer loves fatty. Spicy, salty, fried, together? Happiness.” With items like loaded cheesy garlic bread on the menu, this is something Rincon gets right. But so has every other brewery since the beginning of time. If you’re missing Gio’s, don’t worry: Rincon still serves up a pie for any wanting beer bellies, and thank God they do, because we all know the Isla Vista pizza scene is lacking (For all you incoming freshmen, read: sarcasm). My team of tasters ordered three menu items: garlic breadsticks, a garden salad and a calzone. First off, breadsticks are impossible to screw up and always good. Moving on. The salad was one of the most pitiful things I have ever laid eyes on. It looked like the sweepings from under the Sizzler salad bar and, reportedly, tasted like it, too. The calzone, while an inevitable good partner to beer, was slightly doughy and undercooked. Moral of the story/great excuse to fill your body with trash: Just get breadsticks and beer.

Rincon will do well. It is an inevitable stop on The Loop, so only quitters and the faint of heart will refuse to pay it patronage. Still, I wish they’d put as much effort into their atmosphere as they put into their beer.

So Gio’s was sacrificed on the altar of political correctness?

Quite, we need to cover their arsses
Reply to  Anonymous

You won’t hear anything from the nexus on the gang of 24 and their unfounded declarations of criminal racism. The majority of funding for the paper comes from the AS senate distribution.
Besides, everyone involved went straight to hiding, and mums the word for the next nine months, in fear of a future libel suit. (There’s plenty sequestered student cabbage up for grabs)
The students, campus democrats, Yang, IV community district, the nexus and even Facebook Zuckerburg want this to go away.
SO QUITE DON’T ASK QUESTIONS.

Hello Isla Vista! Rincon Brewery took over Gio’s July 1. We are upgrading pretty much everything but it takes time. The restaurant did not close in order to keep the kitchen staff employed. The kitchen currently does not allow for grilling or frying until a new ventilation hood system is installed. Our plans are to bring our Carpinteria menu to Isla Vista as soon as possible. For now we are serving mostly Gio’s style pizza and will switching over to our own new pizza dough and style in a week or so. We will be introducing our Thai Chicken Pizza.… Read more »

Mark.., don’t listen to this Dimone Supuy, reporting on two collage girls tasting beer. Showed up when you’re not done yet, then acting like he was forced to watch sausage being made. When it was more like a privilege to witness a team of skilled plastic surgeons on the finishing touches of 70 year old woman. The other restaurant never had a decor, and the presentation of the California coastal surf town, with a simple efficient laid-back atmosphere is “top shelf” (it’s been 30 days….they could give you time to hang things on the walls.) I think you kept the… Read more »