Almost all animal behavior, including that of humans, is dictated by our circadian rhythms. These 24-hour cycles, regulated in part by variations in the light and temperature of our surroundings, are the reason why an eleven-hour flight from Los Angeles to Shanghai leaves you restless, fatigued and thoroughly jetlagged. In biology, the use of model organisms allows us to study these kinds of patterns in simpler systems. Drosophila melanogaster, the common fruit fly, is such an organism.

For quite a while, biologists believed the six identified light-sensitive receptors in the retina, called rhodopsin proteins, served the purpose of light sensation in the retina of the fruit fly. However, analysis of the Drosophila genome — fully sequenced as a result of its status as a model organism — revealed that a seventh rhodopsin should be present. The Craig Montell Lab at the Department of Molecular, Cellular and Developmental Biology at UCSB has managed to identify the function of this seventh rhodopsin as well as to establish its genetic expression pattern in the central brain of the fly. Their findings are published in Nature.

“Flies had six known rhodopsins that are expressed in different photoreceptor cells, but the Drosophila genome predicted, just from looking at the DNA sequence, a seventh rhodopsin,” Craig Montell, principal investigator and Duggan Professor in his lab at UCSB, said.

“No one had studied it because all of the known photoreceptor cells were already accounted for by the six known rhodopsins, Rh1 to Rh6. We found that when we artificially put Rh7 into the fly using molecular genetic approaches, that it could function as a substitute,” Montell said.

Having established Rh7’s function as a light sensor, the researchers then moved to determine the protein’s expression. What they found was that whereas the six previously identified rhodopsins were expressed in the retina, Rh7 was present in the central pacemaker neurons in the brain of the fly. 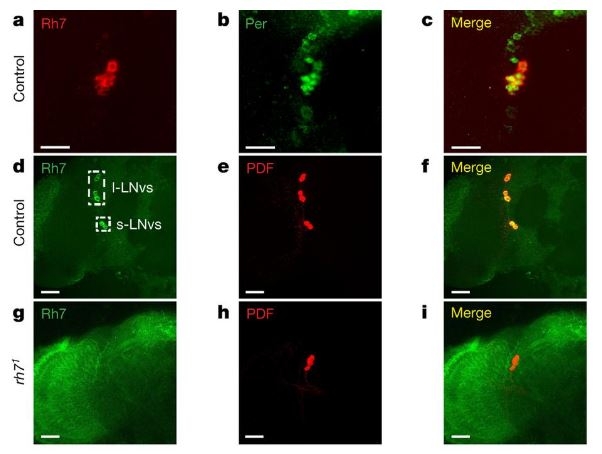 Rh7 in the central brain identified through the use of fluorescent antibodies. / Courtesy of Montell et. al www.nature.com

“As an animal, our activity patterns change over the course of the day. These daily changes in activity are circadian rhythms that change over a 24-hour cycle,” said Montell. “There are neurons in the brain that not only change their activity over the course of the day in response to circadian rhythms, but also will release neuropeptides that will affect other cells. These are central pacemaker neurons, which affect the activity of the entire animal.”

What’s more, there was already a known light sensor in the central pacemaker neuron. A different type of protein than rhodopsin, this sensor is known as cryptochrome. What sets cryptochrome apart from Rh7 in the central brain is highly reduced light-sensitivity in vivo, at least in comparison to Rh7.

This is because cryptochrome, unlike Rh7, does not set off a G-protein-coupled signaling cascade. On the other hand, interaction with light causes Rh7 to set off a signal that is amplified as it travels down a system of proteins in the pacemaker neurons of the central brain.

“It was already known that cryptochrome was a light sensor in the same cells that express Rh7, and when you get rid of cryptochrome genetically there are impacts on circadian rhythms, but the ability of these central pacemaker neurons to respond to light is reduced but not eliminated,” Montell said. “If you make a double-mutant now between cryptochrome and Rh7, the effect on circadian rhythms is much more severe. The two of them together are very important.”

Having established not only Rh7’s ability to function as a light sensor but also its location in the pacemaker neurons of the central brain, Montell and his lab then moved to identify Rh7’s function in modulating circadian rhythms in the fly.

“In a wild type Drosophila fly entrained to a normal twelve-hour day/night cycle, the first time you do [extend the light period], at twelve hours, the fly starts to show the kinds of activities that it would normally show when it’s time to shift to night,” Montell said. “A wild type fly, unlike us, will recover pretty fast. But if you got rid of either Rh7 or cryptochrome, the fly would take much longer to readjust to that long day. In fact in the double mutant it took even longer; the jet lag was worse.”

Rh7’s position and function in the central pacemaker neurons of the fly brain posits it as a likely candidate for a homolog of a mammalian protein that plays a similar role. In mammals, some of our retinal ganglion cells (RGCs) extend their function beyond simply receiving signals from rods and cones and transmitting these to the brain via the optic nerve. About one percent of RGCs are intrinsically photosensitive, called ipRGCs.

By identifying Rh7 as a potential equivalent of mammalian ipRGCs, this research furthers our understanding of not only regulation of circadian rhythms in a model organism — which on its own broadens our understanding of the system and how it functions — but it also allows us to pose a number of new questions.

By conducting more research that not only seeks to answer these questions but also expands on discoveries like those made by the Montell Lab in their paper, we may be able to comprehend the modulation of circadian rhythms and the functional role of rhodopsins outside the retina in organisms beyond the simple fruit fly.