While many residents in Isla Vista were coping with hangovers and dirty apartments the day after Deltopia weekend, a group of UC Santa Barbara fourth years and alumni opted to embark on a long-desired kayak voyage to the Channel Islands. 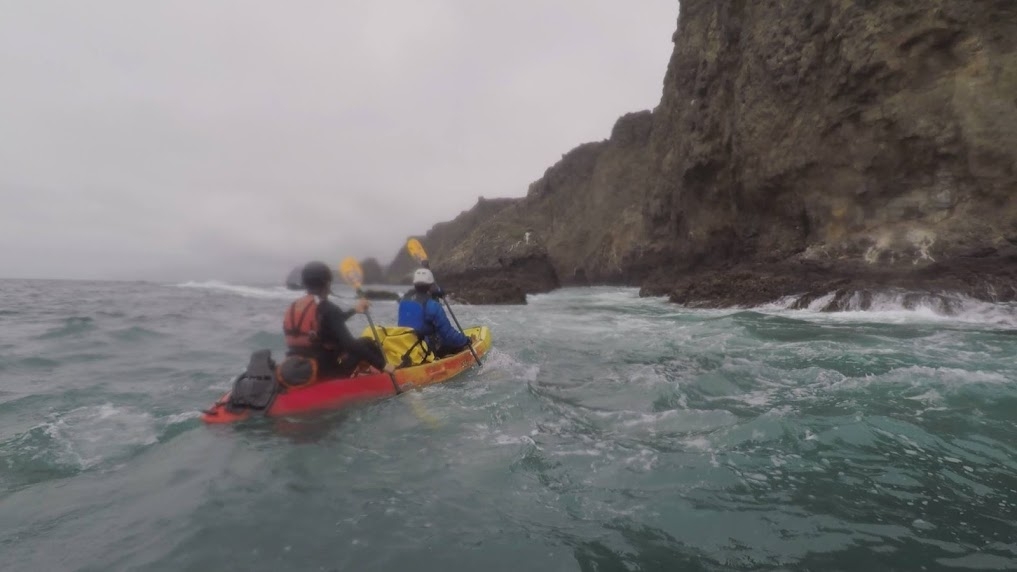 They had been training for months to trek the 13 miles across the channel, but nothing could prepare them for what lay ahead.

The group launched at 8 a.m. from Channel Islands Beach in Oxnard and soon met several hiccups.

To begin, the group had not weight-checked their kayaks prior to launching, and, as a result, some members capsized within the first few hours.

They also discovered that the radios that they had brought were malfunctioning, which left the kayakers unable to call in for help in the event of an emergency.

Additionally, a thick marine layer of fog that April morning made for especially low visibility. Byron Roos-Collins, fourth-year political science major, said the group could hardly see further than a mile ahead of them. Much of their trek across the channel incidentally followed a zigzag course.

After paddling for several hours, the group of six reached the middle of the channel, a site of high traffic for cargo ships.

As the kayakers waited for a cargo ship to pass, they spotted a dorsal fin emerge from the water approximately 20 feet away. It was a distinctly triangular fin jutting nearly three feet above the ocean surface, one that the kayakers knew could only belong to a great white shark.

“I’ve seen thousands and thousands of dolphins and whales, and this was neither of those,” Roos-Collins said.

With the large freighters still passing by around them, the group found themselves unable to paddle away from the shark; they were stuck. The six kayakers had no choice but to stay put and prepare for the worst.

Anticipating that the shark might mistake the kayaks for seals, the group put their kayaks together to form a larger vessel. Each person had a spear gun or buck knife at the ready.

Nik Frey, a UCSB alumnus who had recently returned from volunteering as a frontline medic in Mosul, Iraq, began giving the group instructions on how to apply a tourniquet, just in case anyone in the group lost an extremity in a bout with the shark. He also advised that, in the event of a shark attack, the kayakers stab the shark in its “sensitive face” rather than spearing it “willy-nilly.”

When the freighters passed, the kayakers immediately took the opportunity to make a full charge toward the island. They only made it halfway across the shipping lanes when they spotted the dorsal fin of yet another great white shark.

“That one was more disheartening I think,” Roos-Collins said.

Fortunately, the shark was uninterested and passed by the group.

Spirits were low at this point, and the kayakers decided that they would wave down the next boat that passed them in hopes that it would rescue them.

When a boat finally did pass by, the group waved their hands in the air and blew whistles to get the driver’s attention. Frey said the driver “must have seen” them, but the boat did not stop for them. The group was left “totally abandoned,” Frey said.

“They gave us no love; they just kept on going,” Roos-Collins said. “It was pretty clear they had seen us.”

Help was nowhere to be found, and the group knew they had no choice but to finish the trip. Establishing their compass angle again, the kayakers set off to reach Anacapa Island before the close of day.

After a few hours more paddling through heavy fog, the kayakers were in close enough proximity to the island to see its ghostly shape. It was at this point, Frey said, that the group realized their incorrect compass angle nearly led them to miss the island entirely.

The kayakers immediately corrected their bearings, pointing the tips of vessels toward the large land mass in the distance. With strong winds at their sides, however, the kayakers had to angle themselves in such a way that the wind would hit the tail of the kayak.

The kayakers finally reached the shores of Anacapa Island at 4 p.m., approximately eight hours after first launching from Oxnard.

Roos-Collins said their arrival greatly surprised the park ranger, who before that point was the only other person on the narrow archipelago composed mostly of jagged volcanic basalt. The primary occupants of the island were thousands of seagulls, highly aggressive during mating season.

The group set up camp for the night in a site that they had reserved prior to embarking on the trip. They sat atop a high rock formation and enjoyed what Roos-Collins called “one of the most satisfying sunsets” he had ever seen.

Daniel Connell, fourth-year financial math and statistics major, said the linguini that they ate that night was the highlight of the trip.

The six kayakers spent the next morning freediving and exploring the island’s various caves until a pre-booked ferry picked them up in the afternoon and took them back to the mainland.

On their ferry trip back, the six students and alumni shared a beer, reveling in a trip that had turned out to be a success despite many setbacks along the way. 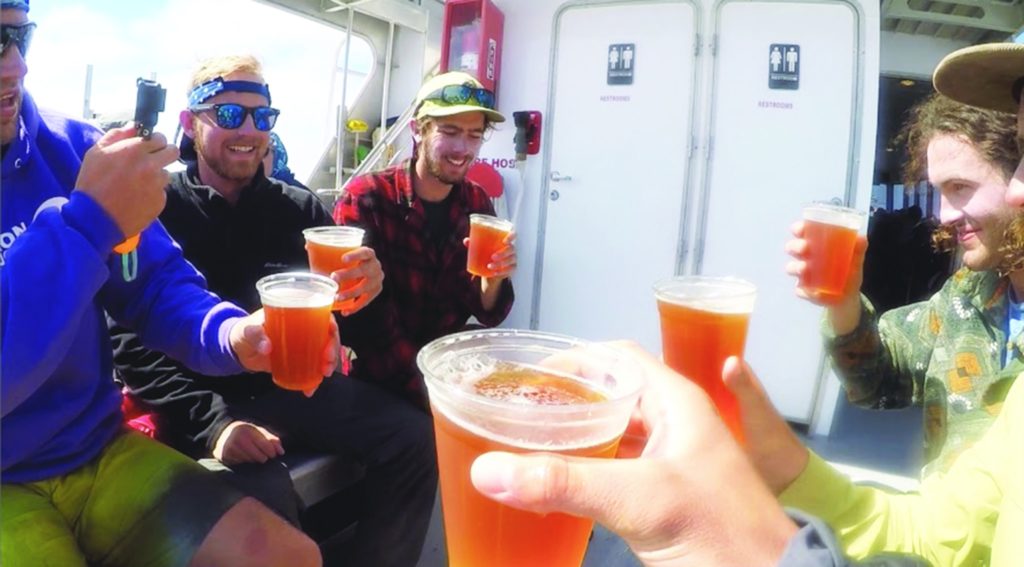 After spending the next morning freediving and exploring the island’s various caves, the six kayakers enjoyed a beer on their a pre-booked ferry back to the mainland. Courtesy of Byron Roos-Collins

Set to graduate in a little over a week, Roos-Collins said no other adventure he embarked on in the past year can top last month’s trek to Anacapa Island.

For Connell, who will also be graduating soon, the kayak trip ranks “damn near the top” among his overall experiences as a UCSB student.

“We’re fortunate enough to have ocean views from our homes currently, and waking up in the morning and going out on the deck and actually seeing those islands in the distance is kind of a constant reminder of the journey,” Connell said. “I can kind of look in the distance and see where we encountered some sharks and where we were eating salami. It’s a pretty cool thing to see on a day-to-day basis.”

Please if you’re thinking of doing this, be more prepared. A GPS instead of a compass and a marine VHF radio to call for help from nearby boats or coast guards are basic requirements for such a trip

They had both on their trip

We definitely had both a GPS and radio on the trip. Radio malfunctioned though. Wouldn’t advise going at it without those items!

Sit on top, instead of real kayaks, are a big mistake for an ocean trip.

“When everything goes wrong – that’s when adventure starts” -Yvon Chouinard