The Daily Nexus
News
ROTC Cadets Conquer Mount Whitney in Under 15 Hours
June 1, 2017 at 12:28 am by Megan Mineiro

While throngs of students echoed the lyrics to Schoolboy Q’s “Collard Greens” in the sunny haze of Extravaganza, a group of Reserve Officers’ Training Corps (ROTC) cadets were headed back to Isla Vista after accomplishing an impressive feat: climbing the highest mountain in the lower 48 states in under 15 hours. 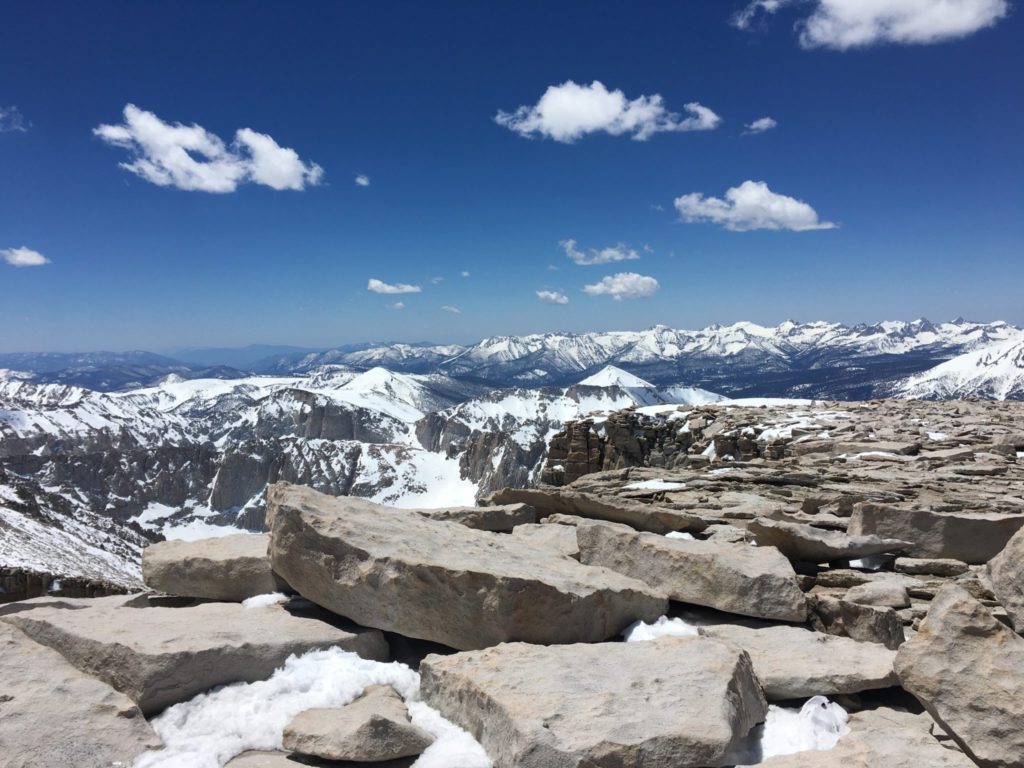 Sixteen UC Santa Barbara students set out in the early morning hours of May 21 to climb Mount Whitney in just a single day, conquering the 14,505-foot peak located in Sequoia National Park. The group had no high-altitude training and no previous experience hiking the summit.

The climbers woke up the day of the climb at 2 a.m. to begin the ascent by 3 a.m. They summited the mountain by 11:30 a.m., taking a one-hour break at the crest and then continuing down the mountain to reach the base at approximately 5:30 p.m. By midnight they arrived back in I.V., and many cadets attended class the following day.

The excursion was incorporated into the ROTC preparation for the Ranger Challenge competition in Fall Quarter, during which 11 UCSB ROTC cadets compete as a team in a series of military skills events against teams of cadets from other universities around the country.

ROTC cadets Dominique Chan, third-year global studies major, and Theo Vance, second-year communication major and a team captain who helped organize the climb, both described the ascent to Mt. Whitney’s peak as a mental and physical test that rivaled anything they have experienced in their cadet training.

The typical hiker will take two days to make the climb, camping overnight at 10,000 to 12,000 feet to acclimate to the elevation and then summit the mountain the following day.

Both Chan and Vance agreed, however, that the one-day climb made for a more rewarding endeavor, with more notable bragging rights.

“I have never done something that gnarly before. I knew it would be hard. I didn’t realize it was going to be that hard,” Vance said. “But it was the comradery of it. ROTC kids are kind of tough by necessity. So just knowing that you’re not the only one being pushed, that you’re all in it together, and you start as a team, and you finish as a team.” 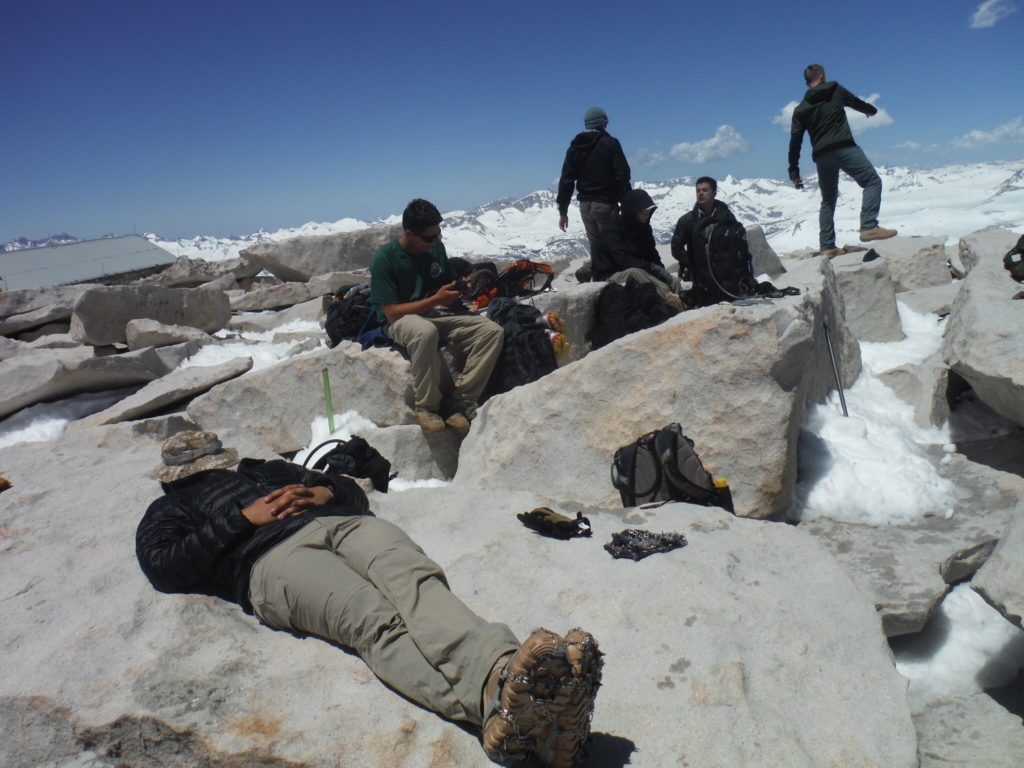 Chan said the climb was definitely harder than she had anticipated. Though many cadets had taken Diamox prior to reaching Mt. Whitney, a diuretic that reduces the symptoms of altitude sickness, the elevation was by far the most difficult aspect to overcome and caused extreme shortness of breath and painful headaches throughout the group.

“Reaching those heights in one day really starts to get at you,” Chan said. “[Elevation] really is the great equalizer and it’s quite humbling, actually … There’s still that kind of varying level of fitness, but I think it’s interesting that the most fit cadet was struggling, relatively, as much as the least fit person who went up to Mt. Whitney.”

Vance said the cadets were told this was likely one of the most challenging times in the last 10 years to make the climb because of heavy snowfall this past winter.

“The trail normally takes you on this marked path that has a railing and all this stuff. That was about 10 feet below us, apparently, from all the snow,” Vance said.

He added that the use of ice axes and crampons, traction devices attached to footwear for improved stability, were “absolutely vital” because the path was difficult to navigate.

Vance said the warm weather made for a beautiful day to climb but also increased the difficulty of the ascent.

“[The snow] was very soft, very sludgy, and that’s very dangerous on this portion called the chute, which is kind of the steepest part,” Vance said.
The cadets made the climb up the snow chute, an area directly between the switchbacks and face of the mountain, in approximately an hour and a half with the help of their snow equipment.

“It’s just straight absolute uphill, and you are just ice-axing it the entire way and using your crampons,” Vance said. “Even with that, you’re slipping and sliding sometimes, and you lose your footing.”

“Without the crampons, we could have fallen to our death, basically, or rolled down, tumbled down,” Chan added.

Vance said being comfortable with the ice equipment became critical on the descent down the snow chute, a 60-degree downhill that measures approximately 1,500 feet.

“The chute, because it was so steep, there’s no way to get back down,” Vance said. “So it took us about an hour and a half, hour and 40 to get up, and for me personally it took about 35 seconds to get down.” 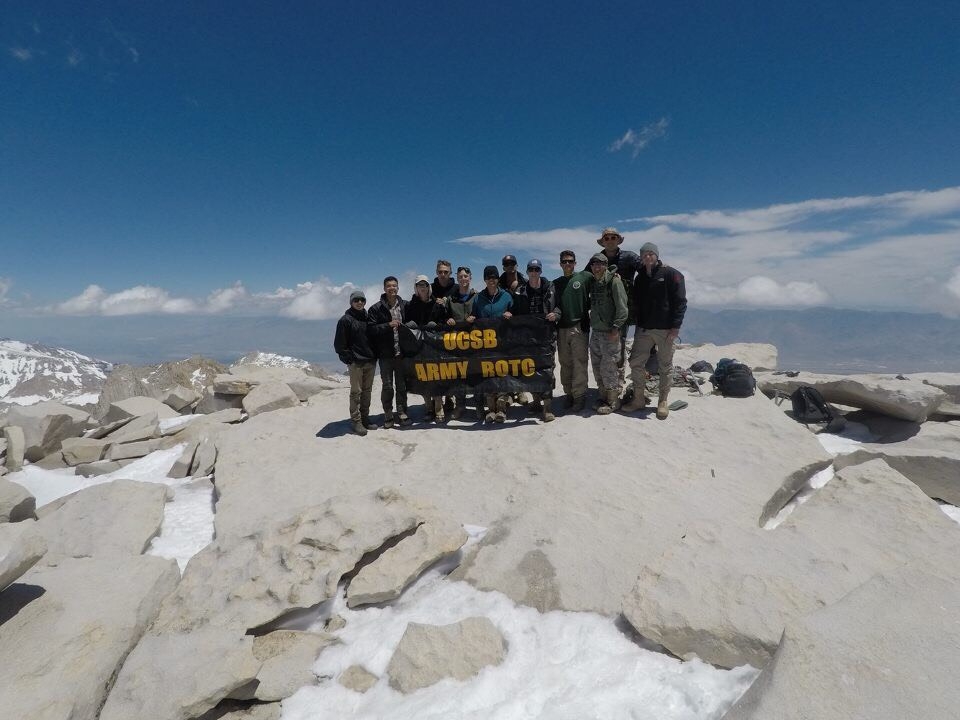 The cadets trekked through varied terrain throughout the day, with changes in environment coming quickly with little warning.

“When you’re coming up, it’s just kind of mountain wilderness,” Vance said. “Then eventually, out of nowhere, it just turns into snowy woods … The higher you get it just becomes more and more just kind of rocks and boulders and just snow. Then, once you get past the chute, it’s just all mountain range. Once you’re up at the steep portion, you go behind this ridgeline, and pretty much there you can see just for miles, just mountain tops.”

“At that point you’re going single file, so you get to the hardest part, and then single file, you’re hugging the side of a mountain,” Chan added. “That’s like 13,000 feet, so the last part is only a thousand-foot climb, but it’s just, like, two more miles of just making your way up there.”

Vance said while the snow made the journey more challenging, it also added to the beauty of the scenery.

“You can see just mountain ranges on mountain ranges and you can see the lakes and rivers and stuff, but they’re frozen over,” Vance said. “It’s kind of interesting to see the different tints of snow because you can pick out different landmarks, but it’s still just all snow. It’s really beautiful.”

Cadets who wanted to make the climb trained throughout Spring Quarter at 5:30 a.m. three days a week for an hour prior to their required ROTC workouts at 6:30 a.m. The group also met Wednesday nights for skills training, for a total of four additional hours of training a week.

“The team that wanted to come out, we had tryouts, and kind of the incentive for them to work hard this quarter was that at the end we would climb Mt. Whitney,” Vance said. “The training was kind of geared around getting people in shape for Ranger Challenge and teaching them stuff that they would need to know but also to prepare for Whitey as well.”

Both Chan and Vance said they packed only granola bars and water to sustain themselves through the climb.

“I had probably a 25-pound pack and half of it was probably water. I didn’t end up drinking all of it, but it was important that some people brought more for the people that brought less because a lot of people ran out along the way,” Vance said.

Chan said as an inexperienced climber she appreciated all the research the team captains put into preparing for the trip to ensure the entire group’s safety.

“The team captains made sure to really study up and research what was needed ahead of time to really make sure to take care of their people,” Chan said. “Overall, not only was it a really cool adventure, but I think it was a really good leadership training exercise for the people who were in charge of this trip.”

Vance said although four members of the group had to turn back due to altitude sickness, he was still very happy that the remaining 12 were able to reach the summit with little trouble.

“We all came back as a group,” Vance said. “I was very, very impressed with how many people got through it, considering how tough it was and just the conditions … like the sheer brutality of it, because altitude sickness is one of those things you can’t train for.”

Chan said team comradery motivated the cadets to reach to the top, as they relied on each other for support to push their physical and mental boundaries.

“There were definitely periods of just silence, I think mostly because people were just so tired and so focused that it would take even more energy to even talk,” Chan said. “But I don’t think I could have made it up there without all my friends.”

Hell yeah cadets! Stoked you guys did this. Way to carry on the tradition!