Paola Dela Cruz was once considered an “at risk” youth; she used to get in fights, routinely show up late to class and fail to turn in homework assignments. She was nearly expelled from her high school in South Los Angeles.

After her high school Spanish teacher took an interest in her, however, Dela Cruz ended up graduating from high school as an honors student and student body president.

Now, four years later, she will be graduating UC Santa Barbara with a bachelor’s degree in history of public policy and the Thomas More Storke Award, the highest honor at the university. 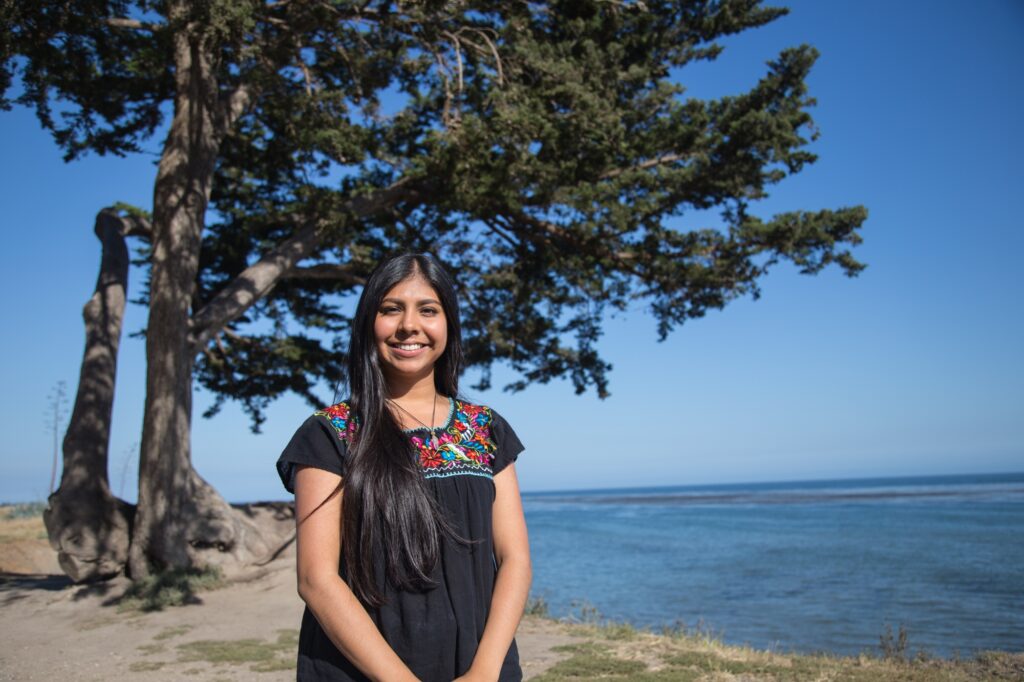 Fourth-year history of public policy major Paola Dela Cruz was notified over a week ago that she won the Storke Award through a personal phone call from Chancellor Henry T. Yang. The Storke Award is the highest accolade a student can receive at UCSB. Jenny Luo/Daily Nexus

“I am a real-life example of second opportunities and believing in the potential of kids despite what is happening around them,” she said.

Dela Cruz tells people with pride that she is from Compton. She sees a great deal of similarity between Compton and Isla Vista, especially in the negative narratives that have come out of both communities.

Compton’s reputation of crime and violence had, for a long time, kept her from sharing about her hometown. It was during her time at UCSB, however, that she learned to embrace Compton and to take pride in the “solidarity between black and brown people” there.

Dela Cruz was just a freshman during the Deltopia riots and the Isla Vista shooting of May 23, 2014, which both occurred within a month of each other. The news coverage portrayed I.V. with a lot of “negativity,” she said, and she began to see the same narrative come out of I.V. as with Compton.

From then on, Dela Cruz set out to make known the positive aspects of Isla Vista: its “wonderful” parks and the children and families that live here alongside college students.

Dela Cruz was elected as an Associated Students (A.S.) senator in 2014 and sworn in days before the shooting. Later that year she won election as a board director with the Isla Vista Recreation & Park District (IVRPD), which was, at the time, the only government agency in I.V.

Having served a year with IVRPD and A.S. Senate, Dela Cruz sought election as the A.S. external vice president of local affairs (EVPLA).

As EVPLA, she created the Beloved Community Conference, an annual meeting for Isla Vista residents to voice their experiences and concerns.

However, her term was characterized largely by her outreach to I.V.’s Latinx families, which she said exist behind a “barrier” beyond the community of college students in Isla Vista.

“It’s not about, ‘These poor families; they need our help.’ It’s not about that. It’s about, ‘How can we work together and help together?’” she said. “Let’s just talk. We’re friends, we’re just ‘gente,’ we’re ‘raza.’ Let’s just get together and talk.”

The Storke Award recipient is selected by a committee appointed and chaired by Margaret Klawunn, the vice chancellor of student affairs.

The committee looks for graduating seniors who have demonstrated outstanding scholarship and extraordinary service to the university and its students. Katya Armistead, dean of the Office of Student Life, said the recipient must demonstrate courage, persistence, achievement and a GPA of 3.5 or above.

“[Dela Cruz] leads with her heart, but she’s also brilliant. That combination, when you see it in someone, it’s pretty rare,” Professor Rick Benjamin, one of several faculty and staff to nominate Dela Cruz for the Storke Award, said.

“[Dela Cruz] leads with her heart, but she’s also brilliant. That combination, when you see it in someone, it’s pretty rare.” -Professor Rick Benjamin

Pegeen Soutar, the chair of the IVRPD board, said that Dela Cruz demonstrates a wonderful understanding of Isla Vista and that long-term residents adore her.

“I think she just has an outstanding commitment to this community,” Soutar said. “The woman is smart, she’s compassionate, she really listens.”

Rachel Arriaga, an analyst in the Office of the Vice Chancellor of Student Affairs and another staff member to nominate Dela Cruz, said Dela Cruz blossomed at UCSB and became a leader in the community.

Dela Cruz is graduating with a 3.7 GPA, and she is completing her thesis on the history of the Ventura School for Girls, a California state institution established in 1913 for delinquent girls.

Dela Cruz said she heard that she won the Storke Award after receiving a call from Chancellor Henry T. Yang around midnight over a week ago. She said her first reaction was to hide; she couldn’t believe she had been given the award.

“All these wonderful women I’ve worked with came to mind,” she said. “The reason why I’m getting it is in so many ways because of you all.”

After graduation, Dela Cruz plans to participate in the California Capital Fellows Program and work on a graduate degree in public policy from Sacramento State.

Much further into the future, Dela Cruz says she hopes to attain a law degree and later work with youth who face serious criminal sentences.

Reflecting on how she’s grown while at UCSB, Dela Cruz said she’s become more comfortable as a woman of color, learning to heed the advice of poet Audre Lorde to “trust [her] gut.”

I am writing this comment with the most humble and honest intentions; grateful for the plethora of love and support I am receiving as this year’s Thomas More Storke award recipient. However, I would like to share a potential teachable moment offered in the headline used by the Daily Nexus. For me, being characterized as an “at-risk” youth is not only an inaccurate statement, but also an injustice to my being, my accomplishments and my community. I do understand that for many, they may actually consider themselves “at-risk” but that is simply not true for me. In fact, I am… Read more »

Well said Paola!! We need to shift the narrative that is imposed on our experiences and the labels that come with them. I am so proud of you for all of your hard work and commitment to our communities. You are a shining beacon of hope for our future. Much love and respect to you mujer.

Paola, your response is superb and, I hope, well received. I look forward to hearing and reading more testiments to your intellectual and compassionate prowess. Congratulations my dear. It was an honor to be a part of your educational experience.

Thank you for this comment!!!! The only thing youth are at risk of is succeeding!!!

^^^Daily Nexus, I hope this is a teachable moment for you about the utter futility of pandering to SJWs.

You can fuck off Jason

Agee with you Jason Garshfirld. The person honored seems to be offended that she is grouped with ‘at-risk’ because she feels like she’s been given more opportunities or grew up not in a place of crime or poverty like she stated she was not from.

I knew this girl in High School and I go to another UC as well. She is very motivated and intelligent. You equate this young woman’s success to leftist pandering? Get a grip.