The Isla Vista Community Services District (CSD) held a town hall to discuss public safety this Tuesday, the first of its kind since the district was established.

During the meeting, attendees raised the possibility of creating a civilian review board and improving transparency in law enforcement’s crime reporting.

Over 40 people were in attendance at Tuesday’s meeting, with several people voicing their concerns about the way law enforcement deals with cases.

The town hall began with a description of the CSD and its powers. Assembly Bill 3 (AB 3), the bill that established the I.V. CSD, allows the district to provide eight specific services, including the ability to “contract” with the county and the UC Regents for “additional police protection services.”

The CSD’s board is looking to exercise that power to improve public safety, as the amount of reported sexual assaults reached 48 this previous year.

Members of the public took issue with the way law enforcement distributes information about crimes. During public comment, many said they were worried some crimes were not being reported in UC Police Department (UCPD) timely warnings or in the Santa Barbara County Sheriff’s Office (SBSO) press releases.

Torres alluded to a crime reported by SBSO in April, when two male subjects allegedly assaulted a 28-year-old man after making comments about his sexual orientation. The event occurred on Sunday of UC Santa Barbara’s pride week, and while SBSO investigated the incident as a hate crime, it did not release a statement immediately.

“When you are a part of these communities and people in your community are physically getting assaulted because of their identity, that’s something people need to know about ASAP,” Torres said.

I.V. resident Andrew Pragin expressed his own concern over why he did not receive a timely warning email from UCPD about a stabbing this weekend, which UCPD Chief of Police Dustin Olson addressed by saying the department does not send timely warnings for every incident in I.V.

Olson said not all incidents are handled by UCPD because its main jurisdiction is the UC Santa Barbara campus and it is not responsible for patrolling all of the I.V. area. UCPD has a crime log on its website of all the incidents the department responds to, he said.

“I think some of the misunderstanding is that the UCPD or the campus has this overarching obligation to send out timely warning to the I.V. community, and that’s not always the case,” Olson said.

In reference to the stabbing, Olson said since there were arrests made and there was no more “ongoing risk” to the public, an additional alert is not recommended.

“They would frown on us just sending out the alerts under those circumstances,” Olson said. 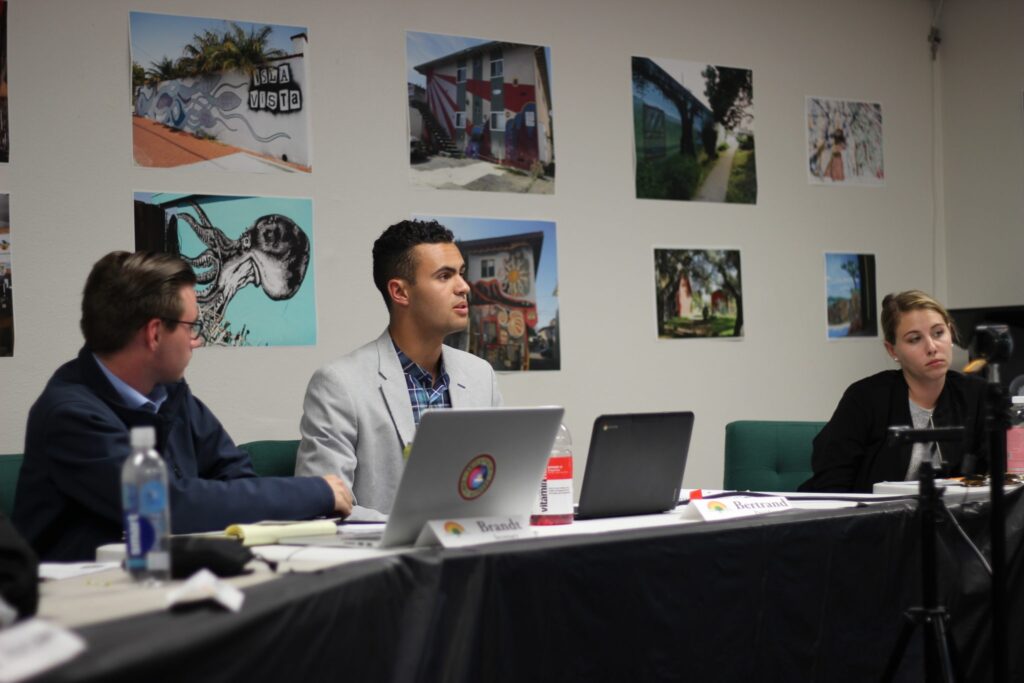 While Olson said additional alerts in these cases are excessive, members of the public express a desire to know more about the process that their cases go through after they are reported to the police.

Stoll said she and her friends suspected they were being stalked one night in I.V. and reported the incident to the Isla Vista Foot Patrol (IVFP), but she said they did not receive follow-up information about what the authorities were doing to investigate the incident.

Stoll said she would have liked to know what steps IVFP was taking to investigate the incident and said she believes the public would benefit from understanding the steps law enforcement takes when responding to the public’s concerns.

“It would be helpful if there was some sort of response system where the person was aware of how it was being dealt with for peace of mind,” Stoll said.

Among the proposed solutions to the public’s interest in the investigative process was the formation of a civilian review board to internally analyze the work local law enforcement is doing.

Third District Supervisor Joan Hartmann brought into question the way crime is being analyzed, questioning how the law enforcement groups that patrol I.V. are using their data.

“In the past we’ve done some bait bike enforcement … We have GPS tracking devices. We certainly see that bike theft is a big issue on campus,” Olson said. “So we do have a number of issues that pop up and we track the data and we look at times and we do deploy officers accordingly.”

Hartmann said while law enforcement agencies are collecting data, the way they currently analyze it leaves room for improvement. She said she met with the County Executive Office to discuss data analysis and found that “internally we don’t do that as well as we should,” and she and believes this is the starting point for addressing crime in I.V.

CSD board members proposed alternative modes of policing that are intended to be less intimidating than traditional police and would aid in improving public perception of law enforcement.

The board suggested the expansion of the Community Service Officer (CSO) program currently put in place by UCPD as well as creating a “Student Neighborhood Assistance Program” (S.N.A.P.), both of which work as intermediaries between police and the public.

According to the board’s presentation on public safety, S.N.A.P. would use student works as “first responders” to noise complaints, which they believe would help deescalate confrontations with police in I.V.

A version of this story appeared on p.1 of the Thursday, June 1, 2017, edition of the Daily Nexus.