The Daily Nexus
News
Suit Against I.V. Shooter’s Housing Complex Progresses
May 25, 2017 at 12:39 am by Jose Ochoa

With a court date set for Sept. 15, the parents of three victims of the May 23, 2014, shooting are moving forward in a lawsuit against the Isla Vista apartment complex where the shooter lived and murdered the parents’ children. 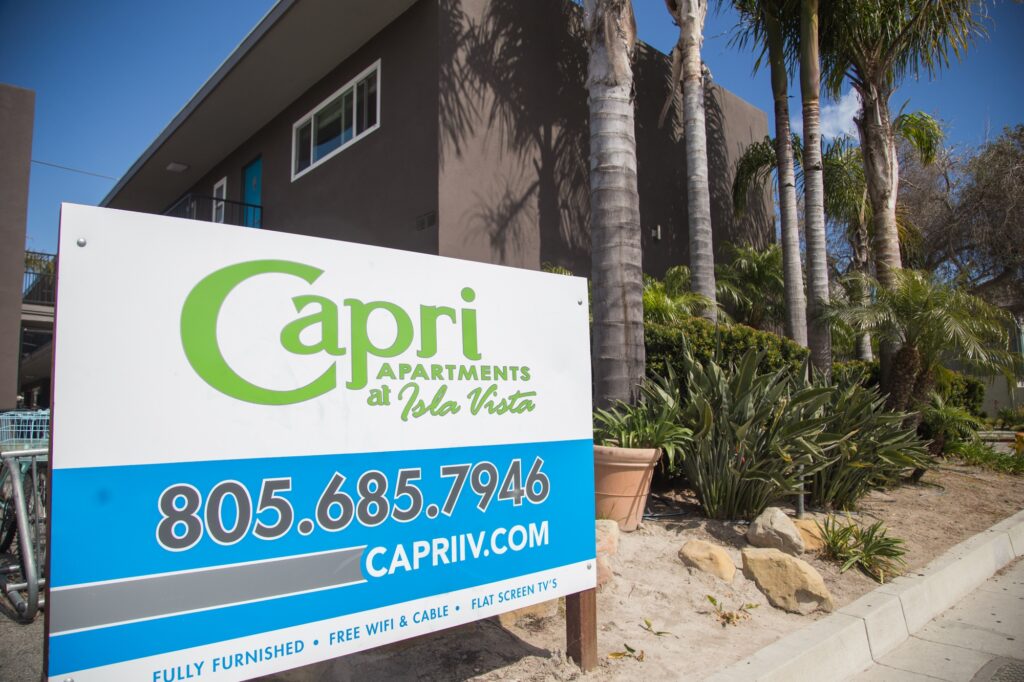 The parents of the victims of the Isla Vista shooting filed a lawsuit against the shooter’s apartment complex, Capri Apartments, in March 2015, claiming that the housing company was responsible for the wrongful death of their children. A court date has been set for Sept. 15 of this year. Jenny Luo/Daily Nexus

The parents of UC Santa Barbara students James Hong and David Wang — the shooter’s roommates — and their friend, George Chen, filed a wrongful death lawsuit in March 2015 against the Santa Barbara County Sheriff’s Department and Capri Apartments, arguing that their deaths could have been prevented.

While the Sheriff’s Department has been dropped from the lawsuit, Hi Desert Mobile Home Park L.P., the company that owns Capri Apartments, and Asset Campus Housing (ACH), a third-party student housing property management company, are still on the lawsuit and will face trial on Sept. 15.

The defendants submitted a motion to dismiss the lawsuit, but it was rejected this year on Feb. 10.

Becker Law Group and McNicholas & McNicholas, LLP, the two L.A.-based law firms representing the victims’ parents, claimed negligence and wrongful death against the two companies, which they believe should have properly vetted Elliot Rodger before assigning him to be Hong and Wang’s roommate.

According to court documents obtained by the Nexus, the parents’ original complaint against the two companies alleged Capri Apartments was warned Rodger was a “violent and dangerous threat to his roommates.”

Allegedly, the apartment company “had actual and constructive knowledge of his bizarre behavior,” yet still did not conduct a “reasonable investigation” before assigning him as Hong and Wang’s roommate.

“Plaintiffs are informed and believe that [the two companies], through their on-site management personnel, were aware that law enforcement officers had come to Apt. #7 due to a dispute between Rodger and his roommates,” according to the original 2015 complaint.

The complaint says as a result of the two companies’ “negligence,” Hong, Wang and Chen were “rendered completely vulnerable” to Rodger and “subjected to his violent acts, which caused their deaths.”

The families are suing for any psychological, emotional or physical pain caused by the deaths of the three victims and are seeking compensation as “the Court deems just and proper.”

“[The parents of Chen, Hong and Wang] have incurred funeral and burial expenses and suffered extreme and severe distress, pain, anguish and other economic and non-economic damages in an amount to be proven at trial,” according to court documents.

Hong and Wang were assigned to Apt. #7 at Capri Apartments of Seville Road in September 2013 despite several complaints from Rodger’s old roommates about his mental well-being.

In late 2011, Rodger was assigned two Hispanic male roommates who he said were “rowdy, inferior, pig-faced thugs,” according to his manifesto. Within days of meeting them, he insulted them and told them he was “superior,” according to court documents.

In September of 2011, Rodger was assigned a new roommate who, a few months later, “began to fear for his personal safety,” according to the complaint the parents’ lawyers filed.

According to the roommate’s complaint to the apartment complex, “Living with Eliot [sic] is like living with a ticking time bomb waiting to explode, and the only way to solve this problem is by removing it. We are at the point where I fear for my safety.”

The parents’ lawyers claim in a Feb. 10, 2017, court document that the three victims “simply would not have been killed” if the companies had complied with “basic industry standards and at a reasonable level of care.”

A representative from Capri Apartments said they were uncomfortable commenting on the case but could say “the management company has changed since 2014.”

Patrick McNicholas, partner of McNicholas & McNicholas, LLP, said “the apartment was completely lacking in training its onsite managers in issues of safety, on issues of matching roommates, in issues making sure that the roommates were safe.”

“The parents are very hopeful their children will not have died in vain,” he said.

“They’re moving forward with their lives, but they are beyond devastated,” he said.