The Daily Nexus
Sports
Gauchos Travel to Hawaii for Regular Season Finale
May 25, 2017 at 5:01 am by Kayla Talley 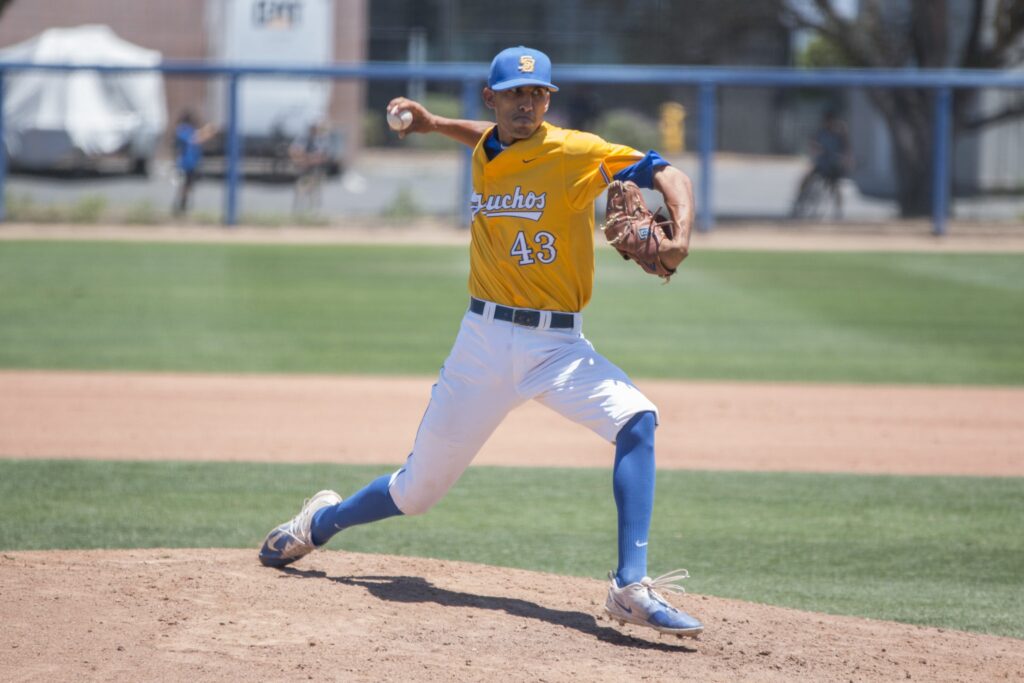 Right-handed pitcher Steven Ledesma took over for Liam Steigerwald at the top of the sixth. Stephen Manga/ Daily Nexus

The UCSB baseball team is approaching its final series of the regular season this weekend as it will face Hawaii at Les Murakami Stadium in Honolulu, starting Thursday at 9:30 p.m.

Cal Poly unfortunately swept the Gauchos in their last weekend at home, but Santa Barbara displayed great effort to bounce back on Tuesday, achieving an 11-2 win over USC in its home finale over USC, in which junior infielder Austin Bush recorded his 18th homer to tie Tyler Von Schell (2001) for the most single-season homeruns in UCSB history. The Gauchos will now head into the end portion of their 2017 campaign 23-30 overall and 7-14 in Big West play.

Hawaii has not been so hot as of late, having lost five-straight going into its final home stand. However, the Rainbow Warriors are sitting over the .500 mark with a 26-22 season record and are 8-13 in the conference standings, just one game ahead of the Gauchos, who sit in a three-way tie for last place with UC Riverside and UC Irvine.

Even if UCSB completes the sweep, it will finish under .500 for the first time in seven seasons and fall short of preseason Big West standing predictions, which saw the Gauchos tying for second place with Long Beach State come the end of May.

The Rainbow Warriors look ahead to break their five-game losing streak and defend the one-game conference lead they have over UCSB, but the Gauchos will absolutely be zealous to take the series and jump ahead of Hawaii in the final version of the Big West 2017 standings.

Bush not only leads every player in the Big West in home runs (18) and RBIs (54), but he also carries UCSB’s lineup by a landslide in these categories in addition to exhibiting a whopping .625 slugging percentage. This should come as a real threat to Hawaii’s pitching staff, as Bush also has the momentous ability to make Gaucho history across the pond with homer No. 19.

Junior utility Colton Burns is another notable member of the Gaucho’s offense, as he is leading the team with a .303 batting average and is the only player on UCSB’s squad surpassing .300 at the plate. Altogether, the Gauchos are batting .272.

Leading the Rainbow Warriors’ .267 team batting average is junior outfielder Dylan Vchulek, who is hitting .309 with 60 hits on the year. In addition, freshman infielder Dustin Demeter owns a team-leading 27 RBIs, and is second in batting average behind Vchulek at .297.

Hawaii has outscored its opponents 235-220 this season, sporting a 15-plus run differential, while UCSB is on the other end of the spectrum in this offensive category, having scored 281 runs to their opponents’ 307 for a run differential of -26.

Despite its negative differential, UCSB plates an average of about 5.3 runs per game, just above Hawaii’s 4.9 average runs per contest.

In terms of overall defense, the Rainbow Warriors’ pitching takes a significant lead with a shared earned run average of 3.54 to the Gauchos’ 5.28 ERA and a small edge in fielding with a percentage of .969 and 59 total errors in comparison to UCSB’s 66 errors for a minor difference in fielding percentage with .967.

When the ‘Chos and the ‘Bows met in the 2016 season, UCSB grabbed the series sweep at Caesar Uyesaka Stadium, but Hawaii still holds the 16-13 advantage in its past total meetings with the Gauchos.

With each game this weekend starting at 6:30 p.m. HST and 9:30 p.m. PST, those following from afar in California may have to settle in for a late night or wait until morning to read through all of the updates and box scores. However, these fairly even stats across the board call for a competitive matchup in the season’s final stride, and it might be worth staying up to see how everything will play out in real time.