The Daily Nexus
Sports
Deeper Than Hoops: Gabe Vincent Stands With UCSB
May 25, 2017 at 10:00 am by Sean White 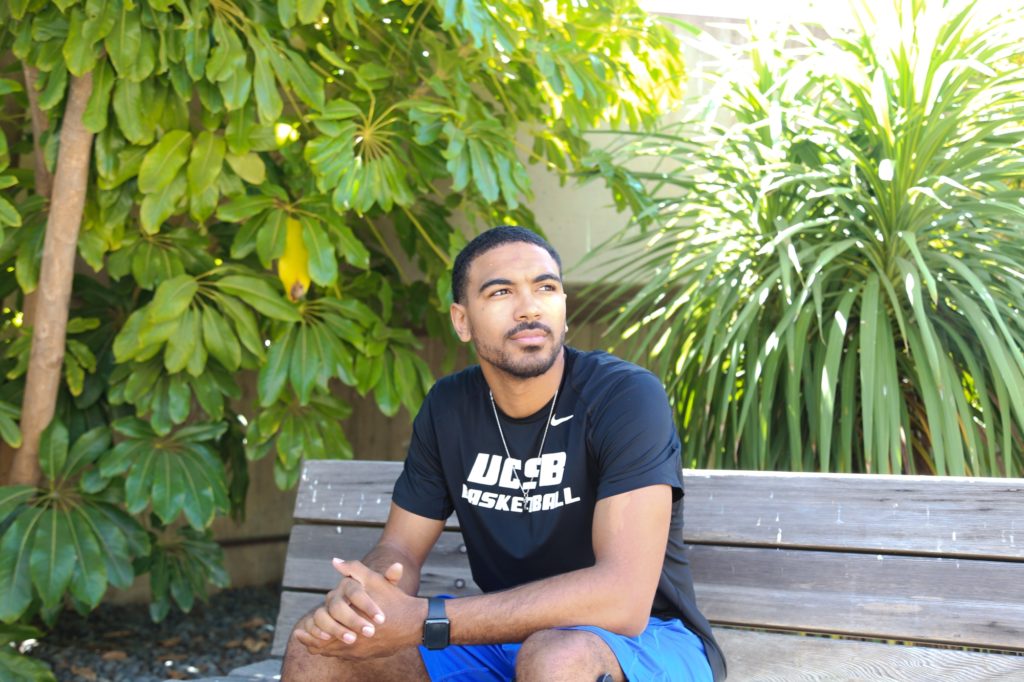 Earn scholarship offers, select the best system that caters to your style of play, then become a star of a collegiate program.

Those are the steps that people typically assume best sum up the transition of most student-athletes going from the high school to college ranks.

But much more goes into this process, including one of the biggest factors: life off the field or court.

These are the common misconceptions about life here at UCSB.

Overcoming, this false illusion has always been difficult, but the tragedy that occurred on May 23, 2014, was an unfortunate yet compelling reminder of the love and unity that reside within the UCSB community.

Prior to this date, preparing to graduate from St. Mary’s High School in Stockton, Calif., and having already verbally committed to the UCSB men’s basketball team back in Aug. 2013, current junior shooting guard Gabe Vincent seemed to have everything figured out.

But he, too, once shared uncertainty before this decision, yet his perspective was corrected as he was gradually integrated into the UCSB community.

“When I was in high school and people would bring up [UCSB], it started to get a bad reputation. Everybody knew it was a party school, but that’s kind of a two-sided coin. People like to party and have fun and go to school, but some people are discouraged by that,” Vincent explained. “I for sure was at first. When you think of UCSB, most of the time that’s what you think of. Yes, you get a great education, but that party scene over there might be too wild. [But] the more I came out and got involved with the community and saw what they were about and got more comfortable here, [I saw] that people are in the library 24/7, people are grinding, taking classes, and that’s just a way for them to let loose. The community is so small that people are all together; it allows everyone to enjoy life together, which is awesome because not many places can have that.”

As someone who had confirmed his love for basketball in the sixth grade and who was determined to put his all into the sport once he started playing at the AAU level, Vincent saw the advantages of UCSB’s location, beautiful women and Division I status, which seemed to provide an opportunity any prospective student-athlete would desire to seize.

But the potential to be the university’s next star player with such incentives at his fingertips took a backseat during his realization of UCSB’s ability to bond and unite after the tragic loss of innocent lives just a year before his official enrollment at the school.

“I came out here a lot, I took a few unofficial [visits] just to come see the guys practice. I had been out in I.V. and had seen that culture and kind of got accustomed to it to a point that it already felt like home. That was a big thing for me coming here because you have to be able to live somewhere when you’re not playing basketball, too,” Vincent said. “So when I heard the news about the shooting, that’s something that, even if you’re not attached to the school emotionally or physically, when you read that kind of tragedy, that hits your heart because that’s something that should never happen and is terrible to read or hear.”

“When you are attached to it, like we are now, and I kind of was in a way then, it definitely hit home. It was sad to hear; I remember I came out the following weekend because I was coming up on another unofficial [visit] to see the guys practice, and even they were down,” Vincent said. “Looking out to the streets of I.V., they were dead quiet, nobody was out. The whole community was mourning what had happened. That was eye-opening because it’s not just everybody out here for themselves. Even though there are cliques or groups, we are still one strong community. The way people came together for that was inspiring.”

Rather than be deterred from his choice to attend UCSB after such a horrific moment that made headlines nationwide, Vincent’s empathy influenced his newfound interpretation of such a unique community.

The foundation for this compassion comes from Vincent’s parents, Cynthia and Franklyn, who are both psychologists. Once quoted saying his upbringing was “different,” Vincent holds a perspective of this three-year anniversary that only he can understand.

“To me, honestly, psychology, even though there’s many facets of it, a lot of the times it’s just being able to read in-between the lines. A lot of people are going to put on a front or show this or that, but that might not be what they’re really feeling or showing,” Vincent said. “I think that plays a big role in terms of relating to people and being able to talk to them and gauge how a conversation will flow [to see if] they’re upset or figure out what they want to talk about; you can use [psychology] in so many different ways.”

“Seeing the guys and the community in that way, you could see it was genuine grief. People were really going through it and it was a struggle for everyone. Naturally, when that happens, you start thinking about yourself and how you could’ve done better. Even though you might have not been directly in the situation, you start to think, ‘Man, I could have done that differently,’ and that could’ve changed somebody else’s life in a positive way.Unfortunately it had to happen in that way, but I think it was eye-opening and some people made some changes.”

As a leader on this season’s team that included only one senior, the impact of the tragedy isn’t as evident. But, the fact that this year’s graduating class will be the last of the UCSB and Isla Vista communities that were in the areas during the incident is still very prevalent.

“I think there has been an unbelievable amount of support, with the blue lights and the awareness around campus. But I feel like as one generation comes and goes and [with] this senior class being the last [group] that were really here for it, I think that plays a major role in it kind of [being] forgotten, which I hope it doesn’t because I hope that community can stay strong,” Vincent said. “A lot of universities have four years in, four years out, and it’s almost like a new culture or new tradition. I hope that’s something that can stay alive, and hopefully, through the different support systems on campus, they can keep the community strong together and let them know that things can happen, it doesn’t matter where you are. There’s been many other instances at universities, and I think that it’s important to not keep these things relevant but on your mind.”

Whether or not time heals all wounds can only be determined by the individual. While the pain and disbelief of what took place on May 23, 2014, still causes grief for many, the recovery from this tragedy is still taking place and can be sustained with a communal effort.

“I think Isla Vista is a special place. It’s right on the beach, it’s right next to campus. It’s a great diverse group, and I think it’s important to keep in mind, especially with this class leaving, and we have some younger guys on the team [who are like] ‘It’s the anniversary of what?’ and you can already kind of see it becoming forgotten,” Vincent said. “I don’t think it’s anything to run away from, the history of that [event], because you can’t change time. [Embracing] that and keeping the discussion open, be willing to talk about it and let people know what happened. Obviously you don’t want history to repeat itself; that’s the last thing this community could need or want.”

It is really nice to read about a kid that has his head on straight.
The future looks brighter.