The Daily Nexus
Tennis
Changing the Culture: How Mays Helped Shape an Elite Tennis Program
May 18, 2017 at 5:10 am by Richard Benites

Many young athletes aspire to one day be able to play for a four-year university. Few, however, are able to compete on a national scale. Even fewer find themselves ranked within the best in the country. The case for Gauchos senior Morgan Mays is one of the few, for his talent proved to be more than enough to get him where he is today. 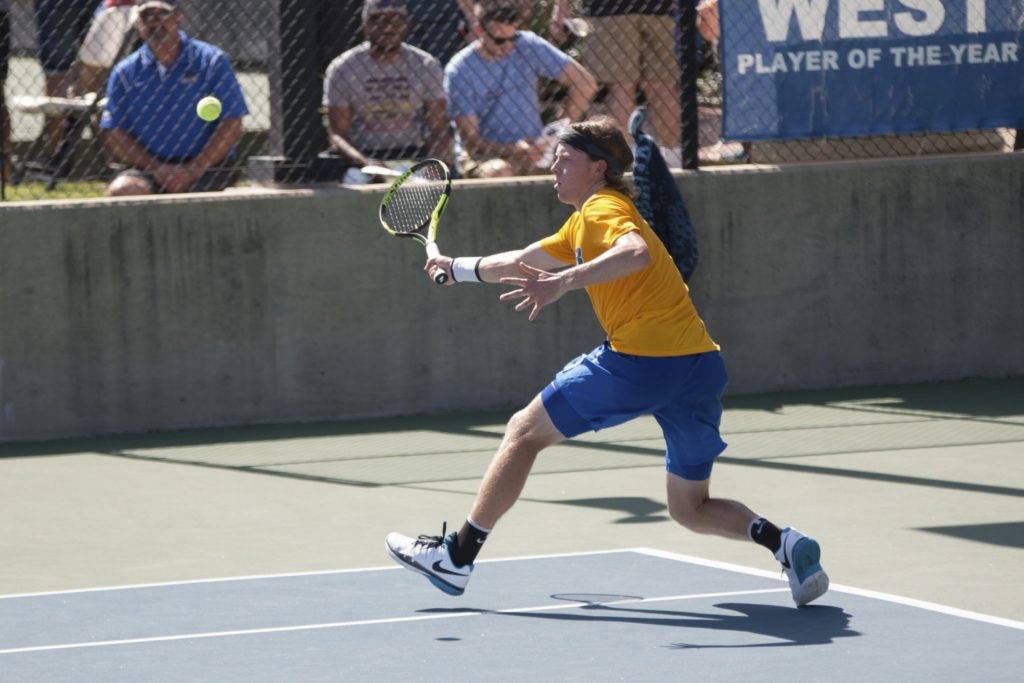 As a homegrown product, Mays grew up just an hour away from UCSB’s campus in Malibu, Calif. He played various sports growing up, but naturally he excelled most at tennis, enough so that his play began to be recognized on the International Tennis Federation junior rankings. He notes that his three consecutive ITF junior event victories were his most memorable sports moments and perhaps the turning point in his decision to take his craft to the next level.

“I always wanted to play at the college level,” Mays said when asked about his transition into college. “To play for a team and be a part of a group environment was my goal.” Fast forward a few years and Mays would go on to achieve that goal.

During his freshman year, Mays was recruited by Wake Forest University, whose team is currently ranked first in the nation according to the Intercollegiate Tennis Association standings. His time there, however, was short-lived, as he ultimately decided to transfer to UCSB.

“[Wake Forest] is a great school with a great tennis program, but I was looking for different opportunities like playing higher in the lineup — opportunities I would go on and receive here.”

A chance to prove himself, and the ability to return back to the West Coast were all Mays could’ve asked for as he arrived at UCSB during the 2014-15 season.

“When I came here I saw lots and lots of potential,” Mays said about his initial thoughts, “[and] a tight knit conference alongside an incredible coaching staff.”

Mays went on to reference Head Coach Marty Davis’s own collegiate career and his status as a top-40 overall player and top 10 in doubles play. Paired with Assistant Coach Blake Muller and his illustrious career at Stanford, the team was led by some of the greatest former talents.

“I was really excited when I got here … I saw everyone really intent on changing the culture here.” Mays mentioned because previous to the 2013 season, Santa Barbara was not yet the Big West powerhouse we see today. The team was also nonfactors at a national scale, with all of their recent NCAA Tournament appearances being cut short in the Round of 64 mark. Their last most successful showing came back in 1997 when UCSB was ranked No. 17 in the nation and reached the Sweet 16 stage of the competition. Since then, and from the turn of the century, the Gauchos haven’t really played at that same sense of quality.

During his junior year, Mays first began to see himself consistently lead the pack at the roster’s court one spot. He also became captain for the first time as an upperclassman.

“It was another opportunity I looked very much forward to; [captaining] is a position of high responsibility and it meant that much more considering we were coming off a great year since we had won the Big West title,” he said.

Mays followed this up by making the point that, early on, every season the team wanted to see exactly where they’d stack up in the conference; however, their expectations began to involve a pursuit of placement onto the ITA rankings. That same year, Mays posted a 17-11 singles record and a 13-9 in dual play, which earned him an All-Conference First Team Singles selection and an Honorable Mention in Doubles. The team went on to qualify as their conference’s first seed and claimed back to back Big West championships. “

Starting last year, with the bringing in of newer and younger faces, was when I saw the tennis program’s culture first begin to change,” Mays said.

Mays was referring to standout names like sophomores Anders Holm and Nicolas Moreno, as well as his doubles co-star junior Simon Freund. The identity of UCSB’s tennis program truly started to emerge as they began to set their goals high with a conference three-peat and potential upsets versus opposing top-tier programs.

As this season’s campaign began to wind down, the accolades and record breaking began to pour in. UCSB’s late calendar win streak of 12 in a row handed them another Big West first seed which ultimately resulted in both a league and playoff clean sweep, granting the program their championship trifecta. Their overall season record of 19-6 had them at a .760 win percentage, which is the highest in franchise history and earned them the No. 37 ITA ranking. This national ranking finish also ended up being the program’s third-ever highest spot, with only the 1997 and 1998 teams both finishing top 25 in the nation.

“This was the first time in a while that people started to notice us on a national stage … we faced four different top-10 teams in the early part of the season and managed a great performance against all of them,” he said.

All in all, Morgan Mays was once again elected to the All-Conference First Team and even announced as the Big West Player of the Year. Davis also earned 2017’s Coach of the Year recognition. Regionally speaking, ITA also honored Mays with the Arthur Ashe Leadership and Sportsmanship Award and Muller as Assistant Coach of the Year.

“Altogether it’s been an incredible year, I’m proud and I really believe the culture has shifted upwards from here. I truly think this program will excel and continue to win titles for years to come … all thanks to Marty and Blake, we all hope this mentality will keep growing.”

Much praise can be passed on to the UCSB men’s tennis team, but there’s still more work left to be done. As for now, fans and Gauchos alike can surely be excited for more years of tennis court dominance thanks to a stellar youth core and a phenomenal coaching staff.