The Daily Nexus
Sports
3rd Inning Blues: Gauchos Give up 8 Runs in 3rd Inning, Lose 4th Conference Rubber Match of the Season
May 14, 2017 at 8:58 pm by F.P. Santangelo Jr 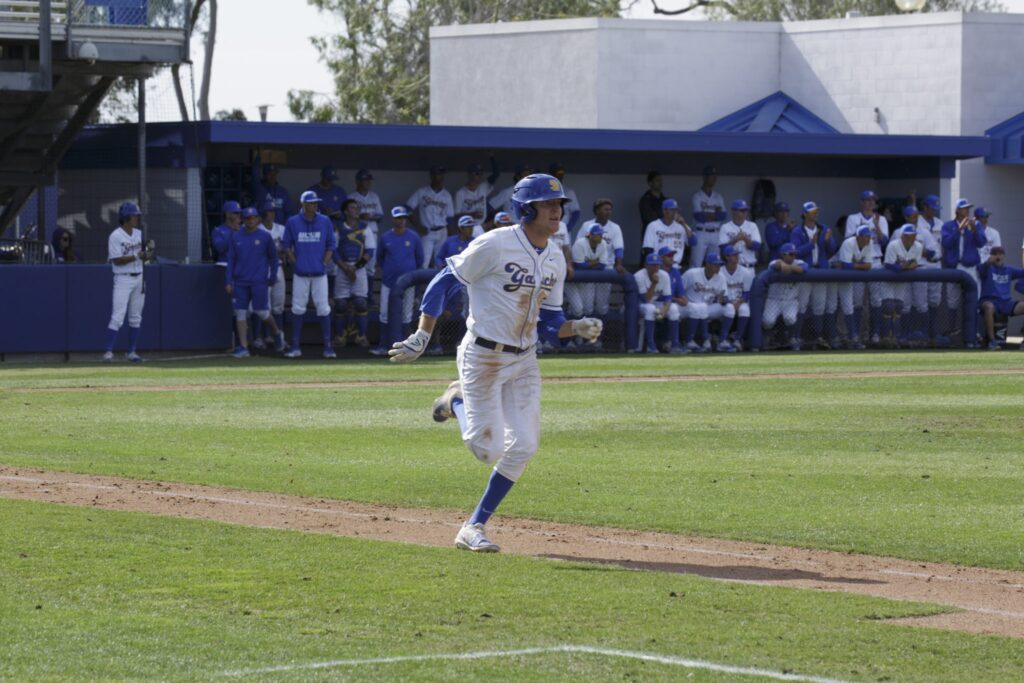 Everything that could go wrong, did go wrong Sunday afternoon for the UCSB baseball team. After defeating Cal St. Fullerton Saturday night by a score of 6 to 3 to even the series, Santa Barbara would lose the deciding game of the series by a score of 12 to 3.

True freshman Chris Lincoln took the bump for the ‘Chos on Sunday for his third start of the season while Colton Eastman came off the D.L. to pitch for the Titans. Sunday was the first time Fullerton ace Eastman has thrown since February 21st in a start against UNLV.  Eastman pitched well enough, but the Titan hurler did show some rust.  Being on an understandably short leash, Eastman would throw 2.2 innings giving up two hits, one earned run, while walking two.

The young UCSB right-hander, Lincoln, had control issues Sunday afternoon. Lincoln would also go 2.2 innings, but not because of a short leash. The pitch count rose quickly for Lincoln as he could not find the zone. The stuff was there showing a 90 to 91 mph fastball and good movement on both his slider and changeup, but most pitches would miss low or in the dirt.

Lincoln would be a part of a rough third inning that would be a huge part in deciding the game early in favor of the home team. After getting two out in the bottom of the third, Lincoln would give up a dead-center two-run shot to Titan first baseman Taylor Bryant. After walking Timmy Richards, the Gauchos would go to their bullpen early.

RHP Steven Ledesma, who has been lights out as of late before coming into Sunday’s matchup, was put in. After throwing 1.1 innings Friday and .2 innings Saturday, the transfer junior from Santa Barbara City College was noticeably tired while warming up only hovering around 85 to 86 mph with his fastball, a mark 2 to 3 mph lower than usual for the righty.

As a result of fatigue, Ledesma got teed off on. Hunter Cullen would hit a bases-clearing triple to left center scoring two. The next batter Chris Hudgins would continue with a two-run shot to left field scoring two more.

After a Chris Prescott single, Scott Hurst would hit another home run to right field adding yet two more runs for the Titans. Ledesma would not last the inning after giving up six runs from five batters. Ben Brecht would come in and finish the inning one batter later. The Titans would score eight two-out runs via a triple and three home runs in the bottom of the 3rd.

Offensively, the Gauchos would score three runs, but had opportunity after opportunity to score and make the game interesting. UCSB bats would leave the bases loaded scoring no runs on two separate occasions with one out. Even worse, the Gauchos were 0 for 5 with runners on 2nd and 3rd in the game. Although Kenny Corey would go 3 for 4, he would never be up with runners in scoring position resulting in no RBIS for the Gaucho 3rd baseman.

Two more home runs and a triple would come again later in the game for the Titans resulting in the final score of 12 to 3. In total, even though collecting 14 hits, all runs produced for the Titans came on the five home runs and two triples given up. In the route, Lincoln (1-3) would get the loss.

The Gauchos will try to move on from the beat down and face the Trojans at the USC Wednesday night at 6 p.m. With using five arms including the usual midweek starter in Brecht Sunday, it will be interesting to see who the Gauchos will have left to throw considering a big Cal Poly series on the horizon at the end of the week.