The Daily Nexus
Music
Old Crow Medicine Show Plays Classics for Granada
May 11, 2017 at 5:05 am by Isaac Mikulski

The Granada Theatre awoke to the Americana group Old Crow Medicine Show’s enthusiastic pounding of snare and bass drums to kick off their tribute to Bob Dylan’s renowned album, Blonde on Blonde. This year marks the 1966 double-album’s 50th anniversary, which Old Crow Medicine Show observed by putting their own unique spin on each of its songs. The band felt a special kinship to the record, as it was recorded in their hometown of Nashville, Tenn., as well as to Dylan, with whom they collaborated to compose their hit single, “Wagon Wheel.” What’s more, the group’s album recording of their live performance of Dylan’s famous album was published by Columbia Records, the very same company that published Dylan’s original record 50 years prior. All of these links between Dylan and Old Crow Medicine Show were certainly evident in their performance, though they did not let the style of the original record constrain them to being mere imitators of Dylan; they imbued his work with their unique, often lively musical style.

The group continued from Blonde on Blonde’s first track, “Rainy Day Women #12 & 35,” to a very upbeat take on “Pledging My Time.” With this piece, they took Dylan’s march-like tune and made it more rapid with instruments such as the violin, guitar, upright bass and banjo. The band’s lead singer, Ketch Secor, went on to praise Santa Barbara, noting that he was glad to be back here and admitting good-naturedly that the city is much better than their native Nashville. The group then continued to play, all the while maintaining a comfy aesthetic of circular-brimmed hats — which Dylan is fond of himself — and the well-known Nashville music scene.

A handful of the pieces that followed maintained a closer obedience to Dylan’s originals (such as “Visions of Johanna” and “Just Like a Woman”), but nonetheless kept the band’s unique sound. Their unrestrained usage of drums and upright bass yielded a bouncier and quicker style than Dylan’s, which prompted many of the songs to give an entirely different experience. Interestingly, in this they stayed true to Dylan.

Audience member Chuck Flacks commented, “Dylan himself was always reinterpreting his own songs … so they certainly were in the spirit of Dylan.” 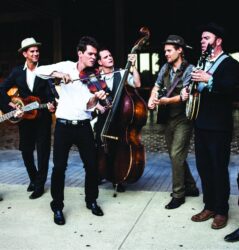 In addition, the multitalented members of the group often switched instruments, and some instruments — like the harmonica — were brought in on some pieces and not others, which made the event a truly diverse collection of music. A couple of the tunes were sung by members of the band other than Secor. For instance, Critter Fuqua took over for “One of Us Must Know (Sooner or Later)” as well as “I Want You.” For the latter of these, Critter elaborated on the country aesthetic the group felt the original had, yielding an almost completely different tune. However, perhaps the most exciting change in primary vocalist was when Kevin Hayes took the microphone for his interpretation of “Leopard-Skin Pill-Box Hat.”

For this piece, Hayes gripped a wireless microphone and memorably danced and shimmied across the stage. He may have been the most active member to sing the lead vocals, and he created an extremely cheerful experience for the audience. With his quick, passionate movements, he physically expressed the lively sound of nearly all of the group’s pieces. In fact, all of the members were completely immersed in their performance; Secor’s face trembled with the passion of the lyrics his sung, for example.

“Leopard-Skin Pill-Box Hat” signaled a new wave of intense enthusiasm among the audience. After “Just Like a Woman,” which Secor termed a “California-type song,” the theater erupted in applause and cheering, and the final two songs kept the entire audience standing, swaying and grooving to the music. Old Crow Medicine Show’s take on Blonde on Blonde went out with a bang, and the band members were introduced and bowed. The fervent excitement was carried even further, however, by the two-song encore.

After the group was welcomed back to stage by the well-pleased audience, they encircled a microphone to perform a cover of one of Dylan’s most famous hits, “Knockin’ on Heaven’s Door.” This final piece of Dylan’s was carried out slowly and was powerfully accompanied by the unanimous singing of the audience. Finally, the group closed with their hit, “Wagon Wheel,” to which Secor acknowledged Dylan’s collaboration, “with about 40 years between the pen strokes.” The audience was filled with passion, and all moved around with the music. Toward the end of the song, the band stopped singing the chorus so the crowd could take over. Each member sung with fervor, and the group joined back in. The band ended the song amidst dancing, cheering and applause. The evening thus paid a more than fitting tribute to Bob Dylan’s monumental Blonde on Blonde, both through new interpretations of his songs and expressions of his importance for Old Crow Medicine Show.