Long story short: “Guardians of the Galaxy” was alright. While I commend Marvel’s efforts to introduce unknown superheroes to a wider audience, the film still fell into the standard, stale Marvel Cinematic Universe (MCU) formula, once you remove the 80s, “Star Wars” vibe to it. (The movie was basically “The Avengers” in space, without prior “set-up movies.”) Nevertheless, the film was also so fun and bizarre, out of all the MCU movies, that I basically assured people that, if handled well, “Guardians of the Galaxy Vol. 2” could break away from the MCU’s typical mold.

Unfortunately, this follow-up was still plagued by standard problems of the MCU. Information was basically spelled out to the audience without any chance for them to connect the dots. In some scenes, information, whether it was audio or visual, was repeated to — I guess — make the scene more emotional, when it actually made it repetitive. There were moments when the music or actors’ expressions could have easily conveyed everything, but the characters just explained it after I understood what they meant or felt. It’s like writer-director James Gunn (or some studio executive at Disney) didn’t think that it was enough for the actors to communicate the information, so lines were written in to reinforce the emotion.

The film also felt incohesive and clunky. An advantage the original “Guardians of the Galaxy” had is that the completely generic MCU plot at least ran at a consistent pace. Here, the sequel aimlessly meandered for a while until it finally started to pick up near the hour mark (that’s an estimate, though, because you really don’t feel the pace at all). After the climax, it lost too much steam because it went on longer than probably necessary. And, while I liked the general area in which the film ended, I feel as if there should have still been some closure, as it ended in an abrupt manner.

To be honest, this movie felt like Marvel’s “Return of the Jedi,” because while the structure and other weaknesses certainly weighed it down, it also contained some of the best elements of the MCU overall.

Even though I believed that most of the main characters did not undergo the most critical development possible, Gunn made up for it with Yondu. Michael Rooker put all of his emotion and dedication into this performance to create a solid arc for his character. The movie devoted some time to interact and form connections with the different guardians of the galaxy. We actually got to spend time seeing Rooker’s emotional conflict and the ways in which he handles it. By the end of the movie, his arc felt complete and satisfying. In a film with five main characters, the one you end up empathizing with the most is one of the side characters. 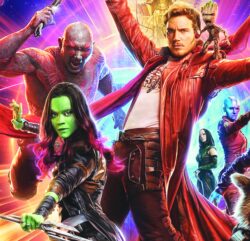 As I was watching the movie, I kept thinking about how great the marketing ended up being for this film. Even though I heard about one character’s role in the comics, the trailers and posters led me to believe that Gunn was giving his own interpretation of the character that fit in the context of the film. As the plot unfolded, however, the movie completely subverted my expectations. For the first time since “Captain America: The Winter Soldier,” I was completely taken off guard by one of the MCU’s movies.

Fortunately, this was not the only factor that indicated to me that this movie had strong elements to it because the villain was actually decent. One could tell that Gunn most likely restrained himself when writing this movie, as he made it feel more small-scale and (thankfully) did not integrate Infinity Stones or any other broad MCU plot device into the plot. This proved beneficial because the movie did not rely on anything seen (even if it was for one frame) in past MCU installments to make the movie stronger. Also, while the villain’s motivation was external (in fact, you see it affecting other people), the plot’s central conflict was fixed between the guardians of the galaxy and the villain. In fact, while “Awesome Mix Vol. 2” did not play as big of a role, the song chosen to play during one instance of this conflict heightened my emotional response to that scene overall, as the heroes were already given a drive to want to defeat the villain.

Because of this change of pace, I could feel this film trying to break away from the MCU formula, as it, at the very least, still felt strong if taken out of context from the cinematic universe. While the first movie had more flow, this sequel felt more daring. Even though its plot did meander before kicking into motion, this sequel did not feel like it was stalling for time until the release of the new Avengers movie, “Infinity War.” Instead, it focused on a specific storyline for the remainder of the film. Additionally, the best part of this movie is that it still had a specific function in the larger MCU story, despite feeling so distant from it.

This is a case in which the amount of positive elements outweighed the negatives and gave the movie a pretty good final result. Even though we are deep into the hold of the MCU, “Guardians of the Galaxy Vol. 2” felt like a much-needed breath of fresh air. Though I found this film to be uneven and overly simplified at times, I also believe Gunn tried his hardest to distinguish it from the rest of the MCU. I just hope that “Spiderman: Homecoming” and “Thor: Ragnarok” try to break the Marvel formula when they arrive later this year.

All of the exposition in this movie weighed it down like a hunk of lead tied to its ankle.