The Daily Nexus
Sports
Gauchos Face Red-Hot Cal State Fullerton in Last Series of the Season
May 11, 2017 at 5:01 am by Omar Hernandez 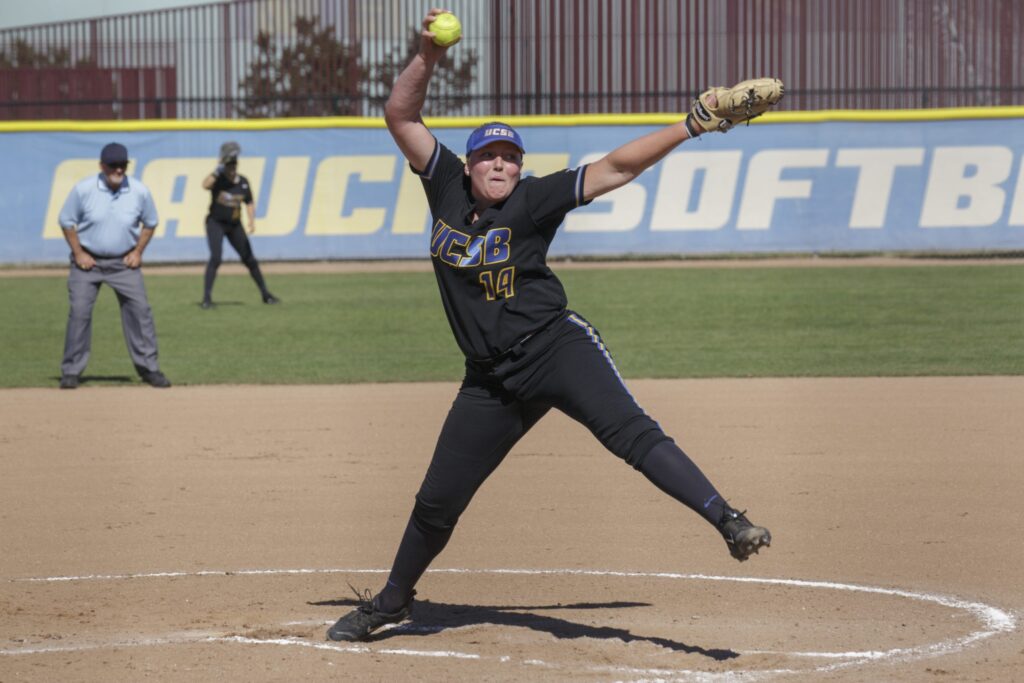 The final three games of the UCSB softball campaign are going to be far from easy. After dropping four of their last six, the Gauchos now face off against a CSU Fullerton team that has won nine in a row and 12 of its last 13.

UCSB enters the series with a 29-25, 9-9 conference record and currently sits in fourth place in the Big West standings. It will celebrate four Gauchos for Senior Day. The Titans lead the Big West with a 32-19, 15-3 conference record.Fullerton is coming off clinching its second-straight Big West Conference title in its series sweep of CSUN over the past weekend.

Fullerton is coming off clinching its second-straight Big West Conference title in its series sweep of CSUN over the past weekend.

Looking ahead, one aspect of the game that the Gauchos will need to improve on is maximizing their efficiency on the offensive end. The last series, they had two games of more than eight hits each with a total of two runs combined, as oftentimes base runners were left stranded in scoring position.

Against a team like Fullerton, whose pitching staff has a combined 2.55 ERA and is led by senior Kelsey Kessler’s (19-6) incredible 1.39 ERA, leaving runs on the table is not an option, as opportunities to score will be few and far between.

Kessler earned her third consecutive Big West Pitcher of the Week in the Titans’ outright claiming of the conference title. Prior to allowing a run in the second inning in Game 1 of the series against the Matadors, she had a streak of 32 straight scoreless innings in her complete game pitching performance.

When at the plate, part of the difficulties UCSB has had with putting runs on the board has been the lack of production over the last two series from two of its best hitters: Jessica Johnston and Sierra Altmeyer.

They went a combined 0-for-14 in the Gauchos’ two losses to UC Davis, with the sole victory in the series being powered by Johnston’s three RBIs. Although these last two series were most likely a fluke for these two, seeing as overall they have both put together two of the best individual seasons in the conference, it surely isn’t the way they want to end the year.

Others throughout the lineup have stepped up, but UCSB is going to need production from their third-spot and cleanup hitter if it’s going to have a chance in this series.

Even with their offensive struggles, the Gauchos still have a statistically better offense than the Titans coming into the game. Yet, this does not mean that the Santa Barbara pitching staff can overlook Fullerton despite the team’s numbers not being that impressive; the Titans certainly have some great offensive players.

One of those players is infielder Lexi Gonzalez. The senior leads the Titans in doubles (9), home runs (10) and RBIs (39) and is second on the team in triples (1) and hits (48). She had three RBIs and five runs in the last series alone, and it is going to be up to the Gauchos to find a way to stop her.

UCSB will be looking for redemption on the defensive end in this series, as it has not really performed up to its usual standards lately.

Santa Barbara’s last loss came at the hands of four unearned runs, and against a Titan team that has lost only three conference matchups this year, the margin of error is going to be that much slimmer.

However, one bright spot recently through all this was freshman Lena Mayer’s (3-1) great pitching performance against UC Davis, during which she pitched a complete game and only gave up one run. Hopefully, the Gauchos build off of that game and bring that same energy and control into this series.

Although first place is out of reach for UCSB, this series gives the Gauchos an opportunity to showcase their talent against the top team in the Big West and possibly get up to second place.

Fullerton is going to be a tough opponent, but if the Gauchos get back to their usual offensive groove and the pitching staff steps up in a big way, then there is no reason that they can’t take this series.

Overall, this season has been a huge success for the UCSB softball team, as it has put together one the best offenses in the Big West and has had solid contributions from all of its pitchers. Now the Gauchos can go out one last time and make sure that the rankings show that.

First pitch between UCSB and Cal State Fullerton is Friday, May 12, at 3 p.m. Saturday’s doubleheader will take place at 1 p.m. and 3 p.m. The series will be played at Campus Diamond.