After weeks of competing for thousands of dollars, graduate student Leah Foltz successfully explained her research on curing blindness with skin cells to win the People’s Choice Award at the annual UC Grad Slam on Thursday.

Grad Slam is a competition between UC graduate students to test competitors’ abilities to explain the potential real world impact of their research, a challenge and critical skill for many scientists and scholars who hope to engage the nonacademic public.

Foltz, a graduate student in UCSB’s biomolecular science and engineering program, said while thesis dissertations and research publications are vital for graduate school, it is important to be able to convey research projects to the larger community. 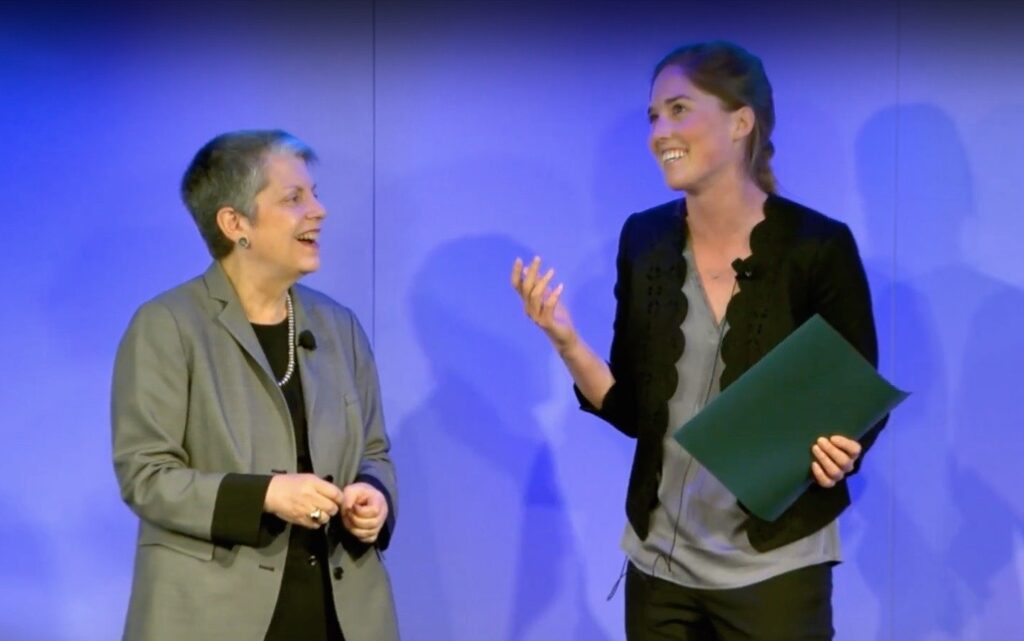 Leah Foltz (right) garnered the most audience votes on Thursday to win the People’s Choice Award at the annual UC Grad Slam. Courtesy of UC Office of the President.

“Research serves no point if you can’t get the community and people who are going to fund you to understand what you’re doing,” Foltz said.

Foltz was the first to present on Thursday and used two minutes and 30 seconds out of the three minutes allotted to her, winning the People’s Choice Award by way of audience approval.

The judges picked Leslie Rith-Najarian from UCLA as winner for her talk on making mental health more engaging and accessible, John Felts from UCSC as second place for his talk on transforming shrimp shells into surfboards and Geoff Hollet from UCSD as third place for his talk on using geometry to build better birth control.

Foltz’s Grad Slam presentation focused on her research about creating stem cells from patients’ skin cells and using those stem cells to create living eye tissue. That eye tissue could one day then be used to cure genetic blindness, she said.

Foltz said transplanting organs made from a patient’s own cells could have tremendous value for the medical field, as these organs have a much better chance of being accepted by the patient’s immune system.

Foltz’s research is not limited to blindness, she said, and could be used to treat a variety of other diseases.

“There’s no limit to what diseases can be treated with stem cell therapy, almost no limit,” she said.

According to Foltz, this technology could someday be used to cure diabetes or Parkinson’s disease and could be used in agriculture to design food that preserves its freshness for longer periods of time.

Foltz met with Congressman Salud Carbajal on Monday and was able to use her Grad Slam presentation to help explain the importance of biomedical research at UCSB.

Though the research is promising, Foltz said more funding is required to continue the work to make the research less expensive and more accessible.

Foltz said, however, the proposed cuts to scientific and medical research in the federal budget may hinder future projects.

“Federal funding is not guaranteed in the future, with the current administration, and the more that people can make research and its importance understandable to those that control that funding, the better,” she said.