The Daily Nexus
Sports
Gauchos Fall Short in Pivotal Home Series Against UC Davis
May 8, 2017 at 5:00 am by Omar Hernandez

UCSB came into this past weekend’s UC Davis matchup desperately needing at the very least a series victory to keep their Big West first place dreams alive. Instead, the last place Aggies were able to capitalize on great pitching performances and stole two out of three in Gaucho territory. 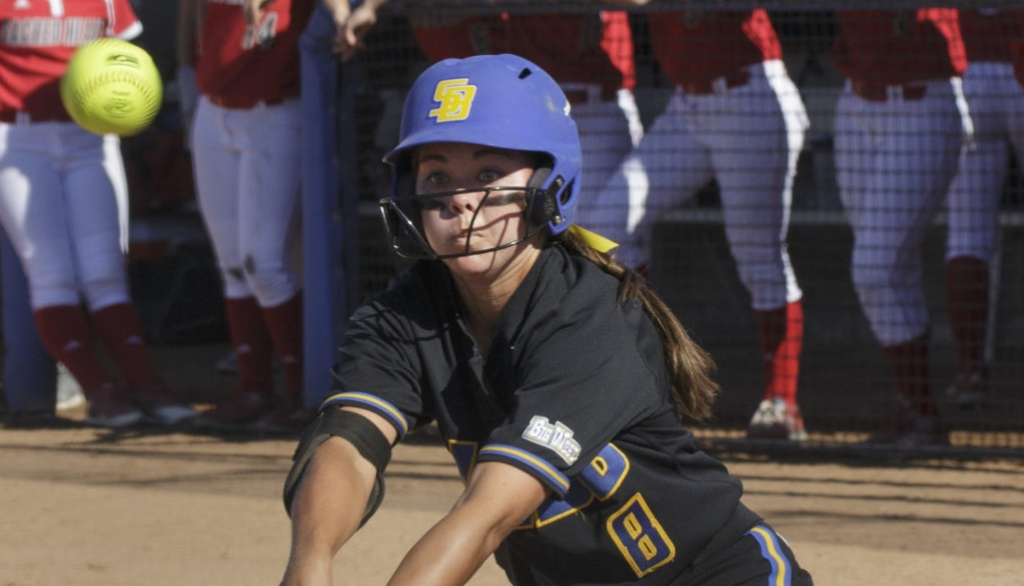 The Gauchos dropped to 29-25, 9-9 in conference play following its series defeat, while UC Davis rose to a tie for last place in the Big West with a 22-31, 7-13 conference record.

Friday’s game was a tale of extremes, as the Aggies scored as many runs as the Gauchos had hits en route to a 7-0 route.

Veronika Gulvin (17-13), usually UCSB’s most solid pitcher, gave up four runs and was eventually pulled from the game in the fourth inning. The great hitting of Davis third baseman Ashley Lotoszynski certainly contributed to this early substitution, as she got both a homerun and triple to go along with her two RBIs on the day.

Gulvin’s replacement Ashley Wright (4-3) fared a little better, with only one run earned on her part, however defensive mishaps amplified what was already a good offensive outing from UC Davis.

Along with inconsistencies on the mound, the Gauchos offense was unable to get things going in during the game. Only two hitters, Kristen Clark and Stacy Cavazos, were able to get multiple hits this game as usual offensive stalwarts Jessica Johnston and Sierra Altmeyer both went hitless.

A big part of this was great pitching by freshman Katie Kibby (14-8), who leads the Aggies pitching staff with a 3.08 ERA. While she did give up seven hits, her ability to stifle any offensive outburst before they manifested into runs was what led to this shutout victory.

UCSB tied the series up with a 3-1 victory on Saturday in the first game of a doubleheader. Right fielder Jessica Johnston led the Gauchos with two hits and three RBIs to account for all three of UCSB’s runs in the game. The offense as a whole was a bit muddled as only two other hitters even got a hit in the game. Much credit was due for Davis’ pitcher Andrea Reynolds (6-16) for that as even though she go the loss she pitched a great game only giving up four hits to what is considered one of the best offenses in the Big West.

On the other hand, junior pitcher Lena Mayer turned in a great pitching outing and got the win to show for it. Her game was very similar to Kibby’s in the game before, although she gave up seven hits she was able to stay composed and only give up one run. Mayer did a great job of limiting the Aggies’ most potent offensive threats, as their 1-5 hitters weren’t able to get even a single hit off of her.

The sole RBI for UC Davis belonged to freshman Marissa Jauregui in the top of the second, who hit a single to score senior Brianna Warner, but other than that it was smooth sailing for the Gauchos in their first win in the series.

The smooth sailing turned into choppy waters pretty quickly however as the Aggies handed UCSB the series loss in the second end of the doubleheader on Saturday. Again the Gauchos offense did not rise to the occasion as they only put two runs on the board even after getting eight hits. While Katie Kibby didn’t shut UCSB out this time, she again did a great job minimizing the offense’s efficiency just enough to give UC Davis the upper hand.

Defensively the Gauchos left much to be desired as none of the four runs put up by Davis were earned by Gulvin. Errors and a fielder’s choice helped nudge the Aggies offense in front, and in a game where again UCSB’s best hitters didn’t get a single hit near-perfection was needed out of the defense. The one bright spot was that the offense was definitely able to make contact, with four Gauchos having two-hit games, but other than that this game didn’t have too many positives.

UCSB is no longer in competition for first place in the Big West, however the next series against current leaders CSU Fullerton will give the Gauchos a chance to move up in the rankings and show that they have first place talent.

The key to finishing off the year strong will have to be taking advantage of having runners on base and maximizing their offensive efficiency, basically getting back to what they had done so well this whole year. If they are able to do that in their final games of the season then regardless of ranking they will have proven that UCSB is hands down one of the deadliest teams in the Big West.