The Daily Nexus
News
A.S. Publications Renamed After Staff Member Who Passed Away
May 8, 2017 at 5:30 pm by Jose Ochoa 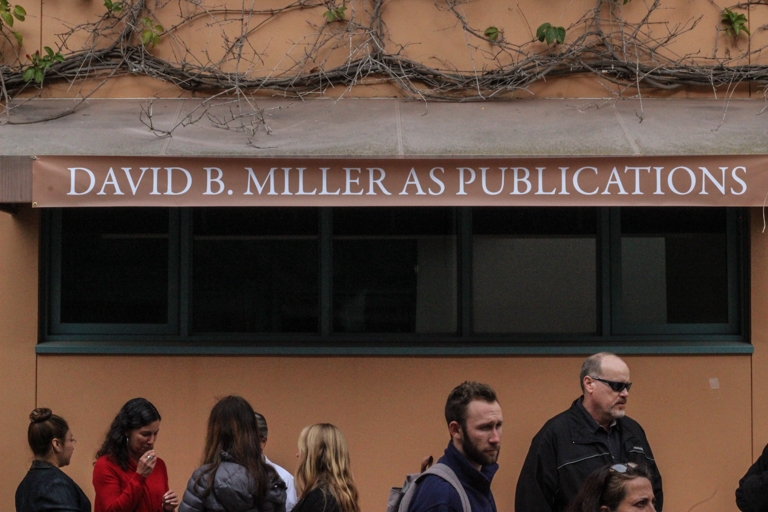 The A.S.-owned print shop has been officially renamed “David B. Miller A.S. Publications,” as of Friday. Jose Ochoa / Daily Nexus

Over 50 staff and students gathered outside of Corwin Pavilion on Friday to rename the print shop after David Miller, a UC Santa Barbara staff member who died in March.

Miller worked as assistant publications coordinator at Associated Students Publications, the A.S.-owned print shop near Corwin Pavilion. On April 12, the A.S. Senate passed a resolution to rename the shop “David B. Miller A.S. Publications,” in honor of Miller and his “wonderful work ethic.”

According to Kathleen Versola, Miller’s coworker since he began working with A.S., a frame with Miller’s photo will be permanently placed in his old office. The frame has the words “Never above you. Never below you. Always beside you.” alongside a copy of the resolution that renamed the shop and a photo of Miller.

The bill praises Miller’s work with students and the help he provided “by managing a service that made obtaining an education more affordable.”

Miller compiled, designed and printed student course readers, and he partnered with A.S. President Austin Hechler in a project to make course readers more affordable by printing through A.S. rather than outside services.

Hechler spoke at the memorial, saying Miller was at times more passionate about the project than he was.

Hellier-Tinoco said working with Miller was one of her “joys” and that she always looked forward to collaborating with him because of how dedicated he was.

Miller is survived by his wife and two children, who were also present at the memorial.

The new banner with the words “David B. Miller A.S. Publications” can be found in front of Corwin Pavilion, next to the A.S. Ticket Office.