The Daily Nexus
Sports
UCSB Hoping To Regain its Focus in Home Return, Will Host UCD
May 4, 2017 at 5:01 am by Calvin Thrift

Following its series defeat against Hawaii last weekend, the UCSB softball team will look to get back on track this weekend in its return home to face Big West counterpart UC Davis. 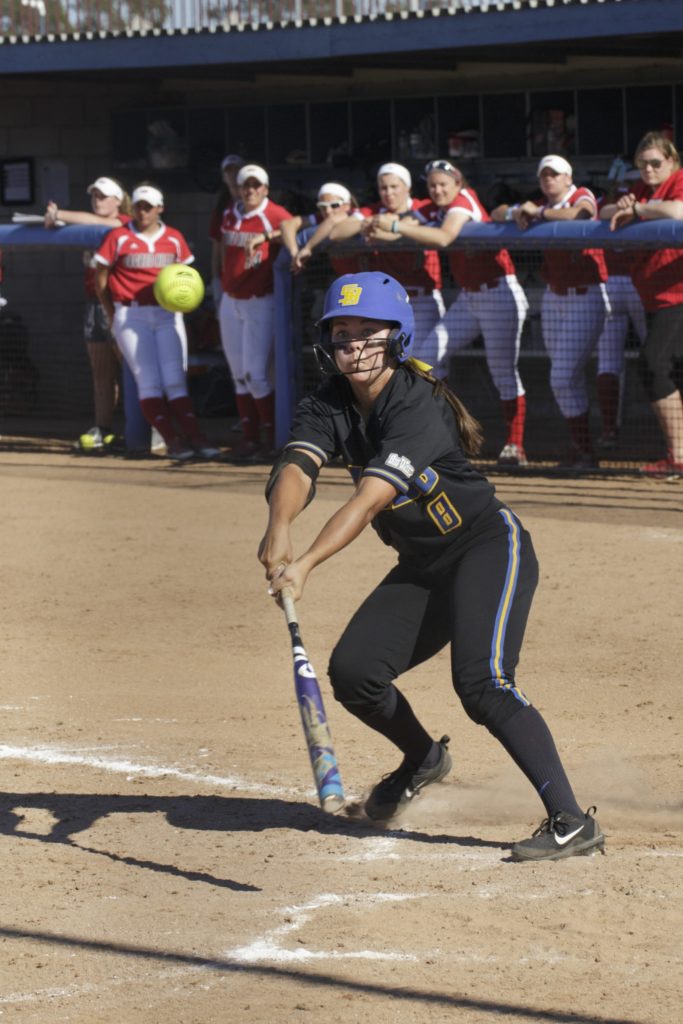 Kristen Clark watches as the ball flies down the base line. Dustin Harris / Daily Nexus

Following the snap of their three-series winning streak, the Gauchos own a 28-23 overall record and are 8-7 in conference play. Meanwhile, the Aggies are coming in at 19-29 and are sitting in last place in the Big West with a 4-11 league record.

Santa Barbara will be returning home to host the Aggies after playing its past two series on the road at Long Beach and Hawaii. Prior to having its streak of three consecutive series victories snapped by Hawaii, Santa Barbara had won nine of its last 13 games before dropping the Hawaii series.

As the regular season prepares to conclude, it can be judged that UC Davis has had an underwhelming campaign, having lost each of its conference series. The Aggies have lost eight games out of their last 10, with the most recent disappointment being a series loss at Cal Poly.

With the Gauchos trying to regain footing after being outscored by Hawaii by a deficit of 16-7, the struggling UC Davis team presents an opportunity to build up confidence again.

Despite the low hit total, hitting hasn’t actually been the primary cause for concern for UCSB as of late, as it registered 23 total hits in its previous series.

The Gauchos’ biggest concern seemed to simply be transferring those hits into runs. This is easier said than done, but the Aggies will likely face an ambitious Santa Barbara team looking to keep up its hit count and hopefully capitalize with runners on base to increase the amount of runs scored.

Heading into the start of the series Friday, Santa Barbara holds the offensive advantage over UC Davis, leading the Aggies overall as a team in runs, hits, home runs and RBIs with a collective .283 batting average, which trumps the Aggies’ average of .261.

For the Gauchos, infielder Sierra Altmeyer has been a large part of their success this season. Holding down second base, the sophomore leads her team in batting percentage with a .382 clip on the year and is also one of her teams’ biggest power hitters while slugging .674.

Altmeyer has nine home runs to go with an impressive 31 RBIs and 55 hits. Junior outfielder Jessica Johnston has been a big contributor for UCSB this season as well, batting .348 with 56 hits and 24 RBIs over the course of the season.

The Aggies are led in batting percentage by senior utility Taylor Peters, who is batting .357 and has 46 hits for the year. While not batting at an extraordinary percentage this season (.254), junior infielder Ashley Lotoszynski leads her team with 27 RBIs to go with four home runs.

UCSB sophomore pitcher Veronika Gulvin has led the team with 38 appearances and the team-best 2.77 ERA; however, with only one upperclassman pitcher, the Gauchos have struggled at times from the mound. The Aggies look to have the advantage when it comes to overall ERA, besting the Gauchos 3.64 to 4.14.

The last time Santa Barbara faced UC Davis was last season in May, during which it swept the Aggies in Davis in three games.

While UC Davis’s season is likely over following its last two series, UCSB is in decent position for the postseason. Sitting at 8-7, the Gauchos are tied with Long Beach State for third in the conference, with Cal State Fullerton and CSUN holding first and second place, respectively. Santa Barbara sits four games back from Fullerton, which it will host in its final series of the season.

Although the Aggies are restricted by their last-place record at this point in the season, nothing’s stopping them from presenting a challenge for the Gauchos and fighting for a competitive series. The Gauchos will look to maintain their strength at home, where they have boasted a 13-4 record this year.

The series kicks off at 3 p.m. on Friday, May 5, at Campus Diamond. The series will resume on Saturday, May 6, with a doubleheader starting at 1 p.m. and 3 p.m.