The Daily Nexus
Water Polo
Season In Review: UCSB Women’s Water Polo
May 4, 2017 at 5:00 am by Tommy Pardini

After a promising start by its young group of players, the UCSB women’s water polo team stumbled toward the end of the season finishing in last place in both the Big West regular season standings and tournament. UCSB finished the season with a record of 15-14 and 0-5 in conference play. 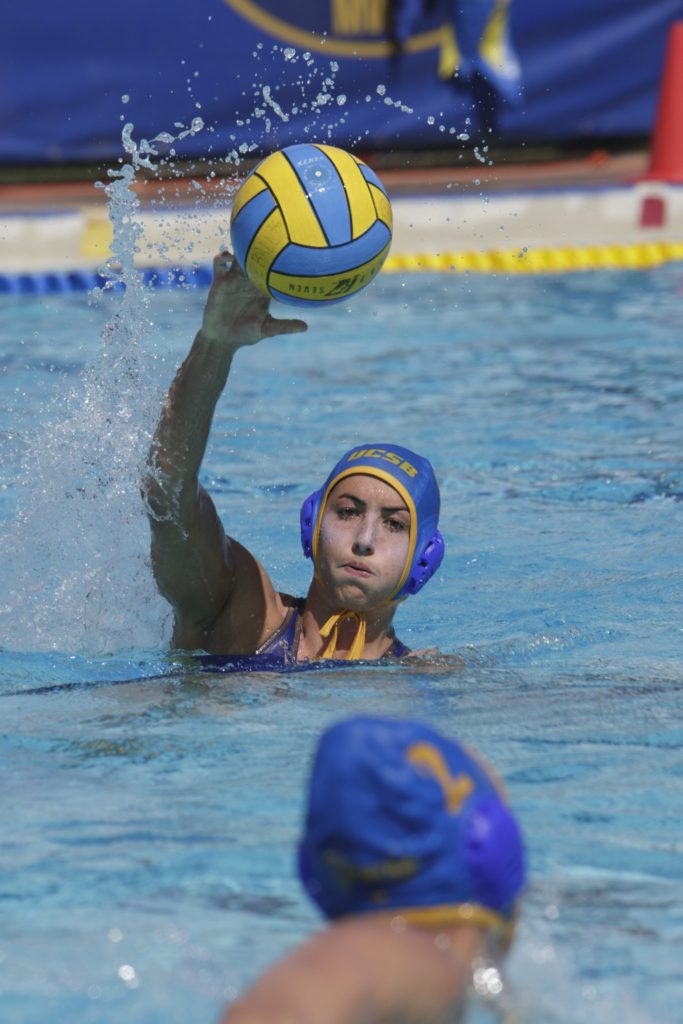 Heading into their first conference game, the Gauchos were tied for the best record in the Big West at 14-6 with the eventual regular season and tournament champions UC Irvine. Fourteen wins through their first 20 games also set an all-time UCSB record. UCSB was one season removed from a historic run at its first ever Big West Tournament championship.

Even though half of this year’s squad consisted of new players — eight freshmen and a transfer — it looked as though UCSB was bound to strongly contend in the conference and potentially defend last season’s title.

The season began at Campus Pool as the Gauchos hosted their annual Winter Invitational, where they went 4-2, losing only to powerhouses USC and Michigan. A few road tournaments later, UCSB was looking good with an 8-4 record with all of its losses coming against top-six opponents in which the games were competitive. Santa Barbara encountered a hiccup versus San Jose State, but then reeled off a five-game win streak.

At this point the Gauchos stood tall with their best 20-game start in program history. Only one of their losses came from a team ranked below them in the national rankings.

The next game was the start of conference play on the road against UC Davis. UCSB came up short in this game and never reverted to its winning ways. The team had more than two weeks off until it traveled to Hawaii to play three games.

In Hawaii, the Gauchos narrowly defeated San Diego State and were outplayed by Hawaii and USC. UCSB came home to face a red-hot UC Irvine team who was riding an eight-game win streak. The Gauchos were handled by the Anteaters and with only two games remaining, the reigning Big West tournament champions were looking for answers.

Still searching for their first conference victory, Santa Barbara hosted Long Beach State on senior day in front of a great crowd. Sophomore utility Kate Pipkin tied the game up in the final three seconds of regulation in what turned out to be the most exciting game of the season. Desperate for the victory, the Gauchos battled with the 49ers in six overtime periods, but fell short, dropping to 0-4 in conference matches.

As deflating as the loss was, the team remained poised and focused on the task ahead: Cal State Northridge. Northridge was winless at home coming into the game and it hadn’t won a Big West regular season meeting since 2015. In a close, hard-fought game, UCSB blew its lead and ultimately lost by one goal.

Even after ending conference play winless, the Gauchos were still a team to be afraid of in the tournament since they showed promise earlier in the season.

Santa Barbara’s first game of the Big West Tournament was against none other than Long Beach State, the team that spoiled their senior day. Despite the fact that it was the three seed versus the sixth seed, UCSB had every reason to believe it could win following the hard-fought battle it put up in the two programs’ last meeting.

After leading for most of the contest, the Gauchos allowed three unanswered goals late and lost by one goal yet again.

With a sixth-place finish in both the regular season and the tournament, this was not the season the Gauchos had in mind. However, it’s understandable, considering the number of new players that needed to be incorporated.

The season may not have ended in a terrific way, but there were still plenty of noteworthy performers on the team. Senior utility Taylor Shore ended up leading the team in goals, steals, ejections and field blocks, while Pipkin, the transfer from Indiana, found her role leading the team with 26 assists. Other seniors like attacker Brenna Thomas, utility Jenna Solberg and defender Sophie Trabucco did a little bit of everything in their final seasons.

Sophomore Sarah Kreiser also chipped in all over the place with her aggressive attacking and defending. Freshman utility Sarah Snyder was second on the team in goals while other freshmen like attacker Natalie Selin and utilities Kate Coski and Abbey Grosse contributed as well with 38 goals combined. Another standout freshman was goalkeeper Kenzi Snyder, who finished the season with the third most saves in the Big West.

With six outstanding seniors graduating, some of the younger players will need to step into bigger roles next season in order to make it successful. As Head Coach Serela Kay continues to build a culture and bring in talented players, this program has great years ahead of itself.