The Daily Nexus
Water Polo
UCSB Falls Flat in Conf. Title Defense, Finish in Sixth
May 1, 2017 at 5:02 am by Tommy Pardini 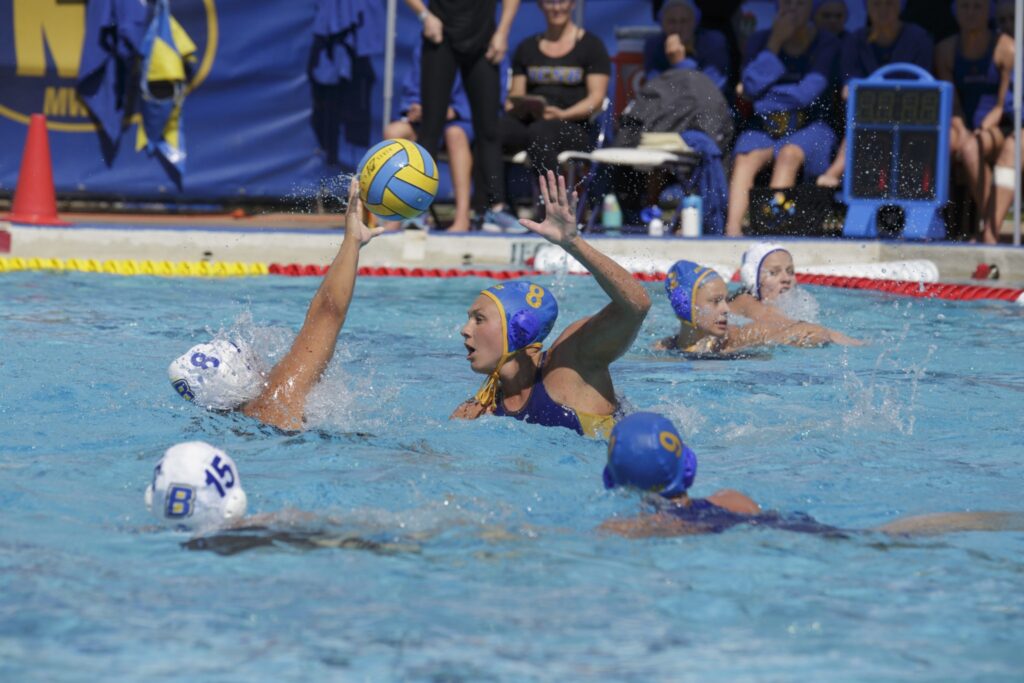 After ending the season on a seven-game losing streak, the Gauchos end this campaign with a 15-14 and 0-5 conferene record.

The Gauchos controlled their first-round matchup against Long Beach State, holding a lead for most the game but the 49ers ended regulation on a 3-1 run and took care of business in overtime.

The last four meetings between these sides were all decided by just one goal, the most recent being a six overtime LBSU victory two weeks ago.

For the majority of the game, Santa Barbara looked like the three seed rather than Long Beach.

The Gauchos were on the board first after senior defender Sophie Trabucco dished it to sophomore utility Kate Pipkin who slotted it into the lower left corner.

After a 1-1 first quarter, Pipkin scored again with skip shot on a penalty less than thirty seconds into the second frame.

Shortly after, senior attacker Brenna Thomas stole the ball and took it the full length of the pool to finish the coast to coast goal.

At this point Long Beach was on their heels as UCSB was in total control at both ends of the pool leading 3-1 early in the second quarter.

The 49ers got a goal back but in the ensuing possession redshirt senior utility Miranda Schrader executed a great move to lose her defender and score the one on one goal.

Long Beach State scored at the 1:47 mark in the second quarter to make it a 4-3 game at the half.

With a little over three minutes left in the quarter, sophomore utility Sarah Kreiser scored a powerful shot on a Gaucho power play.

UCSB looked as if they would get their revenge on Long Beach with a 5-3 lead with roughly three minutes remaining in the third quarter.

But as we’ve seen down the stretch of the season, the Gauchos have struggled to hold onto leads and close out games. The 49ers kept the trend going as they began to turn this game around.

Long Beach senior defender Christina Kotsia went on a sole run of three straight unanswered goals to give the 49ers their first lead of the game with 7:10 left in the fourth quarter.

LBSU took the lead in the first overtime thanks to sophomore defender Annabel Harman’s second goal of the game.

UCSB failed to score in each of the overtime periods resulting in a 7-6 loss in the first round of the Big West tournament.

The loss put them in the fifth-place game versus Cal State Northridge, who were defeated by the hosts UC Davis in the first round.

The three previous matchups between UCSB and CSUN this season averaged a total of 17 combined goals.

This time around only 8 combined goals were scored, the lowest combined goal total that UCSB has been a part of since March 2015.

After the first quarter Northridge led 1-0 as both sides struggled to get anything going on offense.

Less than a minute into the second quarter, Thomas tied it up for the Gauchos with a remarkable lob shot as the shot clock expired.

Junior attacker Madeline Sanchez got the lead back for the Matadors at the 4:49 mark in the second quarter with one of her four goals in the game.

In addition, the Big West leading goal scorer has scored 2.55 goals per game this season, placing her fourth all time in Big West history.

With four minutes remaining in the second frame, senior utility Jenna Solberg fired the ball past the goalie from short range to even the score up at 2-2.

The first half ended with Northridge on top of Santa Barbara by the score of 3-2.

UCSB tied it up in the third quarter from a Pipkin lob shot in transition, however this was the last goal of the game for the Gauchos.

Sanchez went on to score two goals for the Matadors to end it at 5-3, securing fifth place in the Big West tournament.

UCSB finished in last place in the conference tourney for just the second time in school history.

Even though this season didn’t pan out as they wished, the Gauchos have a very young and talented core that have a bright future ahead of them.