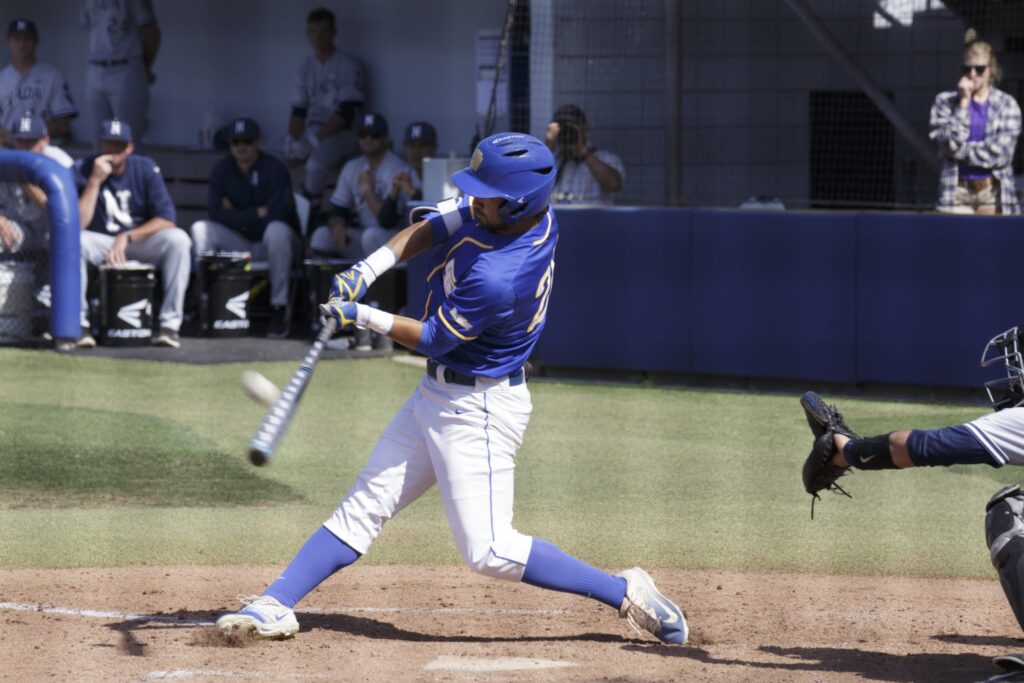 Although losing the series with back-to-back losses against UC Riverside Friday and Saturday, the UCSB baseball team was able to bounce back and steal a 6-5 win Sunday afternoon to improve its record to 19-22 overall and hold sixth place in the Big West standings with a 5-7 record.

The Highlanders, who now sit at 16-22, scored a couple early on and threatened late in the game. Paired with some clutch ninth inning at bats, True freshman starter Chris Lincoln with the rest of the Gaucho bullpen pitched just well enough for UCSB to avoid being swept.

Lincoln fared pretty well in his first collegiate start. Given the ball on the rubber Sunday, the freshman, who previously had 14 appearances out of the pen this year for the Gauchos, went 3.2 innings pitched giving up two earned runs off four hits.

Those two runs came off of two solo shots in the bottom of the second off the bats of DH Connor Cannon and second baseman Cody Sporrer. After giving up the long bombs, the young righty would go 1.2 more innings striking out three more batters. In all Lincoln would punchout six UCR batters.

Offensively, UC Santa Barbara would get things up and going in the top of the third with a sacrifice fly off the bat of centerfielder Tommy Jew scoring Dempsey Grover. In the fourth, the Gauchos would have there almost ceremonial big inning, scoring three runs.

Getting his first start of the season Sunday, Junior Kyle Plantier would take advantage of his given opportunity by going big fly ya-ya to left center where the big boys live to put the Gauchos ahead. Plantier would collect his first and second RBI on the two-run homer. Following the two-run tater, newly put in relief pitcher Matt Hardy would throw a wild pitch allowing Dempsey Grover to score.

One more run would be added in the sixth off a Dempsey Grover solo home run. Grover, the Gauchos everyday man behind the dish, would have a day going 3 for 4 while scoring three runs for UCSB. Grover, a Johnny Bench Award candidate, is now hitting .286 with four home runs and 13 RBI after today’s performance.

Eventually, UCR would find its way into UCSB’s bullpen. After a shutout relief performance from Kevin Chandler, usual Sunday starter Ben Brecht would take the mound. The gentle freshman giant would throw well going 1.1 innings pitched in his first bullpen appearance of the year, but would allow one earned run in the seventh off a single through the right side off the bat of Mark Contreras.

In the bottom of the eighth, things would get interesting. As if suddenly taking plays out of the San Francisco Giants playbook, the bullpen would start to get rocky. Righty Steven Ledesma would be the next guy on the bump for the Gauchos.

After allowing two runners on, Ledesma would give up a two-RBII single to Cody Sporrer to left field. Sporrer faired well against Gaucho pitching himself Sunday going 2 for 4 with 3 RBI. Ledesma would get the second out of the inning via fly out to right, but that would be the end of Ledesma’s day. Closer Shea Barry would come in to finish the inning.

Now with the game tied up by a score of 5 to 5 in the ninth, Tommy Jew would lead off the inning with a triple to left-center field. Eventually getting runners on second and third with one down, Kenny Corey would hit a deep fly ball to centerfield scoring the go-ahead run with a sacrifice fly. The inning would soon end short after.

Barry still on the mound, the Gauchos would need three more out to put away the Highlanders. To lead off the inning AJ Sawyer would hit a bullet into right centerfield. However, Tommy Jew would be there to sell out for his team. Snaring the lined shot in the gap, Jew would lay out, getting parallel to the ground while snow-coning a ball in his glove. Jew would not only have the play of the game on offense but would make the play of the game, maybe even of the year on defense as well.

Barry would close the door for the Gauchos getting Mark Contreras to strike out and Michael Farris to end the game on a groundout to shortstop JJ Muno. Barry would get the win for the ‘Chos improving his record to 1-1.

The Gauchos, although improving their record, are still at 5-7 in the conference. UCSB still has a lot of ground to make up if they want a shot at regionals. With its RPI sitting at the high 100’s, a chance at a Regional seems small unless Santa Barbara can get the automatic bid by winning its conference.

The Gauchos will begin a three-game set at home against the UC Davis Aggies next Friday at 3 p.m. The Gauchos will need a sweep of the series if they hope to keep their playoff hopes alive.