Hours removed from a heartbreaking loss late last night in the 11th inning, the UCSB baseball team would hope to recover and get a win on Saturday night in order to possibly salvage a series win in Sunday’s would be rubber match.

Unfortunately, not having top ace Kyle Nelson might have been the deciding factor before the match started as redshirt sophomore Chris Clements, the normal Sunday starter, dropped to 1-6 on the year after giving up 11 of UCR’s 15 hits and six of its nine runs.

The loss drops Santa Barbara to an even more disappointing 18-22 overall and a 4-7 Big West record leaving them with only a sixth place standing. With the way the season has turned out, the Gauchos chances of making the Regionals for a third straight year seems to be dim.

UC Riverside is now 16-22 on the year and is still right behind UCSB in the conference standings with a 4-10 record. The win on Saturday secured the Highlanders first Big West series win of the season.

Despite netting nine hits and five runs of their own, Santa Barbara’s struggles on the mound continued from beginning to end as 15 hits and nine runs proved to be too much especially when that led to a very early 6-0 lead for the home team. 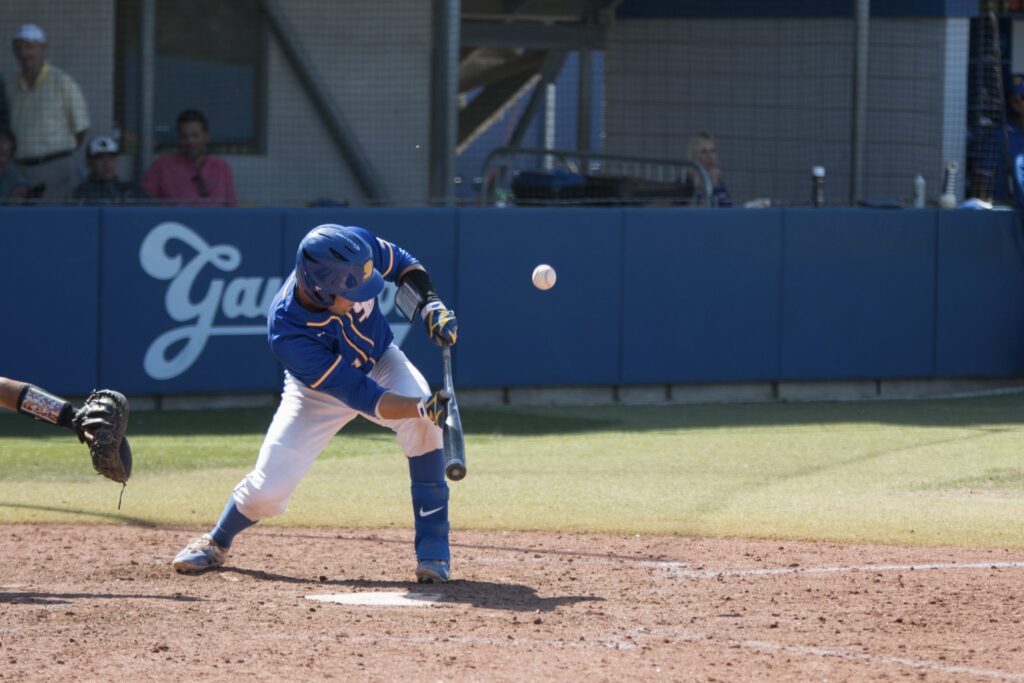 Dempsey Grover bunts to advance one of his teammates to third base. Stephen Manga / Daily Nexus

UCR would begin the scoring quickly as in the first inning as a senior outfielder Mark Contreras hit a RBI single right up the gut the followed by a fielder’s choice double play scoring one run as well making the score 2-0 after the first.

Two more runs came in the third inning off of a two-run single by redshirt senior utility Michael Farris. After a scoreless fourth by both teams, a pair of runs was netted again by the home squad, this time off of an AJ Sawyer RBI single, and a RBI ground out from Contreras making the score 6-0 after five full innings.

Sophomore designated hitter Sam Cohen kicked off the Gaucho sixth with a single to right field. He would come to score on the next hit making the score 6-1 coming off a double from the bat redshirt freshman Tommy Jew who has quickly become one of the brightest spots of UCSB’s young line-up. Despite the 1 for 5 outing, the center fielder is only one of three Gauchos batting above .300 and the only freshman doing so.

Despite the RBI double with no outs, the Gauchos failed to score any more runs in the inning leaving Jew on base after Highlander pitcher Trenton Toplikar got the next three outs in succession once he replaced Alex Fagalde who is now 6-3 on the season.

The top half of the next frame, junior first baseman Austin Bush would come to the plate and smack a double to left center scoring two runs making the score 6-3 after seven innings. Bush would finish the day 2 for 4 with 4 RBI’s and has now has improved his hitting streak to five games.

Again after failing to score more runs despite only having one out in the top of the seventh, the Gauchos had still cut into the lead leaving them with hope of a comeback. UCR took away that hope in the eighth inning as three runs were scored off of junior relief right-handed pitcher Alex Garcia who saw his first action since pitching 0.1 of an inning on April 11th against Nevada.

Redshirt junior catcher Tony Gudino netted two of the three runs with a single to right field before Contreras would attain his third RBI of the day off of another single. Contreras would finish the day 3 for 4 with three runs batted in.

Not being able to muster even one out, Garcia came out having allowed the three runs. With the UCSB bullpen being the mess that it is, the Gauchos were forced to throw backup catcher Thomas Rowan on the mound to try to get out of the inning.

Rowan did actually have experience pitching beforehand as in high school in his junior year he was 7-1 with a 1.81 ERA, but facing high schoolers and Division-I college athletes are completely different.

To the redshirt sophomore’s credit, he did get out of the inning unscathed allowing only two hits but giving up no runs and actually striking out one batter. It was a great sight to see an athlete step up and make plays from a position he is not used too, but being in a position to have to throw Rowan out on the mound is proof of how bad things are in the pen for the Gauchos.

Heading into the final inning down 9-3, UCSB scored two more runs off of another Bush double, but it would obviously not be enough as it would fall 9-5.

Once again, this loss is indicative of how the Gauchos have lost most of their games: their pitching staff. Being short-staffed is always tough, and having inconsistency from starters and relievers makes any coaches job tougher but UCSB needs to somehow make ends meet.

It’s one thing to miss the postseason which would be very disappointing, and at this point is basically an inevitability, but it’s another entirely if this team never even breaks the .500 bubble.

Head Coach Andrew Checketts has had a tough go at it this year, but having just been given a contract extension, we know he is here to stay, and at this point, him possibly being able to develop the young talent seems to be the only positive in UCSB baseball.

The Gauchos finish the series tomorrow at 2 p.m. at UCR stadium.