The Daily Nexus
Music
The Regrettes Bring Beach Punk to Velvet Jones
April 27, 2017 at 5:17 am by Ryan Hykes

In the midst of the trendy bars, picturesque beach sunsets and Spanish architecture of Santa Barbara, punk rock still lives at Velvet Jones. Last Friday night, the L.A.-based upstarts known as The Regrettes rocked Santa Barbara with openers nucklehead and Pancho and The Wizards.
Velvet Jones holds a unique position among Santa Barbara’s great music venues. Everything about the place elevates it from a simple concert venue to a communal space for like-minded people to mosh and go insane together. There’re the rebellious red walls and lighting. There’s the black-and-white mural of a guitarist flipping off the crowd. There’s the “rock-on” gesture in the Velvet Jones logo behind the stage. It all adds up to form a very welcoming space that feels specialized in the type of community it aims to serve. When talking to fellow concertgoers, a few claimed Velvet Jones as their favorite venue. It’s intimate, but not cramped. It’s punk, but still inviting.

The night began with Pancho and The Wizards, who perfectly embodied the new California beach punk skater aesthetic. The San Luis Obispo band led by their overalls-wearing frontman Tristan Cole Wildey, or Pancho, showed a lot of potential. Pancho’s vocals perfectly cut through the more noisy backing instrumentation and deliver some funny and tightly written lyrics. The band also did a great job bringing the energy throughout the set with the group’s bassist jamming out in the crowd for a portion of one of the songs. It’s easy to envision Pancho and The Wizards moving up in the punk scene here in California.

Following Pancho and The Wizards was the Ventura-based punk band nucklehead. This group similarly drew inspiration from the California beach skater punk scene, but went about it a different way. While Pancho’s vocals were clear and crisp and separated themselves from the mix, nucklehead’s vocals were the opposite and utilized heavy mic reverb to create a sound that reminded me of some of the harder Descendants cuts.  As their set was wrapping up, a few audience members yelled out for one of the band’s most popular cuts, “Burrito,” which is about rushing to the toilet after a bad burrito. The crowd went nuts and the beginnings of a mosh pit that would soon envelop Velvet Jones began to form.

If you find yourself at a show at Velvet Jones on a Friday night, you might find yourself intensely hungry like I was last week. Luckily, at Velvet Jones there’s Mac N Cheese After Dark. I ordered without ever having to leave the building, but you can also order out front, where many drunk clubgoers were taking full advantage of the dish. Then, finally, the main event was here: The Regrettes.

The audience packed toward the stage as the band came out. While it took a while to get going, by the third song the crowd was going nuts. Bright pastel-colored balloons were knocked about by the jumping mass of people as the moshing got more intense. The energy that filled the room felt so contagious that I rushed into the pit knowing my glasses could be destroyed with one rogue elbow — but I didn’t care. During one of the band’s best songs, “Picture Perfect,” lead singer Lydia Night came into the audience and sang the catchy-as-hell refrain with the crowd as we were all dancing. I guarantee it was the coolest thing that happened in Santa Barbara that night. 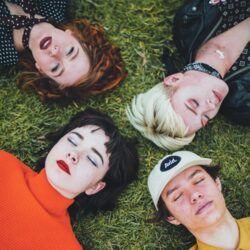 Courtesy of The Regrettes

As I started getting tired, I moved to the back of the pit to get some air and saw a sound tech a mere 10 to 15 feet away from the pit precariously balancing two iPads filled with green and yellow sound monitors on one arm. I do not understand what he was thinking, but luckily for him, the pit stayed relatively contained, and by the time the infamous wall of death began a few songs later, he was gone. While you might be thinking something called the wall of death seems idiotic and reckless, which I assure you it is, it’s something I had to experience at least once. That’s the thing that makes moshing fun in the first place. I soon saw how crazy it could be when a fully-grown man got knocked to the ground beside my feet, but I soon helped him to his feet and he was back moshing. That’s what makes Velvet Jones special. You feel the community atmosphere and when a band as charismatic as The Regrettes performs, the audience will have an amazing time. I asked bassist Sage Nicole after the show how the band is able to transfer their energy to the audience so well and she said, “It’s something that came naturally, really. Once we got more used to performing, we’ve tried to play it up.”

You might think from my description of the show that The Regrettes is a band of veteran rockers, but you would be wrong. None of them are even seniors in high school. That is what is perhaps most exciting about The Regrettes. They aren’t just a high school rock band, they are a fully fledged, intensely energetic band with hard-hitting punk songs and a nostalgic pop-appeal that also happen to be teenagers. As I travelled back home covered in sweat not entirely my own, I knew that all of us in that mosh pit that night had experienced something special.