Heading into the series, UCSB stood tied with CSUN for third in the Big West, holding a conference record of 5-4 and an overall record of 25-20. In comparison, Long Beach, at 7-2 in conference play, was in first place with Fullerton closely trailing.

In game one of the series, the 49ers beat the Gauchos 4-1. Long Beach got an early start against the Gauchos, taking a 1-0 lead in the bottom of the first thanks to an error made at third base by UCSB. 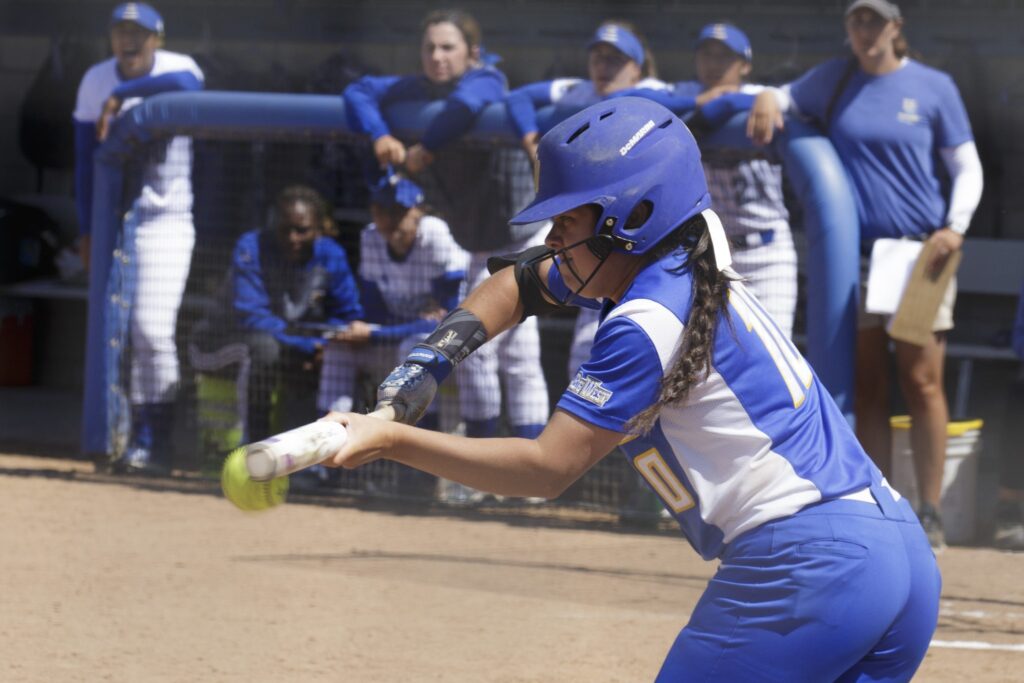 Jaqueline Hinojosa bunts and gets ready to run to first base. Dustin Harris / Daily Nexus

Santa Barbara answered back with a run of its own in the top of the second. Sophomore infielder Melanie Manor grounded out, allowing teammate Alyssa Diaz to make it home.

In the bottom of the fourth inning, the 49ers extended their lead by three runs with junior infielder LT Torres’s double to right center. Torres brought in junior outfielders Rachel Loera and Lauren Macleod as well as senior infielder Mattie Scheele.

Due to the 49ers outhitting the Gauchos by 6-2, Long Beach pitcher Cielo Meza picked up her fourth win of the season. At 4-0, Meza has yet to lose a game this year. Gaucho pitcher Veronika Gulvin took the loss, setting her season record to 18-11.

In the second game of the series doubleheader, UCSB fired back, defeating Long Beach 5-2. After three hitless innings for the Gauchos, they finally locked in, getting three hits leading to a two-run fourth inning.

First, sophomore infielder Sierra Altmeyer brought in junior outfielder Jessica Johnston off of a double. Shortly after, Santa Barbara extended its 1-0 lead with senior infielder Emily Brucelas’s double to center, bringing in Altmeyer for the run and making the game 2-0.

The game remained at 2-1 until the top of the sixth, when Alyssa Diaz doubled straight down the right field line, bringing in Altmeyer for the score. Following the play, Diaz was at third.

Diaz seized the opportunity to score off of a wild pitch, increasing Santa Barbara’s lead to 4-1. The Gauchos didn’t let up in the sixth, as Brucelas homered to left field and made it a four-run lead over the 49ers to start the bottom of the sixth.

The 49ers made an effort to make up some ground against the Gauchos, as Lombardi went on to single to center and bring in Flores for the score. This made the game 5-2, but it was too little too late for Long Beach, who went scoreless in the final inning. For Santa Barbara, sophomore pitcher Ashley Wright picked up her third win of the season for a 3-2 record.

In the final game of the series, both teams fought hard, pushing the game to an extra inning in which UCSB pulled ahead with a run to secure the 4-3 win.

Long Beach, coming off the loss, struck early, scoring two runs in the bottom of the first and then another run in the bottom of the second. The early 49er scoring was thanks to Flores homering to left field, bringing in senior outfielder Sammi Gyerman in the process for the early 2-0 lead.

The Gauchos answered in the top of the second and third, scoring one run in each inning. Alyssa Diaz countered with a home run for Santa Barbara in the second, then Johnston hit a sac-fly to center field, allowing senior outfielder Jacqueline Hinojosa to score.

Unfortunately for Long Beach, their hot start would end with their unearned run in the bottom of the second. UCSB took advantage of the 49ers going dry, with redshirt freshman Whitney Pemberton singling to left field in the top of the fifth. Senior outfielder Kristen Clark would score on the play, tying the game up at three runs apiece.

Both teams went scoreless in the next two innings, forcing a decisive eighth inning. The Gauchos wasted no time as they scored on a Brucelas single to third. A throwing error would allow Pemberton to score unearned. The 49ers didn’t answer, giving Santa Barbara the win 4-3.

With yet another series win for the Gauchos, they sit at a competitive 7-5 in the Big West, while Long Beach falls to 8-4. This doesn’t shake up the conference standings too much, as CSUN remains right with Santa Barbara following a series win over Cal Poly. Fullerton’s conference lead has been extended, as they swept Hawaii in their most recent series.

The Gauchos, they will travel off the mainland to visit a struggling Hawaii team next, looking for their fourth-straight series win.