The Daily Nexus
Sports
Gauchos even series with 5-2 victory over Long Beach State
April 23, 2017 at 5:00 am by Omar Hernandez

If there was one thing that UCSB proved in its win at Long Beach, it’s that the phrase quality over quantity rings true even in softball. 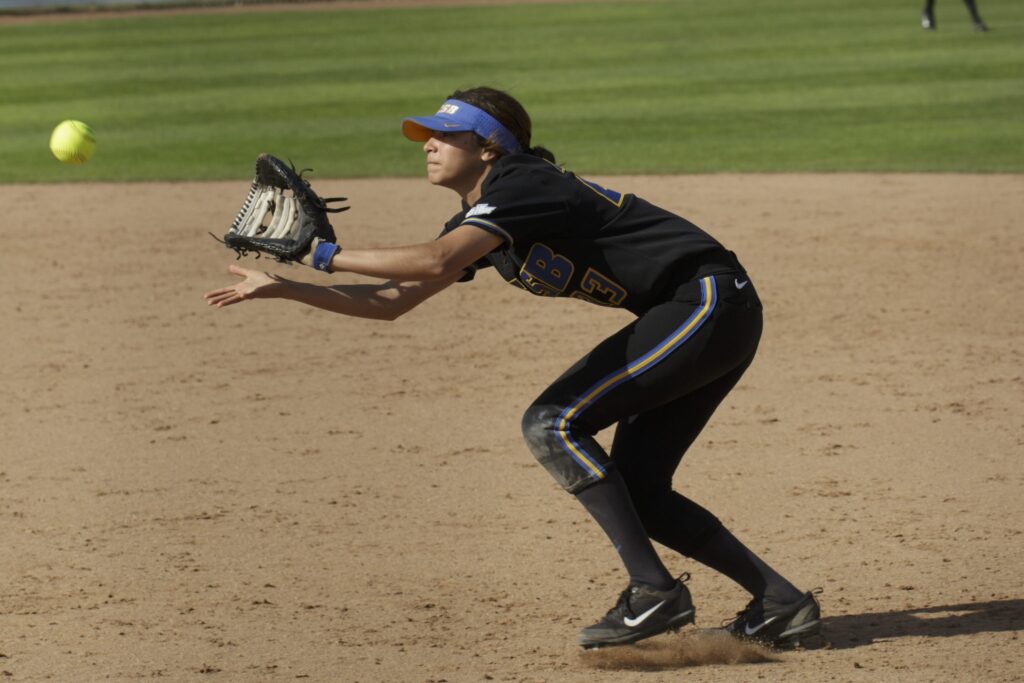 The Gauchos were able to score three more runs than the 49ers on two less hits, as the team combined for three doubles and a home run to go along with an early single. This efficiency proved to be a difference maker as Long Beach could only muster a couple runs off of the seven hits it managed to record.

The game started as a pitchers duel, as Ashley Wright (4-2) was at the mound for UCSB competing against freshman Cielo Meza (6-6). Long Beach State came into this game with one of, if not the best, pitching staffs in the Big West, and Meza contributed greatly to to that, coming into the game with a 2.59 ERA. Wright came into the game sporting a 2.95 ERA, so it was not too surprising that up until the 4th inning neither team had a hit.

The Gauchos struck first however as infielder Sierra Altmeyer hit an RBI double to score former Big West player of the week Jessica Johnston. Altmeyer has been outstanding for the Gauchos this year batting .382 and leading the Big West’s most potent offense in home runs (9) and RBI’s (31). The sophomore was then brought in herself by Emily Brucela’s RBI double, pushing UCSB’s lead to 2-0 to end the top of the fourth.

Long Beach State had an answer in the bottom of the inning however, as sophomore Julia Lombardi hit a ground rule double which brought in infielder Nichole Fry. The 49ers, after two straight outs to end the inning, ended up stranding runners on second and third base which was an early sign of their inability to get runners on base home.

The sixth inning served as the period in which the Gauchos did the majority of their damage as they were able to extract three runs from two hits. Sophomore Alyssa Diaz started off the scoring with a double down the right field line to bring in Altmeyer, and she then advanced to third and scored on consecutive errant throws. Brucelas then came up and blasted a home run to left field to finish off her dominant offensive performance in Saturday’s game.

This game was crucial for Brucelas, who hadn’t gotten two hits in a game since April 9. Hopefully this game serves as a sparkplug for the senior, as getting another offensive standout in the lineup would help ease the pressure off of the 3-5 slot which has been powering the team so far.

Julia Lombardi had another RBI in the bottom of the sixth to bring the deficit to three but the 49ers never got any closer as the Gauchos ultimately won the game 5-2.

This was a big game for the Gauchos as it allowed them to keep the goal of taking a series from the league leading 49ers intact. Getting five runs on the Long Beach State pitching staff was huge, as it simultaneously gave the UCSB pitchers room to work with and the UCSB hitters confidence moving forward that they can definitely hit off the best pitching staffs in the league.

Winning the next game would put UCSB in solid position to knock Long Beach off of its perch and take first place for itself, as its next ten games are all against Big West opponents.

If the Gauchos keep batting as efficiently as they did on Saturday however, they won’t have too much to worry about in terms of wins and losses.