The general energy for rap sensation Travis Scott has been anything but subtle recently. His last album, Birds in the Trap Sing McKnight, was a huge success, and, more importantly, his recent tour announcement has had the hip hop world buzzing furiously. The 805 has been particularly excited with his seemingly out-of-the-way first stop of the tour at the Santa Barbara Bowl. Along with the rest of the shows on the tour, the Santa Barbara date sold out quickly — the floor seats sold out in a few minutes — and the performance put on by Scott was exactly as hyped as was anticipated.

When I arrived around 7:30 p.m., the Bowl was already filled with students and hip hop fans, many sporting old Saint Pablo Tour and Travis Scott merch and an expected amount of overpriced streetwear, like Bape and Supreme. I immediately hopped in the long, winding merch line and, after about 20 minutes, I bought a few things. I later found out that, much like the Saint Pablo Tour, each city will have its own unique merchandise on sale for the audience. I then made my way to my seat to wait anxiously while some other rap hits played in the background.

Travis’s DJ, Chase B, came out to amp up the crowd around 8 p.m. with some pre-concert bangers. His first selection, Young Thug’s heavy “Danny Glover,” hit the hardest and had the general admission floor moving aggressively. Among the other songs that Chase dropped were Lil Uzi Vert’s captivating ballad of “XO Tour Life” and, what is now clearly an essential at any high-energy event, Future’s earth-shattering “Mask Off.” After a good 30 minutes or so of Travis preparation, it was finally time for the dark horse of hip hop to make an appearance.

Scott came out around 8:30 p.m. and began the tour similarly to his new album, opening with “The Ends” and following with the infectious “Way Back.” In typical animalistic Travis fashion, he began with some auto-tuned adlib singing into the mic and the important announcement that, contrary to the many Santa Barbara Bowl signs around the stage, “If you ain’t with the mosh pittin’ and crowd surfing, then get the fuck out!” This, of course, was received with extreme approval from the crowd and was an ongoing theme of the night. 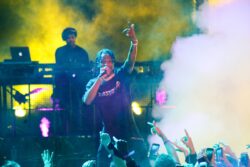 Travis continued the energy of the tour with throwback “Mamacita,” Kid Cudi-featured party anthem “Through the Late Night” and hard-hitting classic “Upper Echelon.” One show highlight occurred early on, when a fan climbed on stage to get rowdy with Travis. After security quickly ran over to escort him out, Scott shooed them away and then angrily commanded them to “get the fuck off my stage.” The lucky fan then jumped into the crowd right at the drop of “Upper Echelon” in what I can imagine was the craziest personal experience of the night. This gimmick was quickly overdone, however, as too many fans after tried to get on stage and abuse the experience by overstaying their welcome, coming on at the wrong times or trying to take pictures with the performer, which was highly discouraged by Travis.

Among the other hits played were the slow Travis staple, “90210,” Rodeo standout, “On My Dis Side” and lean-cup anthem “Sweet Sweet.” Every track that was played dropped hard and was met with screaming, jumping and aggressive water-bottle chucking from the man of the hour. The crowd always responded appropriately with some alarmingly large mosh pits and vibey dancing from those higher up in the seated areas. Scott, as a performer, was up to his usual standard, as he screamed every lyric with ease and moved quickly around the stage with high energy.

Around the middle of the show, Travis mysteriously took what looked to be a giant stuffed plush insect from behind the DJ stand and walked it back to the mysterious giant cage that served as a backdrop for the stage. He held it up to the cage for a giant mechanical bird claw to reach out and grab, and a huge mechanical bird similar to the one on his website was soon revealed behind the cage flapping its wings. 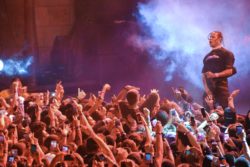 The heaviest and most popular bangers were saved for last, as “3500,” “beibs in the trap,” mega-hit “Antidote” and Kendrick-featured “Goosebumps” were among his final performances. He also included his wildly popular collaboration with Young Thug and Quavo, “Pick Up the Phone,” which involved him running up into the middle of the seated crowd. However, the peak of his show was right before these last songs, when the giant bird emerged from behind the cage and came to center stage, flapping its wings and lighting its eyes up. Travis then climbed on top of the winged beast and led the crowd in what were easily the two rowdiest songs of the night.

As far as the performance goes, no one in attendance could complain. Travis put on a crazy show, and the crowd was ready for the ride. Although the set was a little bit too short for the respective buildup, the show was still as incredible and ridiculous as I hoped. This tour will likely go down as one of the recent greats of the hip hop world, along with Kanye’s Saint Pablo and Drake’s Summer Sixteen.