Jack Tannenbaum, a third-year economics major, spoke at Wednesday’s Associated Students (A.S.) candidate forum in the Hub to discuss his plans for A.S. if elected as Student Advocate General.

Tannenbaum said in his opening statement that he is running on the platform of “attempting to listen to students and making sure students know this office is there for them.” 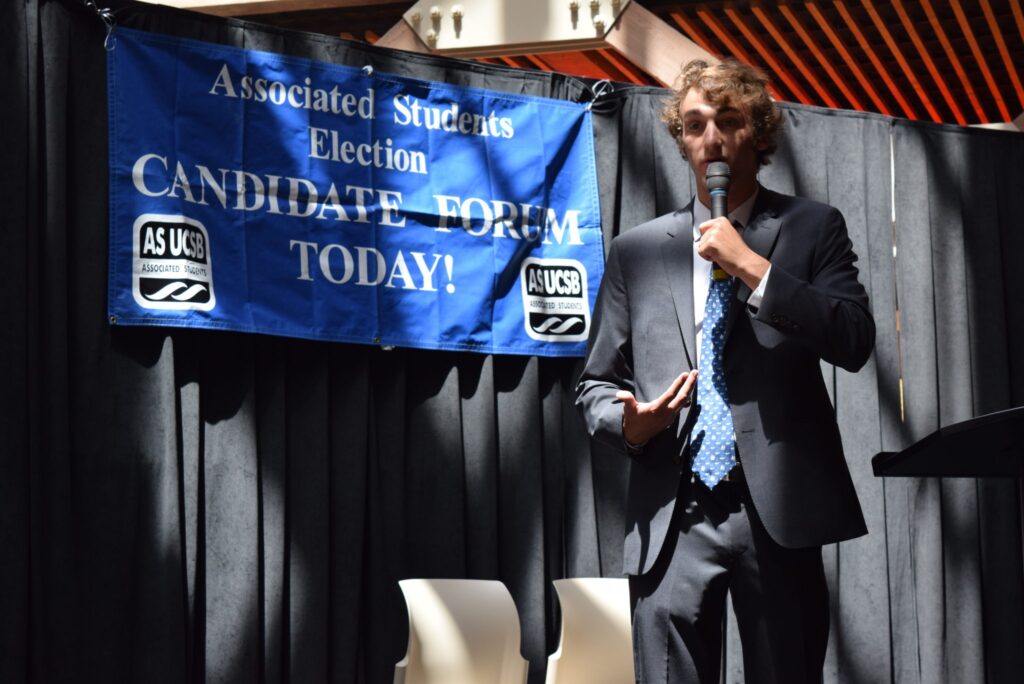 He emphasized the importance of advocating for all students and making sure they know he will be there as a resource for them on campus.

Steven Kwok, a member of the Elections Committee, posed a series of questions, some created by the committee and others asked anonymously by audience members.

Here are some highlights:

ON THE OFFICE: Tannenbaum said one of his “prime concerns” was creating more awareness of the Office of the Student Advocate General, since currently only about 20 students use the office per quarter. He plans to try to increase use of the office by encouraging resident assistants (RA) to give incoming freshmen information about the office’s resources. He said he plans to put an “extremely high” emphasis on promoting the office.

PRESSING ISSUES: Tannenbaum said he believes the election of President Donald Trump has made many students, particularly undocumented students, feel unsafe on campus. Another large issue is bringing controversial speakers to campus, and as Student Advocate General, Tannenbaum said he hopes to make sure students’ opinions are heard and that everyone feels safe. He also noted the rising costs of tuition and cliff erosion as big concerns for students.

ON BEING IMPARTIAL: “Non-partisanship is extremely important,” Tannenbaum said. He said he takes his status as a non-partisan independent seriously, having sought the endorsement of both Campus Republicans and Democrats to show he is committed to representing all students, regardless of their views.

ON INSTITUTIONAL RACISM: Tannenbaum said institutional racism is “one of the biggest issues in our country.” He said that as a white man, he has not experienced such racism but believes he can use his position to amplify the voices of those who do not feel heard on campus. Tannenbaum said he will try to make as many spaces safe on campus as possible and will do his best to make sure people’s voices are heard.

ON PERSONAL IMPROVEMENT: “I don’t sleep enough,” Tannenbaum said. “I push myself to work very hard and that often goes late into the night.” He said self care will be very important for him to do his best as Student Advocate General.

ON EMOTIONAL LABOR: Tannenbaum said he had not heard the term “emotional labor” in an “official context” but believes it is the “effort and emotion put into one’s work.” He said A.S. sometimes ignores the effort and time students put into the issues they are invested in on campus. He said, if elected, he will strive to work to make sure A.S. understands how much students care about critical issues on campus.

Tannenbaum also fielded more lighthearted questions, revealing that his favorite board game is Diplomacy, a game that requires negotiation among players. He said he hopes to take the passion he has for the game to be as passionate about his work as Student Advocate General.

Tannenbaum closed the forum by reiterating that he wants students to feel “heard, safe and represented,” something he feels is oftentimes overlooked within the community and student government.

Tannenbaum, describing himself as “a pretty loud guy,” said he will do his best to make sure everyone is heard and that there are resources available for students.

“Please know that I care about the students on this campus, and I really strive to make this a home for everybody,” he said.

Campaigning for A.S. elections began on Sunday and will continue for the next two weeks until voting results are announced on the night of April 27.