The Daily Nexus
Sports
Gauchos Travel to Pepperdine In Search of Midweek Win
April 18, 2017 at 1:44 pm by Jorge Mercado 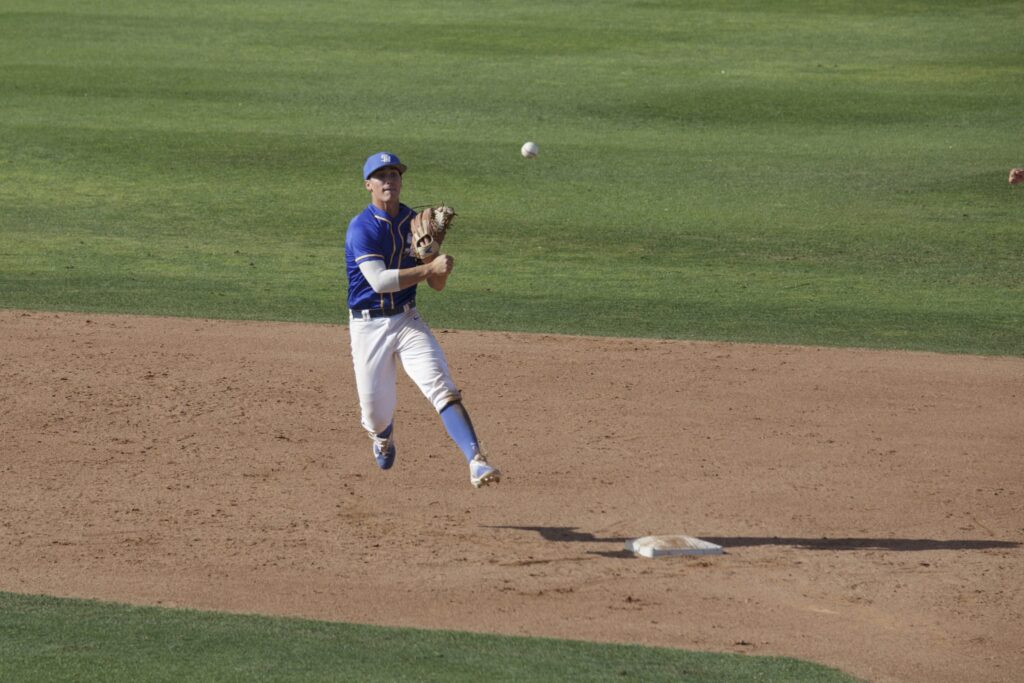 After fielding the ball, JJ Muno hurls it towards first base. Dustin Harris / Daily Nexus

Since losing four straight to begin the month of April, the UCSB baseball team has rallied to win four of its last six games in a very solid fashion giving the impression that last years College World Series squad is back.

Well, their record certainly doesn’t display that yet as the Gauchos are only 15-18, 3-5 in conference play, however, in its last six games, they have scored at least seven runs, something they only did in nine of their first 27 ballgames of the year.

This week, Santa Barbara will look to improve its non-conference record beginning with a road match against Pepperdine university, a team UCSB beat 10-3 at home earlier this season. The Waves welcome the visiting Gauchos boasting an even 17-17, and winners of six of its last nine ball games despite its recent conference series loss at BYU.

Despite having beaten them earlier this season fairly easily, UCSB can not take this game lightly for many reasons. The first being, that it has been horrible on away from home this season boasting only a 3-11 road record scoring only an average of 4.71 runs while giving up an average of 7.14 runs in those 14 games.

Another reason, Santa Barbara needs as many non-conference wins as it can get in order to better help its playoff chances in the case that it does not win a Big West title. Currently, the ‘Chos are 11-14 in non-conference play. Last season, they were 24-7 which helped them get a spot in the Vanderbilt Regionals despite finishing third place in the Big West.

In spite of its current record, all the Gauchos can do now is look to improve it by winning the rest of its non-conference games, which most are against quality opponents.

Focusing first on Pepperdine, Santa Barbara will definitely look to rely on the bats of junior Colton Burns, freshman Armani Smith, and senior Billy Fredrick. Starting us off, Burns is currently on a six-game hitting streak and has hit 11 for 28 over that span for a very impressive .392 BA. The utility was a Waves killer in the last match-up as he batted 3 for 4 with one home run, one RBI and earned himself a walk.

Smith has been a bright light in the Gauchos young stars. Since starting the season 2 for 13, the outfielder has rallied to bat 28 for 81 over the last over the last 20 games earning himself a starting spot for the team. The freshman has certainly made big plays this year including driving in the winning run in Sunday’s win over UCI.

Fredrick, the team’s only senior, has served a great purpose in the outfield, where the Gauchos were struggling earlier in the season, and on the plate. He ranks third on the team in batting average (.316) and second in on-base percentage (.431).

Ben Brecht will once again be on the mound for Santa Barbara today in search of his third-midweek win of the year. In his last start against Nevada, the freshman was great allowing only five hits and one earned run in 6.1 innings of work. In his four starts this year, Brecht has a solid ERA of only 2.79.

On paper, this win should be an easy one for the Gauchos, however, this season has been anything but that. UCSB needs a win, but it won’t get it unless it shows the grit it has shown over the last two weeks.