U.S. Secretary of the Interior, Ryan Zinke, was met by environmental protesters at a private event held Monday at the Reagan Ranch Center in Santa Barbara. 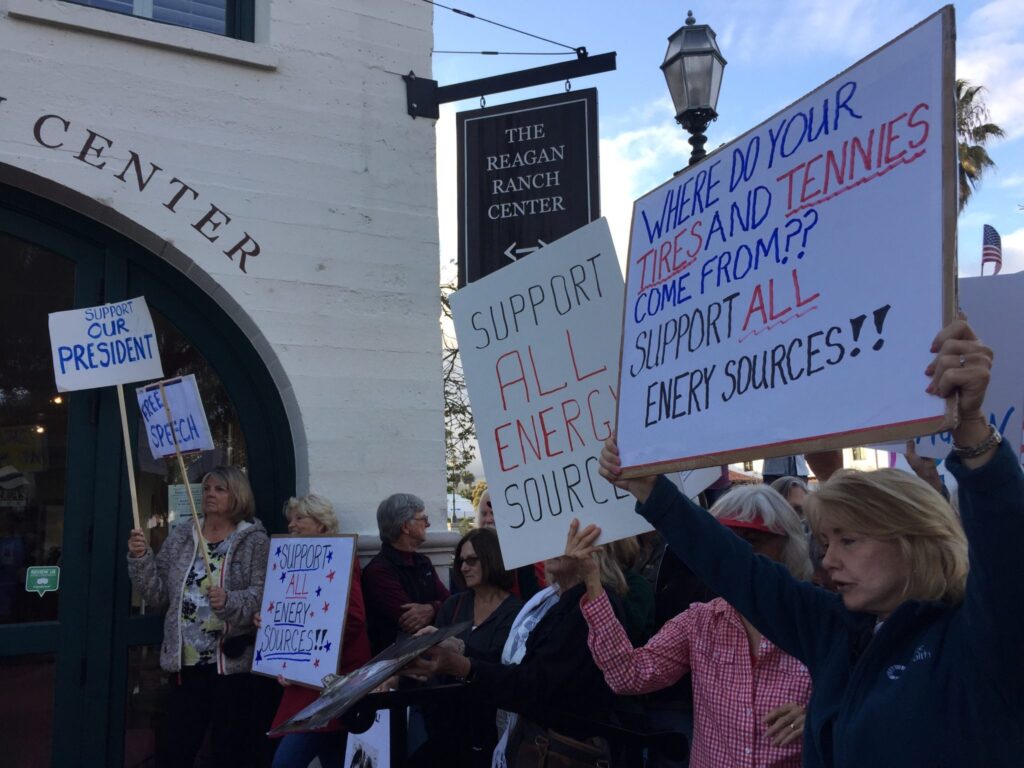 Although most of the protests were against Secretary Zinke’s plan to expand offshore oil drilling, some demonstrators rallied in support of the administration. Stephany Rubio/Daily Nexus

The protest was organized by the Santa Barbara Sierra Club (SBSC) in response to Zinke’s “announcement that the [Trump administration] will soon release an offshore oil directive to expand oil drilling in the Arctic, Atlantic and Pacific Oceans,” Katie Davis, SBSC chair, said.

In a March 6 press release on the Department of the Interior’s (DOI) website, Zinke said, “Opening more federal lands and waters to oil and gas drilling is a pillar of President Trump’s plan to make the United States energy independent.”

For Davis and local protesters alike, Zinke’s plan to expand offshore oil drilling evokes traumatic memories of the Santa Barbara oil spill of 1969 and the recent Refugio oil spill of 2015.

“He comes to an event a block away from one of the worst major oil spills in the United States when we’re still recovering from the damages from the oil spill just two years ago. Of course we’re going to protest,” Davis said.

Following the Refugio oil spill of 2015 that spilled 80,000 gallons of crude oil, state and federal legislators enacted new laws, and Santa Barbara County worked alongside local environmental organizations to draft a plan of action in the event of a future pipe leak, as the Nexus previously reported.

Despite such efforts, Zinke proposed on March 6 a region-wide, 73-million-acre lease sale offshore of Texas, Louisiana, Mississippi, Alabama and Florida for oil and gas exploration and development.

This lease sale will go into effect Aug. 16, 2017, which the Bureau of Ocean Energy Management (BOEM) said will grant leases to the highest bidder for exploration.

Davis said the SBSC put out a petition asking Zinke to not open up new offshore leases in the Santa Barbara County in hopes of preventing future pipe leaks. She said the petition has over 17,000 signatures.

“We are hoping to deliver it and that he gets the message that if they are going to open up [leases], there is going to be a real push back and a lot of opposition,” Davis said. 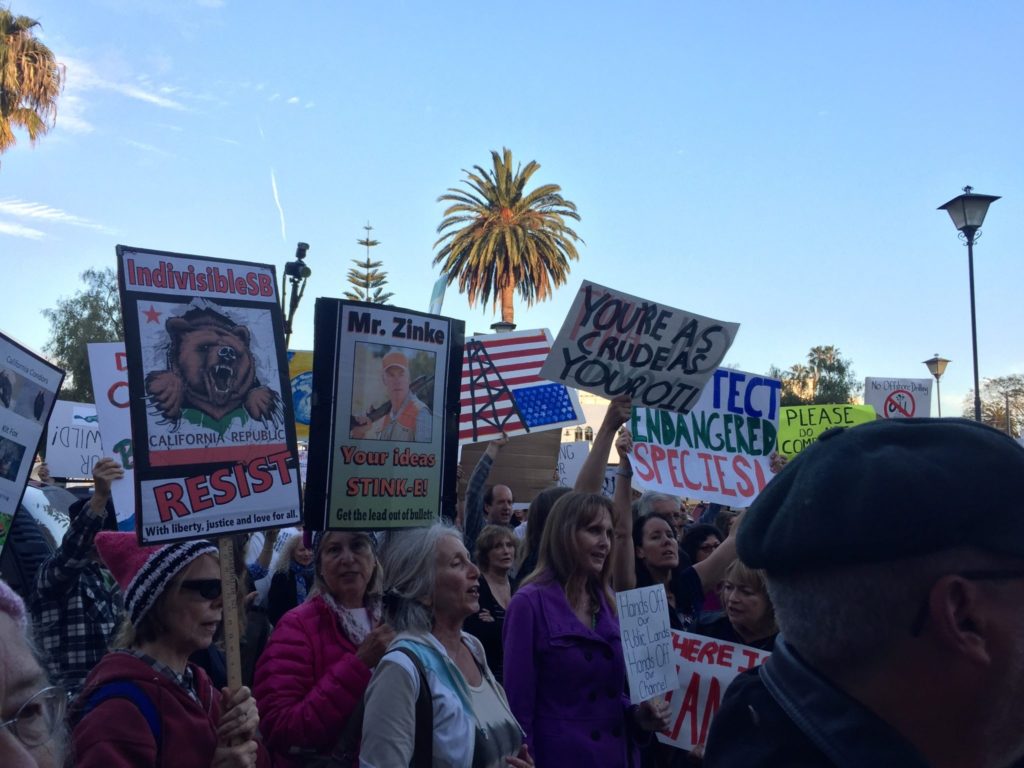 Local environmental groups spoke out against plans to expand offshore oil drilling amidst a visit by Secretary of the Interior Ryan Zinke to Santa Barbara on Monday. Stephany Rubio/Daily Nexus

Of the 470 leases issued in the Pacific Ocean, 43 are active. There is a total of 247,680 acres of oil and natural-gas-producing regions off the Santa Barbara County coast.

The crowd of over 100 protesters consisted of some pro-oil and Trump supporters, but they were overshadowed by the even greater number of environmental organizations and activists chanting “Trump has got to go” and “shame on you” toward Zinke and his attendees.

Food & Water Watch, Santa Barbara Progressive Club and the Santa Barbara Standing Rock Coalition were just some of the organizations present at the protest to express their own local environmental concerns.

Gabby O’Neal from the SB Standing Rock Coalition said their team is working with Santa Barbara City Council members to propose a new city budget plan that is “more aware” of its connections with banks, like Wells Fargo, that fund the controversial Dakota Access Pipeline.

After most protesters dispersed from the front doors of the Reagan Center, one of the attendees, named Michael Zirolli, dressed in a black tie and tuxedo, came out and began a conversation with the remaining protesters.

In response to a question of caring for water and air quality, he said, “I drink wine; I don’t drink water.”

the exxon Valdez ran aground in 1989 hence the oil pollution act of 1990, by the way it ran aground on good Friday.