When the NBA MVP race is this close, it comes down to wins. When the stats fail to reveal a clear winner, when neither James Harden nor Russell Westbrook can claim superiority in one area without being countered in another, victories become the tiebreaker.

Following that logic, Harden should win the 2017 NBA MVP award.
Yes, Westbrook is averaging a triple-double which is insane! But Harden is averaging 56.4 points accounted for a game this year. That’s 56.4 points a game created by one player, either through shots or assists. 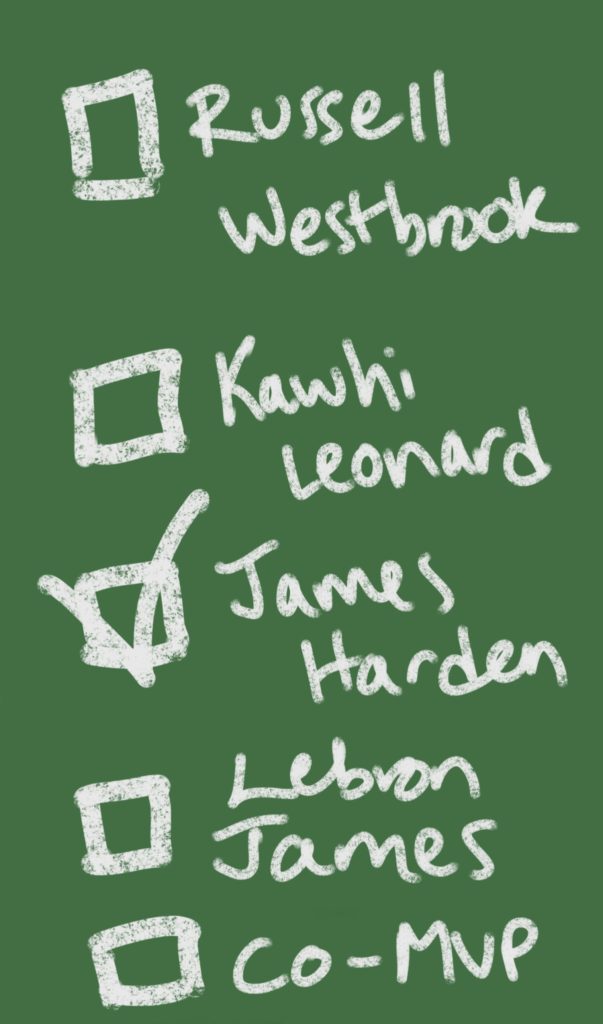 Westbrook leads the league in player efficiency rating, another solid MVP benchmark. There’s a counter for every argument but one: wins.
Harden’s Rockets have secured the third seed in the west while Westbrook’s Thunder was only able to sneak in at the six spot. With that, Harden is the rightful MVP.

Almost no one likes Draymond Green, and for good reason: He plays dirty, as Steven Adams can tell you, and he can be incredibly annoying. That said, he’s still the best defensive player in the league this year.

Honestly, I think there’s a serious case to be made that he’s been the best defender in the league for the past few years, but that’s a different debate.
No one else in the NBA quarterbacks a defense like Green does. He’s constantly moving and talking, the heart and soul of a very good Warriors defense.

He’s tied for the league lead in steals with John Wall, and he’s 14th in blocks.
Opponents shoot just 40 percent when matched up with Green, per NBA.com. That number rises to only 48.2 percent from inside six feet. Just for reference, opponents shoot 49 percent against Rudy Gobert, who’s quite a bit larger than Green.

Gobert and Kawhi Leonard are both fantastic defenders, but they just can’t compare with what Green does on defense.

He’s the most versatile and effective defender in the NBA, and that’s why he’s my Defensive Player of the Year.

Joel Embiid was the best rookie in the NBA this year. That’s why he should get the award.

It’s really that simple. I realize he only played in 31 games, but that doesn’t matter.

Just because Malcolm Brogdon and Dario Saric played all year doesn’t mean they were better rookies than Embiid.

In only 25 minutes per game, Embiid averaged 20.2 points and 7.8 rebounds, all while giving Philadelphia the first breath of basketball hope it’s felt since “The Process” began.

When Embiid was on the court, he was as dominant as any rookie I can remember, holding his own against players like DeMarcus Cousins and Anthony Davis.

There’s no way that Brogdon (10.2/2.8/4.3) or Saric (12.8/6.3/2.2) match up with what Embiid did, even taking into account the missed games. Were this the MVP award, I could agree with the pro-Brogdon/Saric arguments. This is the Rookie of the Year Award, though, and Embiid is far and away the most deserving candidate.

It’s hard to feel good about giving any award to a player with a slash line of 7.6/4.0/3.4. Those are solid numbers for a role player but they don’t exactly scream “Sixth Man of the Year” at first glance.

That’s why it’s important to go a little deeper with Andre Iguodala.
Eric Gordon and Lou Williams have flashier stats, but Iguodala has been absolutely essential to the Warriors, particularly after Kevin Durant went down with a knee injury.

Iguodala’s 4.5 assist-to-turnover ratio is the best in the league, a demonstration of how he steadies the occasionally turbulent Warriors offense.

He’s still a top-notch defender, too, with a solid 101 defensive rating. A scoring average of 7.6 points per game makes Iguodala an unexciting award candidate, but the rest of his stats make him a deserving one.

Coming into this season, there were essentially no outside expectations for James Johnson. He was a largely anonymous veteran backup on a one-year, $4 million deal who had never averaged double-digit points per game and hadn’t played much the season prior.

Over the course of this season, Johnson became one of the linchpins of Miami’s stunning drive to playoff contention, averaging career highs in points (12.8), rebounds (4.9), assists (3.6) and three-point percentage (34.5 percent, up from 30.3 the year before).

If that’s not enough to win Most Improved Player, then I don’t know what is.

The Houston Rockets finished one game ahead of the Utah Jazz for the Western Conference eighth seed with a 41-41 record last year. They were dysfunctional and depressing.

Harden seemed disinterested at times while Dwight Howard was clearly disinterested at all times. Mike D’Antoni turned this team around.
The Rockets were projected to finish 11th in the Western Conference this season by Bleacher Report but, instead, they’re the third seed with more than 50 wins.

Unsurprisingly, D’Antoni’s offensive system has pushed the Rockets from 106.5 points per game last year to 115.2 this year, behind only the Golden State Warriors.

Golden State’s Steve Kerr, Washington’s Scott Brooks and Boston’s Brad Stevens are all very strong candidates for the award, but none of those coaches have accomplished anything close to the kind of job D’Antoni has in bringing his team from the infighting and apathy of last year’s Rockets to the excellence of this year’s version.