Another week of men’s tennis is in the books, as the UCSB men’s tennis team put up yet another stellar performance. With a 7-0 rout over Saint Mary’s and a 5-2 victory against UC Davis, the Gauchos’ undefeated streak extended to seven consecutive meets.

Following these results, Santa Barbara now stands at a 14-5 overall on the season as well as 2-0 in Big West Conference play. 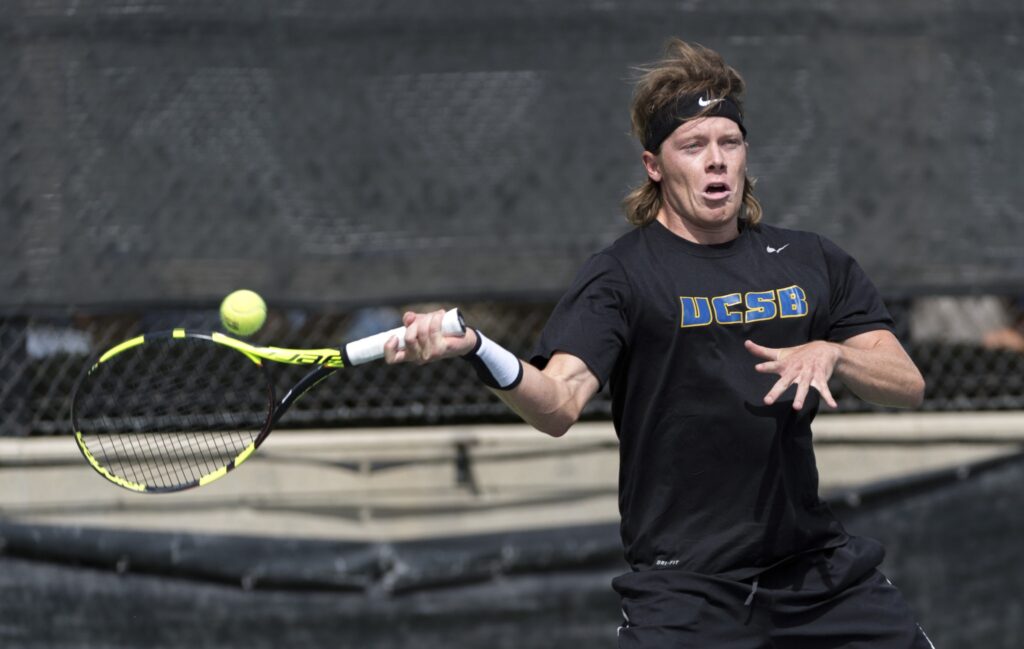 Saint Mary’s is now 6-14 and 1-5 in WCC play after losing its fifth-straight meet. UC Davis had its unblemished start to conference play ended as the Gauchos handed them their first Big West loss and now sit at 11-7, 2-1.

This is the third dual-meet weekend in a row that UCSB has swept its opponent. The Gauchos last dropped a match in their March 13 meet against No.9 TCU, and are currently undefeated ever since.

Their April campaign is also off on the right foot, as the victory over UC Davis leaves them at 2-0 in conference play and will elevate them to first overall in Big West standings.

Sunday’s meet began with the doubles portion of the meet per usual, with the exception that Morgan Mays dropped to court 2 and Anders Holm was raised to court 1. Regardless, both courts won their match and court 3 ultimately went unfinished as UCSB had already clenched the doubles advantage point.

UCSB’s Chase Masciorini and his pair of 6-3’s were enough to give the Gauchos the early 4-0 decider at the halfway mark.

This was only UCSB’s fourth 7-0 sweep on the season, with the last one coming back in early March against Loyola Marymount University.

With regard to Monday’s matchup, UC Davis came in with fine form as it searched to extend their two game win streak. This match added even more pressure considering it was a Big West meet and ultimately the decider for first overall in conference standings.

The doubles portion began in favor of the home side as the Aggies clenched the doubles advantage point. Court 3 immediately went to the Gauchos thanks to Rakela and Kristian Prior’s 6-1 victory. Court 1 was dropped by the No. 19 duo of Freund and Mays to David Goulak and Tommy Lam at a score of 6-4. Court 2 also went to UC Davis at a 6-4 result thanks to Bryce McKelvie and James Wade.

Freund’s singles dominance continued after he brought the score to one-all with his 6-3 / 6-0 showing. Mays replicated a 6-3 / 6-0 result of his own after defeating Alec Adamson, thus putting UCSB at a 2-1 lead.

Then Holm bested Everett Maltby with a pair of 6-4 vcitories as Moreno also won by a score of 7-6 / 6-2. Rakela put up the final Gaucho point of the day with a 7-5 / 7-6 result, and Masciorini conceded a pair of 6-4’s to Max Pham; bringing the meet’s final tally to 5-2. Granting both a conference win for UCSB and yet another league weekend sweep on the road.

Conference play resumes this weekend as UCSB will be away at UC Irvine on Saturday, April 15 at 1 p.m., then back at home on Sunday, April 16 versus UC Riverside at 10 a.m.