Thanks to fast six-run start through the first three innings of the game, the UCSB baseball team was able to secure a fairly easy 10-3 victory against the University of Nevada at Caesar Uyesaka Stadium on Tuesday afternoon.

“We had a good performance from our starting pitcher, he was really pounding the zone and he got ahead early on hitters, and were in a rhythm defensively. Today was an overall good day,” Assistant Coach Eddie Cornejo said.

Despite the win, Santa Barbara is still struggling this year, finding themselves with a disappointing 13-17 overall record through 30 games. The Wolf Pack falls to a 9-25 record on the year and lost to the Gauchos for the second consecutive season.

Coming off a tough, walk-off loss on Sunday, UCSB responded the right way against Nevada. Freshman Ben Brecht had a wonderful game on the mound, and multiple hitters came up big throughout the contest to help the Gauchos secure their 10th home win of the year. 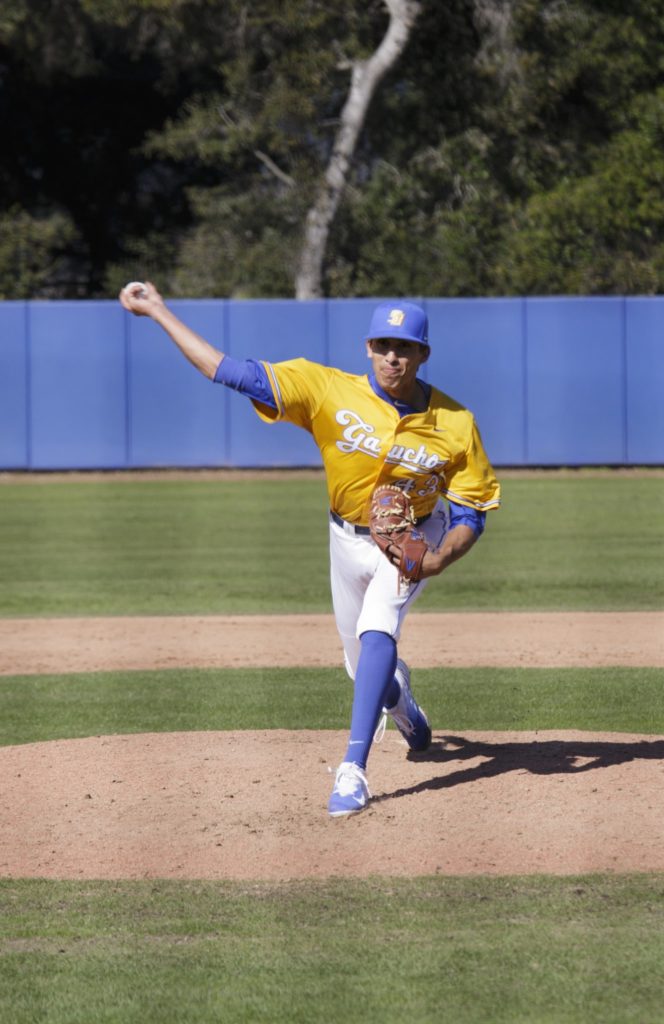 In the first frame, the Wolf Pack pounced on the home team, getting a double from its lead-off hitter, senior shortstop Justin Bridgman, and a single from junior first baseman Jordan Pearce. Even with runners at the corners with no outs, Nevada only mustered one run off a sac fly RBI that made the score 1-0.

The Gauchos answered back in the bottom of the first after redshirt junior utility Kenny Corey ripped a double down the third base line scoring two runs.

Corey then came around to score after redshirt sophomore Tommy Jew singled up the gut, making the score 3-1 in favor of Santa Barbara after one inning. Corey would finish the day two for four with three runs batted in and two runs scored.

Nevada again had a chance to score more runs in the third inning as it had runners on the corners with only one out; however, again, the Wolf Pack was unable to rally more than one run thanks to great command from Brecht. The right-hander pitched 6.1 innings striking out five batters and allowing only five hits and one earned run en route to his second victory of the year on his third consecutive midweek start.

“It’s important for out starting pitcher to feel comfortable and once we are able to get a lead and he can now settle in and pitch with more confidence,” Cornejo said.

With the score 3-2 heading to the bottom of the third, the Gauchos were in need of a big play to separate themselves from the Pack. Redshirt junior JJ Muno delivered the goods with a three-run shot that carried down right field giving UCSB a much more comfortable 6-2 lead after three innings.

“J.J. [Muno] landed the big blow today which allowed us to carry some momentum, and we really strung together a lot of good at-bats,” Cornejo said.

The home run would be the shortstop’s only hit of the day, but he has now registered a hit in 10 of his last 11 games.

Santa Barbara would go on to score one run apiece in the fourth and fifth inning making the score 8-2 courtesy of a Wolf Pack error and a sac fly RBI from freshman catcher Eric Yang, respectively.

With the game practically decided, the Gauchos added two more runs in the bottom of the eighth before Nevada mustered another run in the top of the ninth, making the final score 10-3 once all was said and done.

Despite allowing two hits and the earned run, pitcher Chris Lincoln looked strong on the mound in the final frame, striking out two batters and showing great velocity on his fastball. The freshman will continue to have an increased role so long as his play continues at a high level.

At the end of the day, this was a game the Gauchos were supposed to win, and they did. But with the struggles that have plagued this team as the season has gone, UCSB has to be happy with the win. Now, it has to go out and win a conference series.

Santa Barbara continues Big West play with a three-game set against UCI which begins this Thursday at 3 p.m. at Caesar Uyesaka Stadium.