A quick search for “Deltopia” on the Daily Nexus website is an easy way to digest the first weekend of Spring Quarter in years past. The celebration was birthed from the demise of Floatopia, after law enforcement tightened up on beach access due to the trashing of I.V. beaches. Isla Vistans did the only reasonable thing and moved the party off of the public beaches and right into their neighborhood. The “keep it local” campaign was key in 2014, but, as we now know, it didn’t quite accomplish its goal.

My earliest memories of Deltopia are that of thousands of people flooding Del Playa Drive the first weekend of Spring Quarter in 2014, yet there was a general understanding that Isla Vistans weren’t too keen on letting out-of-towners nor freshmen they didn’t know into their homes to party.

There were tons of police from all over the state in the following years, as well as many mounted on horses intermixing with the young, drunk crowd. The riots — though I hesitate to call them that as I feel like riots typically have even the vaguest sense of direction or understandable cause — were unfortunate and largely fueled by visitors, not UCSB students or other Isla Vistans.

They really sucked, and everyone’s parents heard about them and wondered what the hell their kids were doing while we were here getting lit up by tear gas and rubber bullets.

The keep it local vibe seemed to take hold after this with regard to Halloween and Deltopia. This was necessitated in large part by the absurd number of police walking the streets of the 1.8 square miles that is Isla Vista.

“Don’t come here; you might get arrested, and you probably will step in a giant pile of horse shit,” I’d warn my friends. The university getting involved with The Warm Up concert series definitely helped warm Isla Vistans to the idea of a locals-only weekend. Now more than ever before, out-of-towners would simply be out of place with a concert on campus they technically couldn’t attend.

The last four Deltopias have brought on fliers in all colors, helpful infographics and maps and reminders to be safe and stay hydrated during the day. Yet, if you were to look for advertising, a set list or just the organizers of this event, all you would find is 40k in wasted university funds…to keep people away. 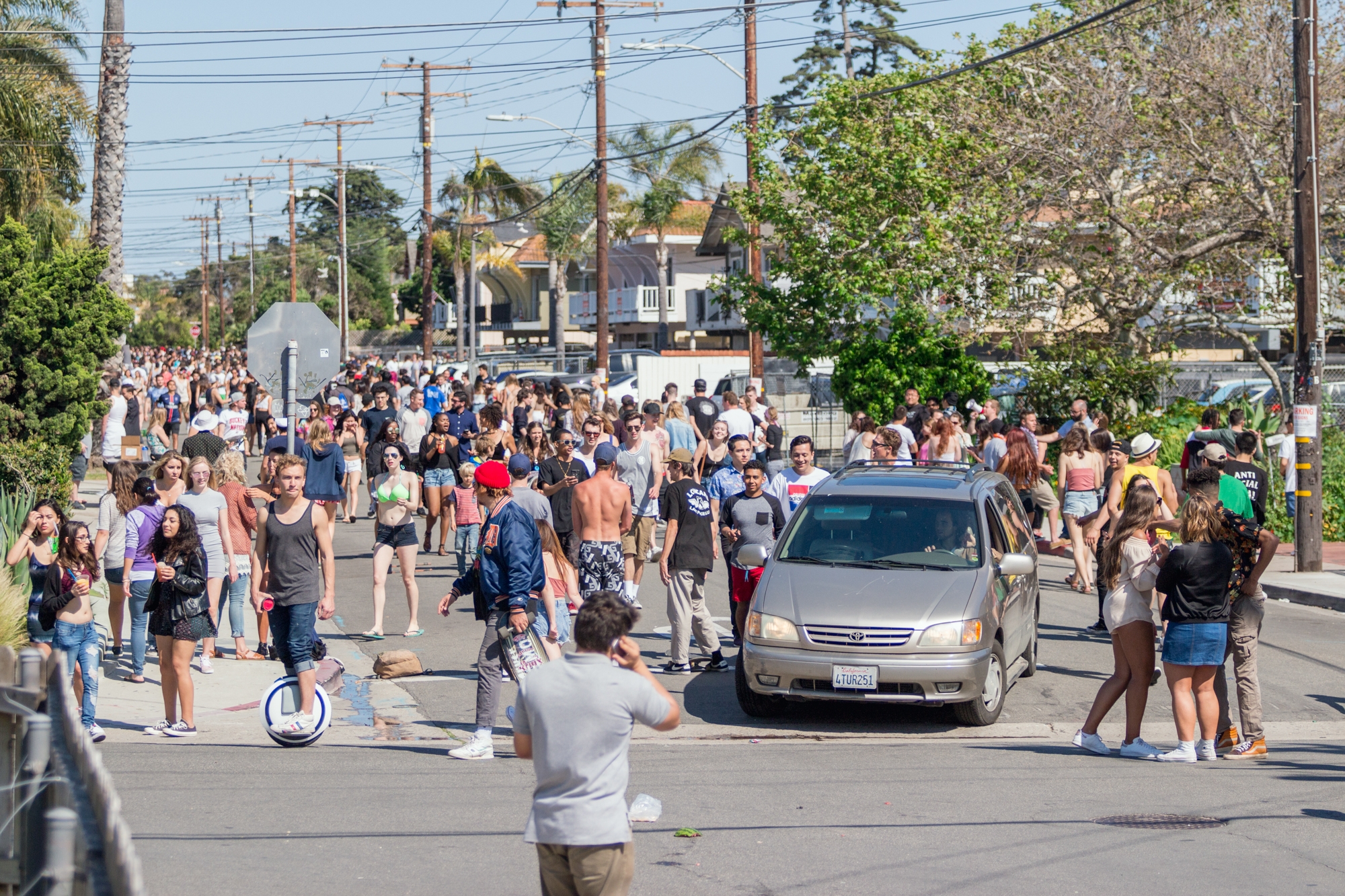 I can’t say definitively that these ads actually drew people in, but any press is good press. This becomes confusing when nobody besides the university is involved in any form of advertising, good or bad. Telling us not to come makes no sense; we live here. Telling people around the state not to come reminds them that “Oh yeah, something goes down the first weekend of the quarter in I.V.”

It’s like expecting people to read that disclaimer at the beginning of every episode of “South Park” that says the following content should not be viewed by anyone and actually decide right then that they’d better stop watching.

Wasted funds aside, the words “festival ordinance” will always carry a negative connotation for me now. I’ve learned its meaning so as to avoid tickets and understand what exactly I am allowed to do when the county declares the entire town I live in a part of a festival.

If there is a festival ordinance in I.V., there should probably be an actual festival in I.V., too.

A festival with no organizers, ads, entertainment, ticket sales, planning whatsoever or even a cool logo to slap on merchandise. It’s one thing to deal with the inconvenience of this type of ordinance when you actually have some semblance of an organized festival to enjoy. The fact that the first weekend of Spring Quarter magically necessitates stricter laws on music, ones that nobody else in the county are subject to, and a heightened level of policing unique from any festival I’ve ever been to or heard of, is ridiculous.

In I.V., we’ve felt the police presence and the stigma around our campus due to celebrations past, and we were damned if we partied and damned if we wanted to challenge the police on rules we didn’t need.

Residents are subject to roadblocks, and if we want to exit and re-enter the town we live in by car, we are forced to purchase a parking pass from the university to park elsewhere. This to me is the most egregious restriction for people who apparently live in the wrong place at the wrong time. If there is a festival ordinance in I.V., there should probably be an actual festival in I.V., too. 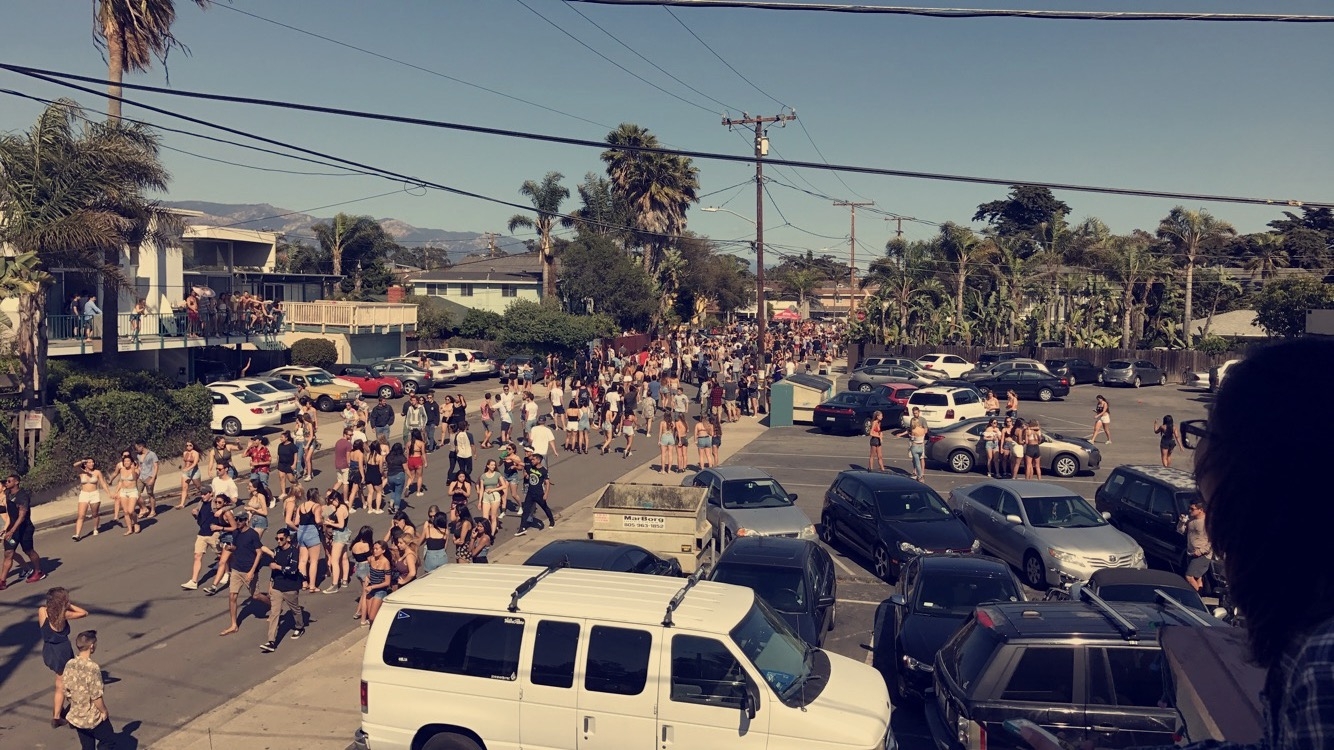 While it may seem like I am poo-pooing everything about Deltopia, hold tight, I’m not. This most recent Deltopia was my favorite of the past four, by far. The police made 42 arrests, three less than last Deltopia and 60 less than in 2015. Crowds were estimated at 3,500 in 2016 but rose to between 6,000 and 8,000 this year. The numbers from this year really don’t make much sense.

If you were on DP during Deltopia the last two years, you would say it was smaller this year, but the fact is that according to the Sheriff’s department, attendance went up while arrests went down.

What needs to be remembered is that I.V. is home to 23,000 people the rest of the year, most of whom are students. It should not be an issue if around 25 percent of the town’s population gets together on DP on the first weekend back from break to welcome the Spring Quarter.

I would wager the vast majority of those walking DP this past weekend live in I.V. or on campus and as such should not be labeled a “crowd” for hanging out in the town they live in. An estimated 7,000 people in a town of 23,000 spending the first Saturday together does not warrant a special ordinance, roadblocks or an increased law enforcement presence. It does, however, allow for a kick-ass time.

If we want to keep it local and throw a big ol’ block party for ourselves the first weekend of Spring Quarter, we absolutely fucking should.

The number of police was still far too high, but there have been less and less each year. The roadblocks absolutely need to go, but my sole interaction with police at one of the blocks was pleasant and helpful as I drove out of I.V.

If we want to keep it local and throw a big ol’ block party for ourselves on the first weekend of Spring Quarter, we absolutely fucking should. The number of out-of-towners seemed to be lower last weekend. Walking the streets, I saw many more familiar faces than in years past.

This is in part a result of knowing more people than previous years but also that of an increasingly local crowd. People seemed to be walking to and from places and talking with one another instead of searching the houses for an open door or gate to exploit.

We were told local is better, to keep I.V. safe by those who don’t even live here, and we’ve come a long way in doing so. Deltopia is amorphous, largely unplanned but unique and beautiful at the same time.

People were in their yards early, bouncing around from house to house in the perfect weather and interacting with their neighbors in a way only possible in I.V.

It would be infinitely more concerning if the sun-soaked streets of I.V. were barren the first week of spring, leave for the anxious cops. Fortunately, we never reached that point.

This year was a turning point for Deltopia. Among everyone I’ve talked to who has experienced the last four, this one was the best. It was my last Deltopia, but I have no doubts that this tradition, however you want to define it, will continue in years to come. I can just hope that Isla Vistans can continue to enjoy it, as we tend to do with every other weekend of the year.

Jackson Kerr hopes you had a killer weekend.

“They really sucked, and everyone’s parents heard about them and wondered what the hell their kids were doing while we were here getting lit up by tear gas and rubber bullets.”
Was unaware the daily nexus was posting poorly written, sensational pieces with no motive other than shooting out Deltopia headlines.