Spring is now upon us, and I am pleased to announce that the verdant magicks of the Santa Ynez hills have been fully rejuvenated by this year’s abundant rainfall. In just a little over a week, from April 7-9, Santa Barbara’s own Live Oak Campground will be transformed into a cornucopia of sight and sound as the Lucidity Festival congregates there for its sixth meeting. The finale to Lucidity’s six-year story arc beginning in 2012, this year’s celebration will be ripe with music, workshops, yoga, art and tasty, locally sourced food.

For its sixth year, the community has adopted Eudaimonia as its theme, a concept with origins in ancient Greek philosophy. Alison Hensley, Lucidity’s food and sustainability head, describes Eudaimonia as a complex concept with many various interpretations: “It’s the good composed of all goods. An ability which suffices for living well. Perfection in respect of virtue. Resources sufficient for a living creature.” If these words do not fully capture the spirit of Eudaimonia, perhaps that is because no words can.  If you desire to learn more, maybe a more direct encounter with the ideal at some kind of transformational festival could provide you with the holistic knowledge you seek.

While many will attend Lucidity this year for its renowned workshops on permaculture, sustainability, spirituality and community-building, the music takes precedence over all for a significant portion of festival-goers. These are the people who drool over newly announced lineups like freshly cooked plates of teriyaki tempeh, and Lucidity’s lineups will not leave them disappointed this year. 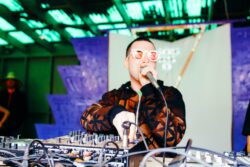 This year’s festival sports a wide variety of musical acts spread across three different stages. The Lucid stage, situated in the festival’s heart, will feature prominent psychedelic dub and drum-n-bas British producers Ott and dBridge, as well as a bounty of other electronic acts.  The Nest, inside of the Lover’s Nest village, seems to be the hub of more intimate, lyrically driven performances by the likes of Canadian world music group Delhi 2 Dublin as well as the faerie-like Ayla Nereo.

Lastly, the Nook stage at the Nomad’s Nook village is set up to be more of a funky, harder-dancing arena toeing the all-too-thin line between group trance and discotheque.  Throughout the weekend the tables will spin hypnotically under the command of Christian Martin, Low Steppa and a panoply of other techno and deep house wizards. One to watch out for among the group is NYC DJ Manik, hailing from Queens; he is able to blend classic and acid house with subtle funk and disco beats in a way few are able to do. The Nook stage will also feature a tribute to beloved Lucidity DJ Nicholas “Pumpkin” Alvarado, who unfortunately passed away in 2016.

The amount of articles about self-care going around social media right now is astounding, so I know there is a chance readers will just tune out these next couple of sentences, but festivals are a space in which self-care is vital! For those of you trekking out to the Lucidity festival next weekend, make sure you pack yourself meals, drink plenty of water and remember to get at least a little sleep! That way, you will be at peak awareness for the strange beast that is Lucidity.

Lucidity Fest tickets are still on sale, and readers can use the code LucidityFest2017 for a special discount.