The Daily Nexus
The Daily Stench
“My Body, My Feet” Movement Aims to End Unwanted Footsy
March 24, 2017 at 2:45 pm by Lane Wright 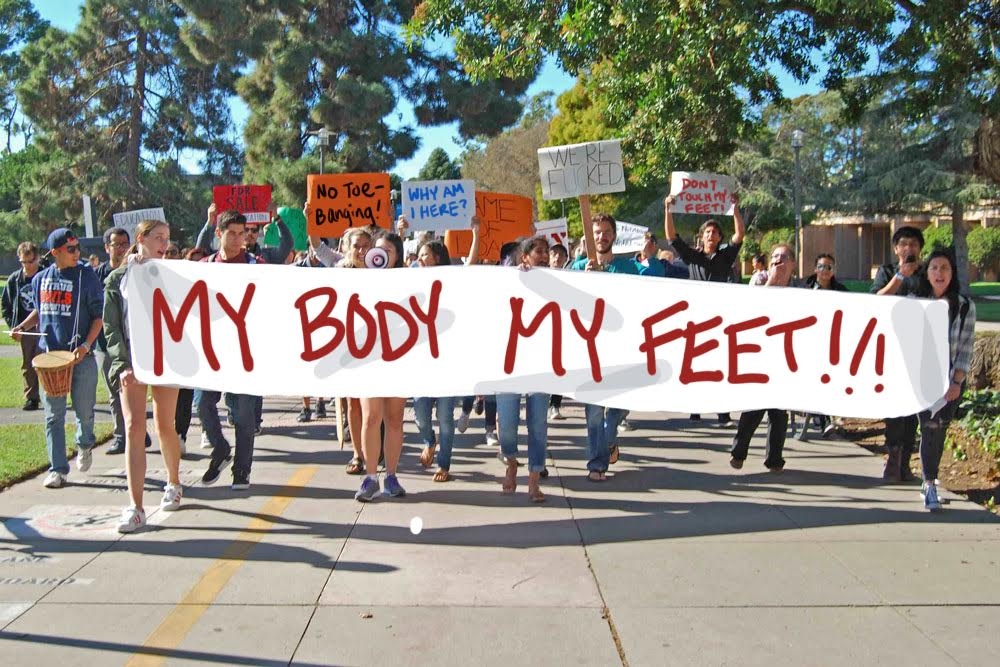 UCSB — On Sunday afternoon, a group of impassioned students forewent their studies in favor of chanting “My body! My feet!” while marching in and around Davidson Library. The crowd, which initial estimates say peaked at approximately 800, marched through the Arbor area and the library’s entrances in a slow-moving circle. Throughout the day, portions of the flood of protesters splintered off and started additional marches around Girvetz and South Hall, contributing to the movement with their own emphatic shouts and painted signs.

After the first two reporters were lost to the crowd — and never heard from again — a third reorter, Jared Cahill, was finally able to get a quote from a march participant. Bill Williams, a third-year economics major, summed up the reason for his involvement by saying, “The purpose of the march? Shit, I don’t know, I’m just procrastinating … I thought that’s what everyone else was doing.”

“The purpose of the march? Shit, I don’t know, I’m just procrastinating … I thought that’s what everyone else was doing.”

After speaking to several students who gave the same response, Cahill found the source of the march when he spoke to Jennifer Serrano, a fourth-year biology major. Serrano told us that earlier today she was studying in the “peaceful silence” of the seventh floor, in one of the many corral-desks, with some person on the other side of the partition. All of a sudden, she felt his foot touch her foot under the desk, and she stood up in a fury. “I told him, ‘this is the last fucking time someone ‘accidentally’ touches my foot! MY BODY! MY FEET!’” Serrano told us. “And then the bastard tried to claim, like they always do, that it was accidental. I just told him that there was no way it was an accident.” She evidently shouted “MY BODY! MY FEET!” another time, this time with the support of many others on the seventh floor.

According to further accounts of the event, the entire seventh floor quickly began to shout with Serrano, repeating the cry for justice and recognition of what they claimed was “like a totally fucked up micro-aggression.” As the chants started to ripple through the library, more and more students came to see what all the noise was, and so the movement began. The massive number of once-studious undergraduates poured down the stairs and out of the building to begin their march.

While many participants didn’t know what was going on, there were a fair amount of students who seemed to relate to the issue and were fighting strongly for the cause. Many hastily made signs could be seen with such phrases as “I’m here to studying, not to toe-bang!”, “At least wear socks!” and “It’s ‘keep your feet to yourself,’ too!”

The protest continued until around 12 a.m., when the crowd was told that the noise ordinance would mean that they’d have to leave.

Dam I look good in this picture